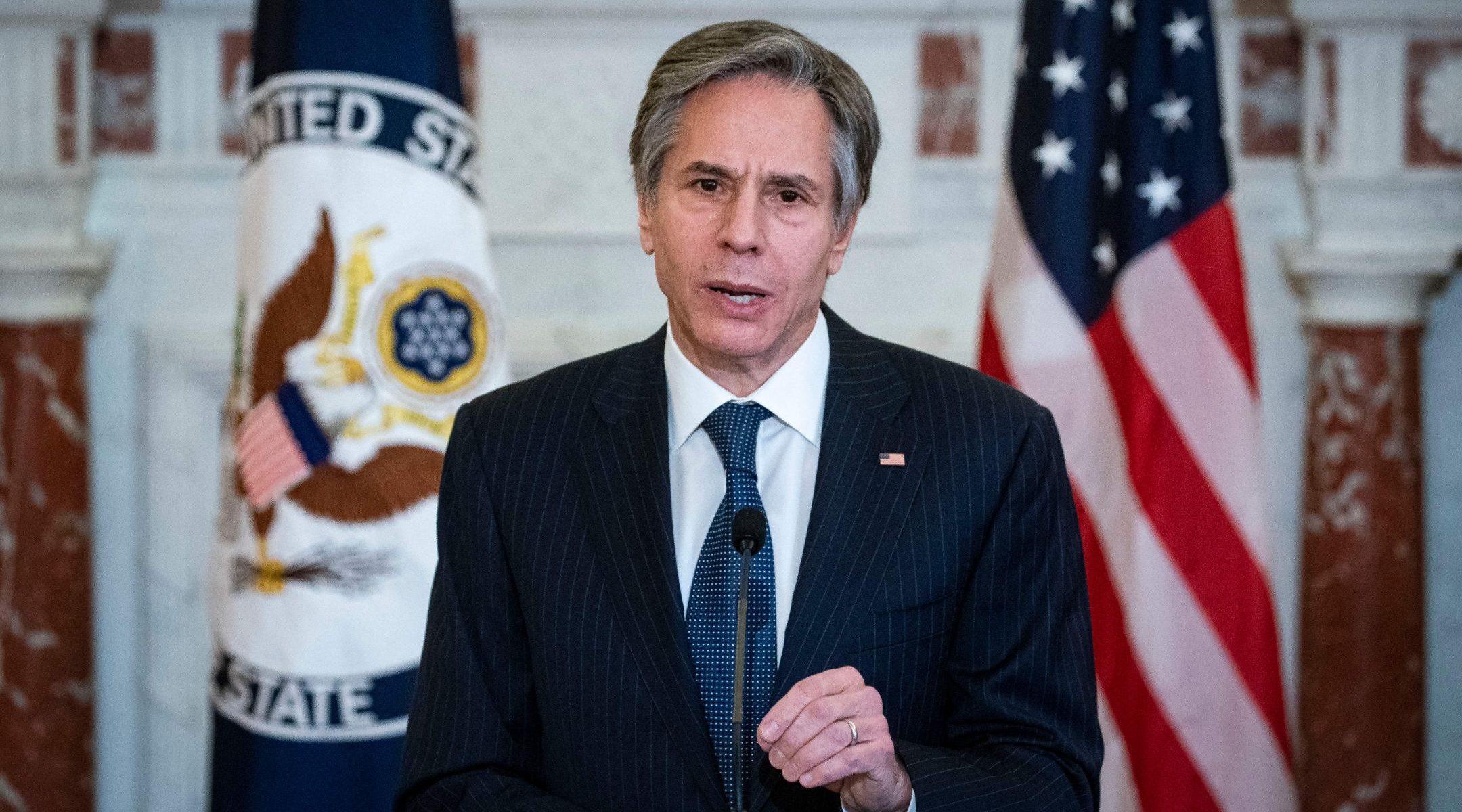 Secretary of State Antony Blinken speaks about U.S. leadership in fighting the global COVID-19 pandemic during an event at the State Department, April 5, 2021. (Alexander Drago/Pool/AFP via Getty Images)
Advertisement

WASHINGTON (JTA) — Holocaust Remembrance Day commemorations are by their nature calls for accountability for atrocities past and present.

Antony Blinken, the U.S. secretary of state, used the occasion to take his own department to task for its neglect of Jews during the Nazi era, and to call for action on behalf of the persecuted today.

Blinklen, delivering the keynote address Thursday at the event organized by the U.S. Holocaust Memorial Museum, savaged the World War II-era assistant secretary of state, Breckinridge Long, for blocking the entry into the United States of Jews fleeing Nazi Europe, and for lying to Congress about it.

“He had immense power to help those being persecuted,” Blinken said at the event, this year presented virtually because of the coronavirus. “Yet as the Nazis began to systematically round up and execute Jews, Long made it harder and harder for Jews to be granted refuge in the United States.”

Blinken, who has said he was shaped by the story of his stepfather’s Holocaust survival, said Long’s failures were a lesson for U.S. policymakers today, pointing both to attacks on minorities in the United States and the need to speak out for those oppressed abroad.

Perhaps the most pronounced difference Biden officials have sought to make with the Trump administration is in the treatment of minorities and the championing of human rights. President Donald Trump was seen as peddling bigoted rhetoric and fueling domestic hatred, and diminishing U.S. advocacy for human rights overseas.

Blinken’s spokesman Ned Price, alerting reporters to the speech, made explicit the connection between the Holocaust and the current day.

“We remember not only what happened, but also how it was allowed to happen,” he said. “We remember to look at the institutions and societies we are part of and to understand better what they do and what they did not do.”

Also delivering remarks for Holocaust Remembrance Day was Jill Biden, the first lady, who recorded a video address for the Jewish Federations of North America.

Biden in her remarks focused on assistance for elderly Holocaust survivors, praising Jewish Federations for its programs funded in part by the federal government under an initiative launched by President Joe Biden when he was vice president.

“Today 80,000 survivors live here in the United States and far too many wrestle with trauma and poverty,” she said.