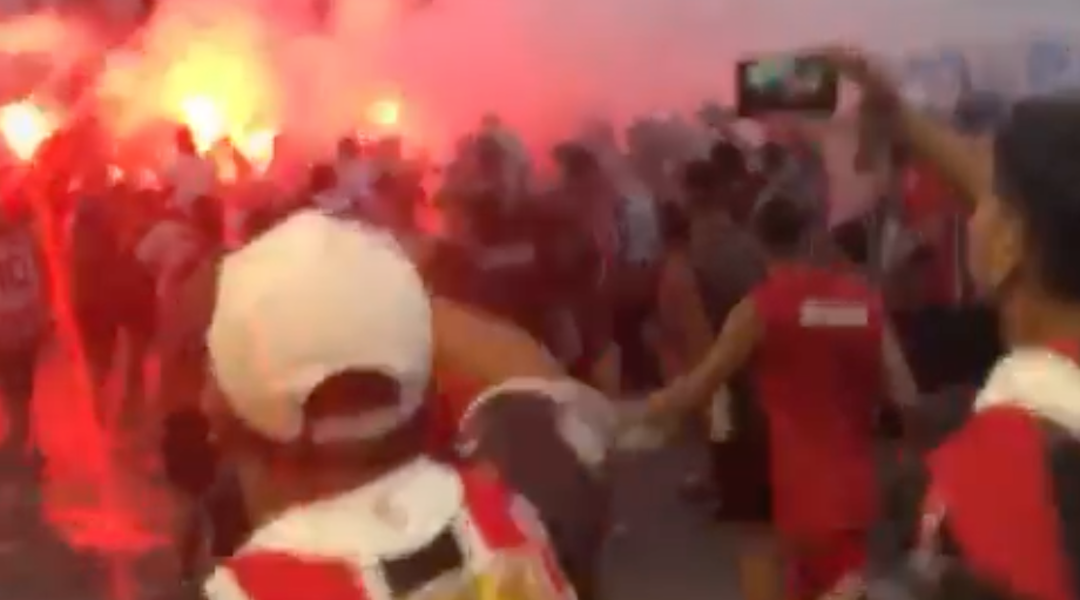 A screenshot from the viral video of Chacarita fans chanting an anti-Semitic line shows them marching near a bonfire on the street. (Screenshot)
Advertisement

(JTA) — Fans of a Buenos Aires-based soccer team chanted about “killing the Jews to make soap” before a game against a team with a history of Jewish fans.

The Argentina umbrella Jewish organization DAIA filed a criminal complaint Tuesday against the fans of Chacarita Juniors based on a video from March 16 that went viral on social media in Argentina. An often debunked rumor from World War II involved the Nazis making soap from dead Jewish bodies.

“Chaca is coming along the road, killing the Jews to make soap,” the fans chanted in the video.

Chacarita was preparing to play Atlanta, two teams based in Villa Crespo, a Buenos Aires neighborhood with a traditionally large Jewish population. Founded in 1904, Atlanta has historically received support from Jewish fans and featured several Jewish players and administrators.

The teams have been fierce rivals in the second tier of professional Argentine soccer for decades.

“The episode is an incitement to violence, to persecution, to hate, and represents a threat against the Jewish community as a whole,” DAIA wrote in a statement.

DAIA showed the video of the chants in federal court in the Buenos Aires area where the incident occurred.

In February 2000, Chacarita fans greeted the Atlanta team with Nazi flags and threw soap on the field while singing “with the Jews we make soap.” That spurred the Argentina Football Association to establish rules requiring the referee to end or suspend a match due to racist expressions.

Argentina enacted an anti-discriminatory law in 1988 that makes such activity punishable in court.

A year ago, a player from another rival team made headlines for making an obscene anti-Semitic gesture while leaving a game against Atlanta.