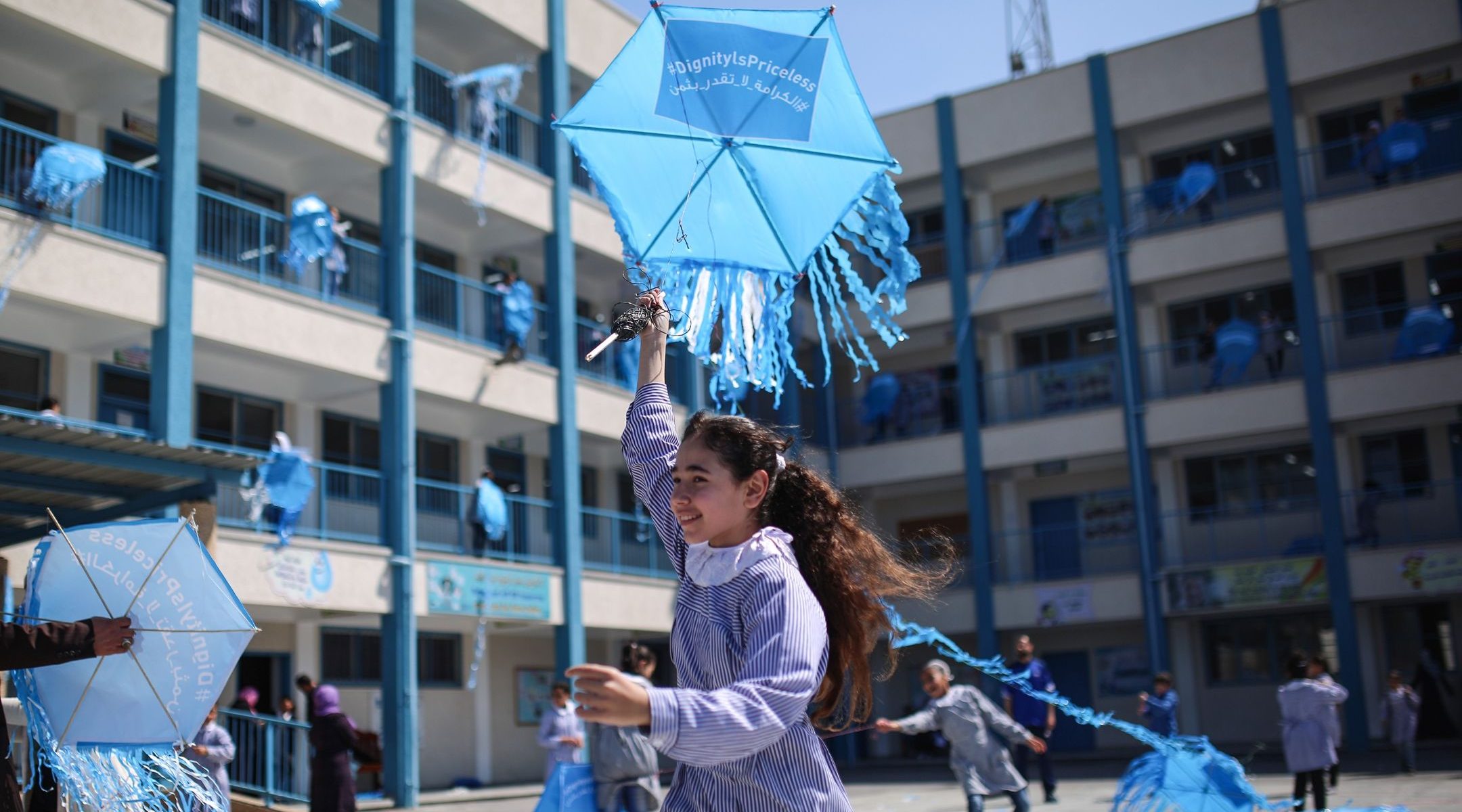 Palestinian children fly kites with the UNRWA logo during a protest in the Gaza Strip against the U.S. move to cut funding for the agency, March 12, 2018. (Mustafa Hassona/Anadolu Agency/Getty Images)
Advertisement

WASHINGTON (JTA) — Days after resuming U.S. funding for the troubled U.N. agency that administers to Palestinian refugees and their descendants, the Biden administration says it has the commitment of UNRWA to “zero tolerance” for anti-Semitism, racism or discrimination.

“UNWRA has made clear their rock-solid commitments to the United States on the issues of transparency, accountability, and neutrality in all its operations,” a senior U.S. official said in an interview this weekend, describing the process that led last week to the administration announcing the resumption of funding for the agency. “And what neutrality means in the context of the United Nations is zero tolerance for racism, discrimination, and anti-Semitism.”

The official said the resumption of aid was consistent with a Biden administration policy of favoring a two-state solution to the Palestinian-Israeli conflict.

A UNRWA spokesman did not reply by late Monday afternoon to a Jewish Telegraphic Agency request seeking comment.

UNRWA has been plagued for years by reports of mismanagement and of anti-Semitic content in the textbooks used by the agency in the school it administers.

The Biden administration official, who asked not to be named in order to speak candidly, reached out to JTA. The call was consistent with what has become a Biden administration practice: rolling back Trump administration policies that Israel favored, but leavening the change with pledges and actions that reassure Israel of U.S. support. A similar dynamic is playing out in the administration’s bid to reenter the 2015 Iran nuclear agreement.

President Donald Trump ended assistance to UNRWA in 2018. Trump administration officials said the agency’s precept — treating millions of Palestinians as refugees — perpetuated the Israeli-Palestinian conflict. That was the claim by Israel’s U.S. ambassador, Gilad Erdan, in a highly unusual rebuke of the Biden administration when the $150 million in assistance was announced.

Biden campaigned on refunding UNRWA — on humanitarian grounds and to restore American influence in the region.

In January, the Institute for Monitoring Peace and Cultural Tolerance in School Education, a watchdog, reported that UNRWA textbooks were “rife with problematic content that contradicts stated U.N. values.”

The Biden official said the U.S. government is “completely committed to ensuring that U.S. assistance to the Palestinians through UNRWA, like all other U.S. assistance, is delivered consistent with the principles of transparency, accountability, efficiency, effectiveness and neutrality.”

The Biden official rejected the precept that designating the descendants of Palestinian refugees as refugees perpetuated the conflict. The refugee problem would be addressed in a two-state solution, the official said, which was the end goal of the Biden administration.