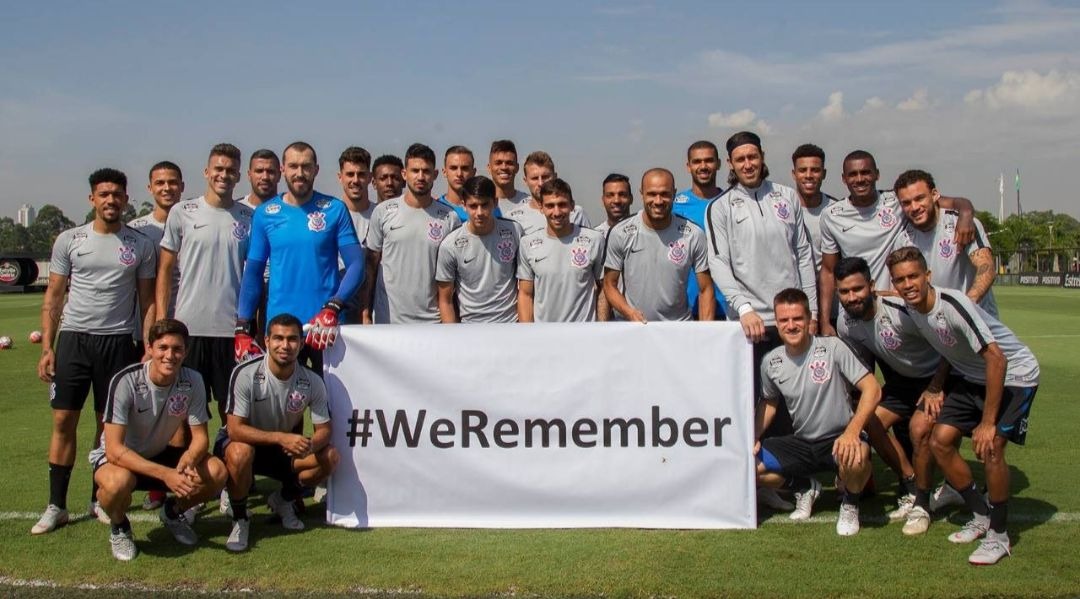 The Corinthians soccer team posed for a picture on the field as part of the World Jewish Congress campaign ahead of International Holocaust Remembrance Day. (Courtesy/Brazilian Israelite Confederation)
Advertisement

RIO DE JANEIRO (JTA) – One of Brazil’s most popular soccer teams joined a global Jewish initiative to raise awareness about the Holocaust and the dangers of anti-Semitism.

The Corinthians took a team picture on the field holding a poster with the hashtag #WeRemember and put it on its the club’s social media channels, drawing nearly 50,000 “likes.” The World Jewish Congress launched the #WeRemember campaign.

“To protect the future, we must honor and remember the past,” the message said. “There will soon be no Holocaust survivors left to tell their stories. It is up to us, and to future generations, to ensure that the world will never forget. Corinthians joined the campaign. Racism, intolerance and discrimination, never.”

A similar photo publicized by the British soccer team Chelsea served as the inspiration for the Brazilians.

“The participation of Corinthians and other teams draws huge attention to the campaign, whose goal is to make sure the memory of those killed in the Holocaust will not be erased in a world where anti-Semitism and the denial of the Holocaust is increasing as the number of survivors is decreasing,” Ariel Krok, one of the Brazilian campaign organizers, told JTA on Wednesday.

“We need to make a strong statement because anti-Semitism today is strong again,” Fernando Lottenberg, president of the Brazilian Israelite Confederation, told JTA.

In November, Corinthians players wore uniforms featuring the names of the 11 Jewish victims of the Pittsburgh synagogue shooting during a Brazilian Championship tournament match in Sao Paulo.