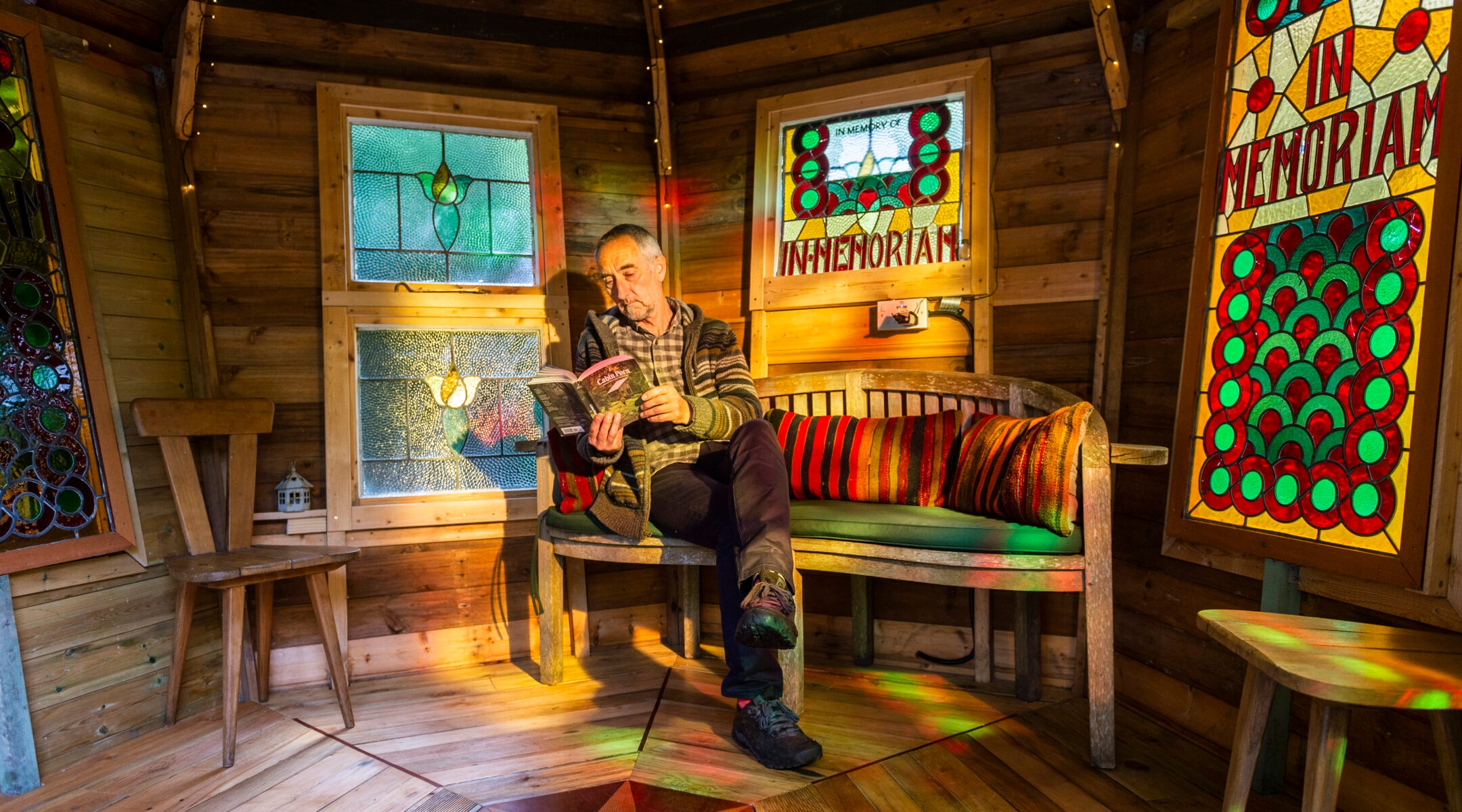 Les Rowe sits amid panels from a Cardiff synagogue in his "Tranquility Base" shed. (Cuprinol)
Advertisement

(JTA) — After the Cathedral Road Synagogue in Cardiff, Wales, closed in 1989 amid a steep decline in the local Jewish population, its stained-glass windows went missing.

Now, some of the once-majestic synagogue’s stained-glass panels have resurfaced — in a backyard chicken-coop renovation that a British garden supplies company just declared best budget shed of 2021.

Cuprinol runs an annual shed competition to promote its products, which include both prefabricated sheds and the supplies to build bespoke sheds. This year’s winner in the “budget” category was Les Rowe for his seven-sided “Tranquility Base,” featuring a wooden floor reclaimed from a local church and at least five stained glass panels, several of which say “In Memoriam.” 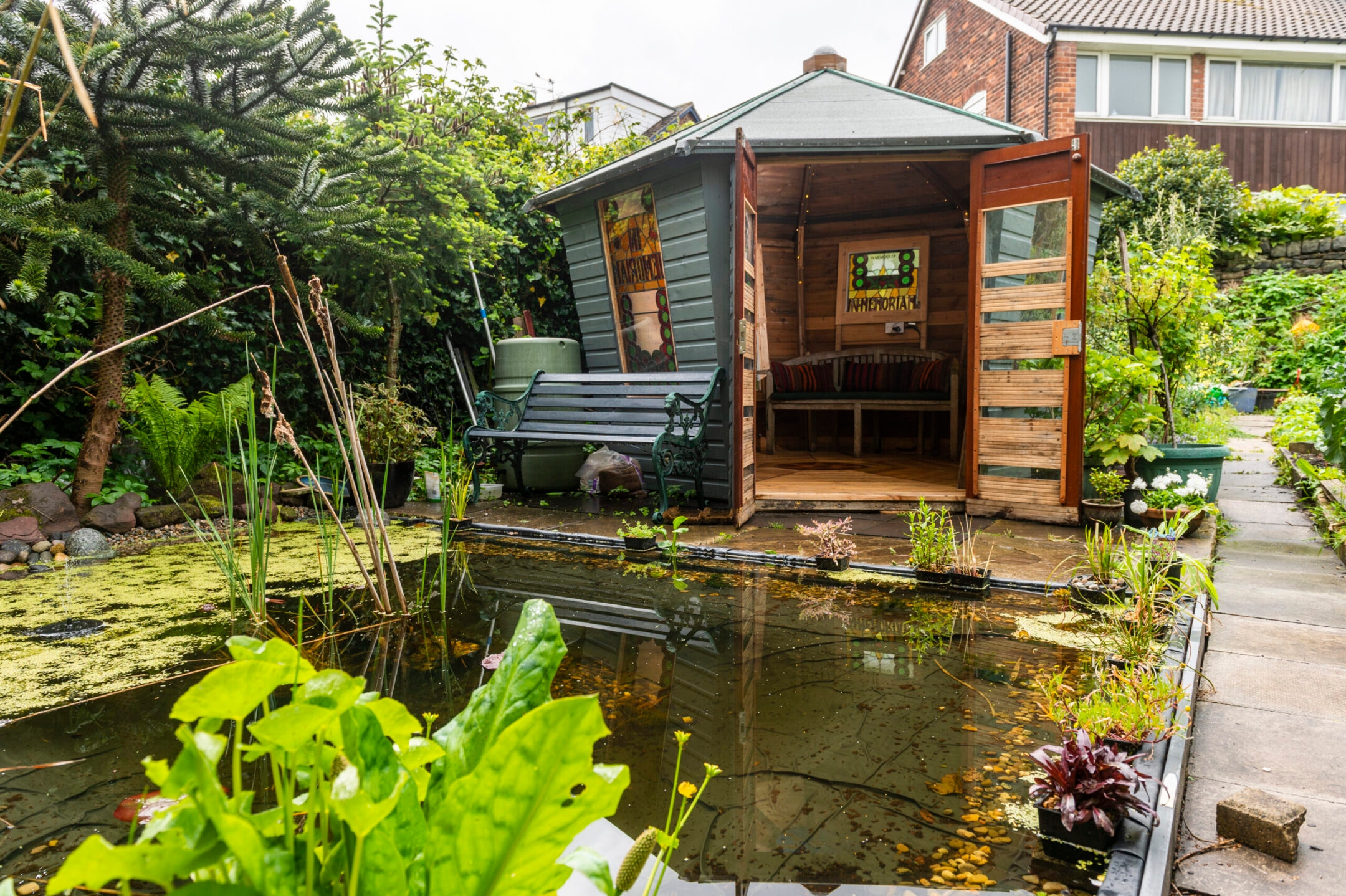 Les Rowe’s award-winning shed in his backyard in Merseyside, England, in May 2021. (Cuprinol)

Rowe told local news media that while he had gotten lots of materials from his friends and family, the panels were from a synagogue in Cardiff and he had purchased them on eBay “many years ago.” (He hadn’t gotten to use them until now, he said, because he had to wait for his chicken to die to free up space in his yard.)

While some of the news reports about Rowe’s shed has noted the windows’ origins, none has identified the synagogue from which they came. But identical panels featuring a pattern of overlapping red and green circles are clearly visible in photographs taken before the Cathedral Road Synagogue’s closure that are available online through the People’s Collection Wales. 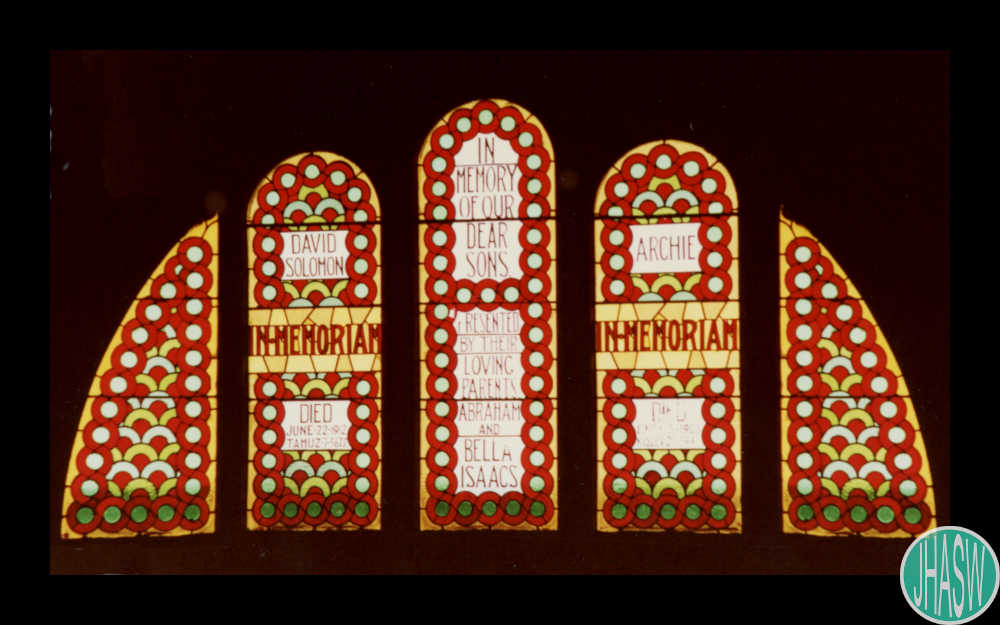 A photograph taken in 1989, shortly before the Cathedral Road Synagogue’s closure, shows the stained-glass windows in their original arrangement. (Alan Schwartz/Jewish Historical Association of South Wales)

The photographs were taken by a representative of the Jewish Historical Association of South Wales, which reported that a local museum stored the windows until 2013. At that time, a representative of the synagogue’s former members offered the windows to relatives of those who had paid for them. No one accepted the offer, so the windows were sold to a salvage firm and the local community lost track of them, according to the association’s notes on the photo archive page.

The panels in Rowe’s shed appear to have been reassembled in a different arrangement from how they appeared in the synagogue, which now houses offices and a parking lot behind a semi-restored facade in a complex called “Temple Court.”

At one point, there were thousands of Jews in Wales, many of whom ended up there when their plans to get from Eastern Europe and Russia to the United States were derailed. Now, according to a 2019 BBC report, there are just a few hundred, almost all in Cardiff, the capital city. Cardiff has one Reform synagogue that does not appear to have a rabbi and an Orthodox synagogue run by a Chabad rabbi. (It’s also the hometown of a Congolese British soccer star named Rabbi Matondo.)