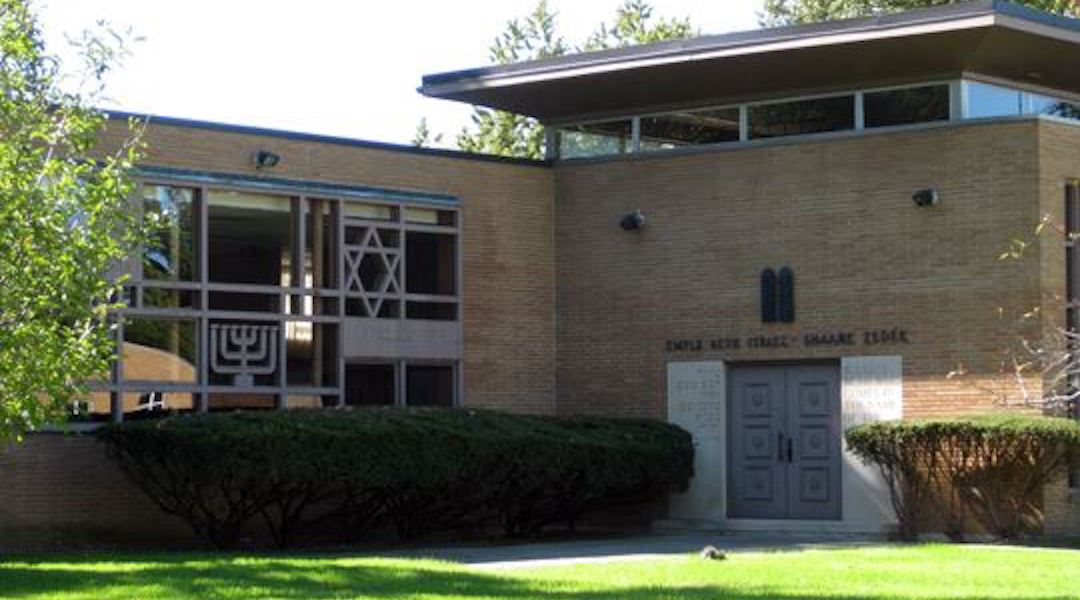 (JTA) — A synagogue in Lima, Ohio, was shot up with what police describe as a BB or pellet gun, although they caution it was likely not a hate crime.

At least two dozen holes were discovered in the windows of Temple Beth Israel-Shaare Zedek on Shabbat, according to the congregation’s part-time rabbi, Howie Stein, who reported the vandalism in a public Facebook post that has since been deleted.

“Friday night, we prayed in a sanctuary with three bullet holes in its windows,” Stein wrote. “Services followed a potluck supper, in a social hall with a minyan of holes in its windows, brought out from a kitchen with twice as many holes in its window. Shabbat morning we found three more holes in the upstairs classrooms, no longer used because of the shrinking and aging nature of the congregation. Thankfully, nobody was in the building at the time, and the damage, while emotionally and physically extensive, was not more significant.”

Sgt. Jason Warren of the Lima Police Department told JTA that the incident, which likely occurred on Friday night, was not being treated as a hate crime. Police are treating it as an act of vandalism because there was nothing besides the bullet holes to suggest an anti-Semitic motive, he said.

Warren said the bullet holes appear to have come from a BB or pellet gun, and that shooting those weapons is a relatively popular activity for kids in the area.

Police have increased patrols around the synagogue, he said. There are no suspects at this time.

“We have kids who think it’s fun to shoot houses and cars,” Warren said. “It’s a pretty common occurrence.”

The rabbi said he called on the congregation to use Shabbat to “focus inward, on our own rest and renewal. We must not allow those who hate, and those who act on their hate, to deter us from our cherished beliefs and practices.”

In a statement released Tuesday, the synagogue thanked law enforcement for their assistance and said that “The outpouring of support makes it clear to us that Jews do indeed have a home in Lima.”

Stein travels to the synagogue, a merged Reform and Conservative congregation, twice a month from his home in Pittsburgh to minister to the congregation. His profile picture on Facebook is the Pittsburgh Steelers’ “Stronger than Hate” logo, created after the attack on the Tree of Life synagogue building that killed 11 worshippers.

Lima is in northwest Ohio, between Toledo and Dayton.