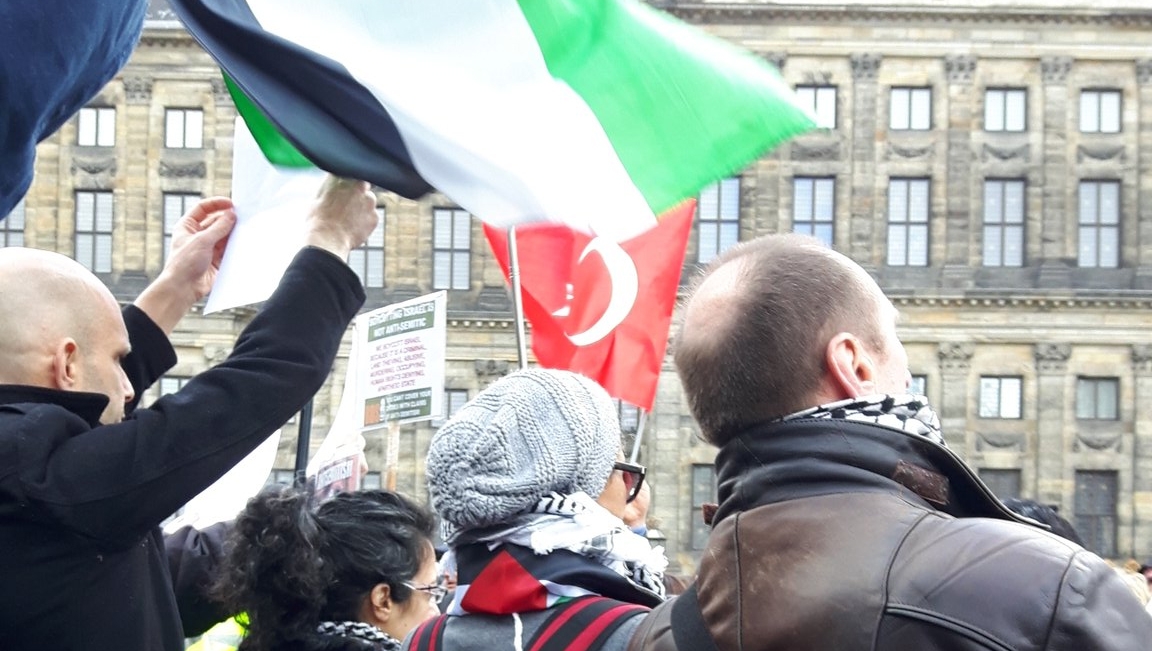 Protesters turning their backs on Dutch Chief Rabbi Binyomin Jacobs during a speech about the Christchurch killings in Amsterdam on March 17, 2019. (Diana Meijer )
Advertisement

AMSTERDAM (JTA) — Demonstrators carrying Palestinian flags turned their backs on a Dutch chief rabbi during his eulogy at a vigil for Muslims killed in New Zealand.

The incident Sunday happened as Rabbi Binyomin Jacobs was discussing the meaning of a minute of silence at the gathering at the Dam Square World War II memorial monument. Thousands of people, many of them Muslims, gathered at the square to commemorate the 49 people slain Friday by a far-right killer at two mosques in Christchurch, New Zealand.

Some protesters had posters calling for a boycott of Israel.

When Jacobs, the chief rabbi of the Inter-Provincial Chief Rabbinate of the Netherlands, got up to speak, several participants carrying Palestinian flags demonstratively turned their backs on the rabbi in what many Dutch Jews on Twitter called a display of anti-Semitism.

Anti-Semitic behavior is commonplace occurrences during anti-Israel protests on the Dam by activists promoting the Boycott, Divestment and Sanctions movement against Israel. They routinely wave Palestinian flags during these bi-weekly gatherings.

Mayor Femke Halsema and several other municipal officials responded to the actions of the protesters who turned their backs on Jacobs on Sunday by standing shoulder to shoulder with the rabbi during his address.

Jacobs urged his listeners to think of “the countless people killed in terrorist attacks one houses of worship and beyond around the world, of which we hear nothing: Not on television, not in the papers and even not on Facebook, but where countless people are being killed.”