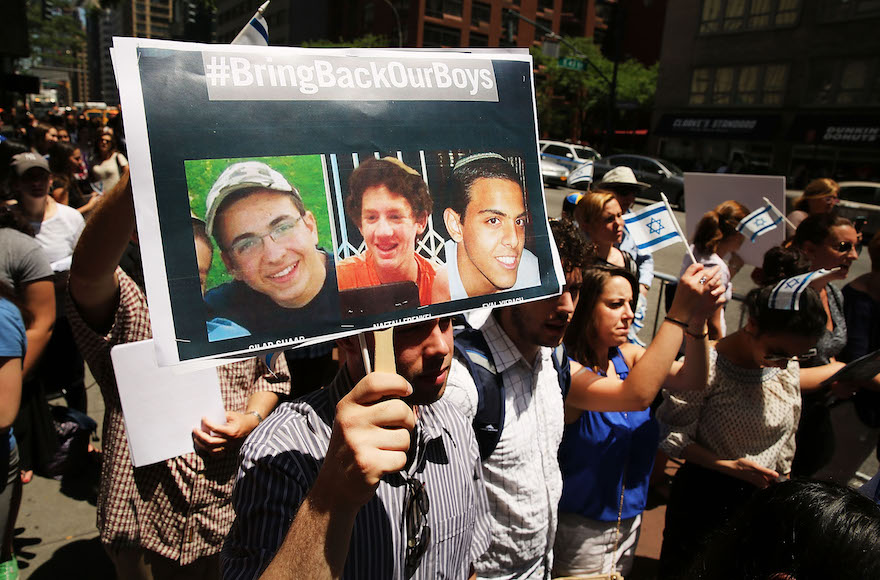 (JTA) — The families of three teenage Israeli boys kidnapped and murdered by Hamas terrorists six years ago have filed a lawsuit against Hamas.

The lawsuit filed in Jerusalem by the Shurat HaDin-Israel Law Center on behalf of the families of Naftali Fraenkel, Gilad Shear and Eyal Yifrach asks for about $150 million from the Palestinian Authority.

The families released a statement saying that a goal of the suit is to stop the Palestinian Authority from transferring money to Hamas, the militant group that runs Gaza and whose military wing claimed responsibility for the abduction and murders, Israeli media reported.

“Of course, this lawsuit does not cure our pain, reduce our grief, or minimize our longing for our children. If the prosecution has the power to deter, even slightly, these evil forces, it will be our reward,” the statement said.

If successful, the lawsuit would result in Palestinian Authority funds being confiscated for the first time as a consequence for a terror attack that was carried out by Hamas, according to Shurat HaDin, an organization that files lawsuits on behalf of Israeli terror victims. The lawsuit says that the Palestinian Authority transfers between $50 million and $100 million per month to Hamas.

The search for the teens, who were abducted June 12, 2014, while hitchhiking in the West Bank, gripped Israel for the 18 days it took for their bodies to be found in a shallow grave in a field near Hebron. A recording of an emergency call made by one of the teens to police and the interior of the car used to abduct them indicated that they were killed shortly after being taken.