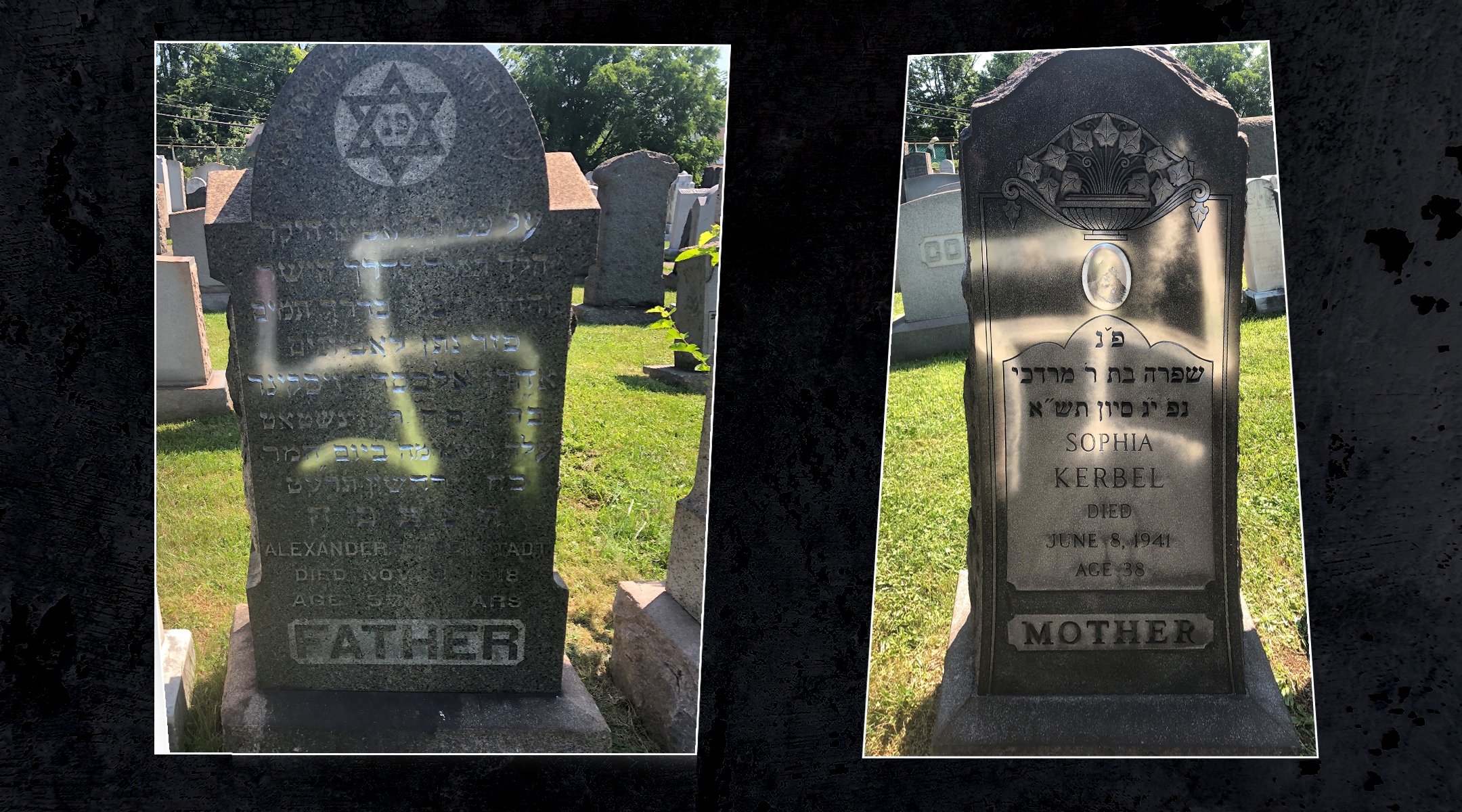 More than a dozen headstones were discovered desecrated at the German Hill Road Jewish Cemeteries in Dundalk, Md., over the July 4 weekend. (Courtesy of Eric L. Goldstein)
Advertisement

(Jmore – Baltimore Jewish Living via JTA) — More than a dozen headstones were discovered vandalized with swastikas over the July 4 weekend at a Jewish cemetery in the Baltimore suburb of Dundalk, Maryland.

“It’s something I’ve never seen in all my years of cemetery-going,” said Deborah R. Weiner, a Baltimore Jewish historian who discovered the vandalism at German Hill Road Jewish Cemeteries when she and a group of fellow Jewish historian friends visited the gravesite on July 4.

The cluster of cemeteries are the final resting places for members of several local congregations, as well as for those buried through the Hebrew Orthodox Free Burial Society.

In addition to swastikas, vandals also defaced a headstone with a tag that appeared to reference Holodomor, the 1930s famine in Soviet Ukraine that killed more than 3 million people. Invoking Holodomor as a way to target Israel and the Jews has become a growing tactic on the far-right, many of whom blame Jews for the famine. 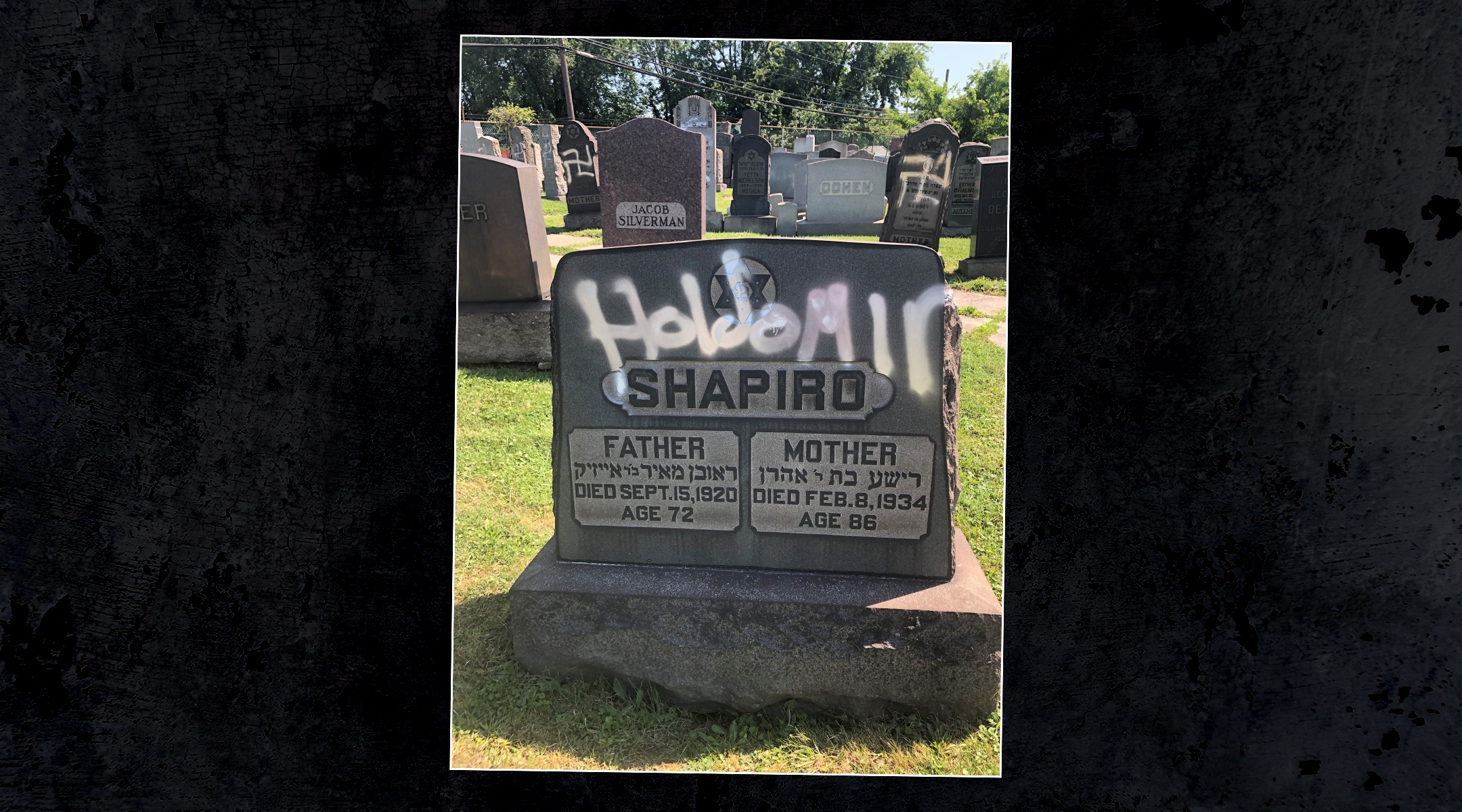 One of the defaced Jewish gravestones in Dundalk, Md., contained a misspelled reference to Holodomor, the great Ukrainian famine of the 1930s. (Courtesy of Eric L. Goldstein)

Steven Venick, board president of the Jewish Cemetery Association of Greater Baltimore, said he was “disheartened” when he learned of the vandalism, and that once he was alerted to it, he had a caretaker clean all 13 of the desecrated graves on Monday morning.

Venick said he also filed a police report on the incident and would temporarily be locking the gates to the cemetery. The association is also exploring an on-demand locking system for the gates that would only allow “permitted people” inside the cemetery grounds.

“I have been looking after cemeteries for nearly 22 years… and do not recall any acts like this,” said Venick. “I have no idea who would have done something like this and truly hope this is an isolated incident. Cemeteries are sacred places where our loved ones are buried, and our goal is always to have them maintained to the best of our ability.”

The identity of the vandals remains unknown at present, Howard Libit, executive director of the Baltimore Jewish Council, said.

“Whatever it is, it’s an act of antisemitism,” Libit said. “It’s a despicable act of hate that cannot be tolerated. We have to all stand together against hate. We have a community that generally respects each other, and fortunately this kind of thing is rare. Hopefully, we’ll continue to educate people. This is just not acceptable.”

Other Jewish cemeteries have been vandalized in recent months, including the desecration of Jewish graves in Grand Rapids, Michigan, just prior to the 2020 election and Jewish headstones smashed in Romania and Ukraine earlier this year.

A version of this story originally appeared at Jmore – Baltimore Jewish Living. Jmore Editor-in-Chief Alan Feiler contributed to this report.