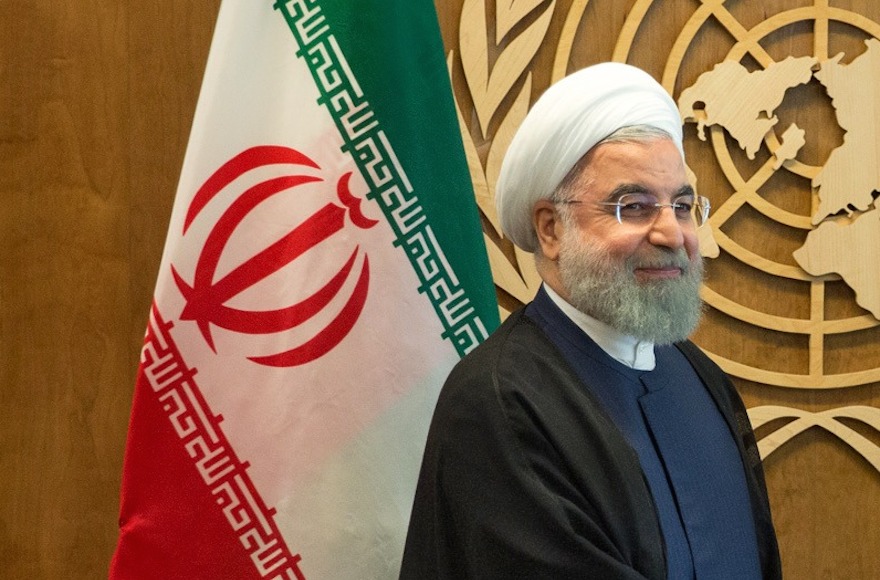 (JTA) — Iran said it will partially withdraw from the 2015 nuclear deal that the United States unilaterally pulled out of one year ago.

President Hassan Rouhani said in a televised speech Wednesday– the anniversary of the U.S. withdrawal from the nuclear deal between the world powers and Iran trading sanctions relief for a rollback in Iran’s nuclear program — that the Islamic Republic will keep its excess enriched uranium and heavy water rather than limit its stockpile by selling it to other countries.

Rouhani also set a 60-day deadline for the powers to set new terms for the nuclear deal, including easing restrictions on Iran’s banking and oil sectors. If the world powers fail to meet the deadline, Iran has threatened to remove caps on uranium enrichment levels and resume work on its Arak nuclear facility.

Iran sent letters Wednesday to the leaders of Britain, China, the European Union, France and Germany, signatories to the nuclear deal, announcing the decisions. The letter also was to be sent to Russia.

“If the five countries join negotiations and help Iran to reach its benefits in the field of oil and banking, Iran will return to its commitments according to the nuclear deal,” Rouhani said.

“We felt that the nuclear deal needs a surgery and the painkiller pills of the last year have been ineffective. This surgery is for saving the deal, not destroying it.”

Secretary of State Mike Pompeo said the United States will wait to see if Iran follows through on threats to limit its compliance with the deal before deciding how to react, The Associated Press reported.

Israeli Prime Minister Benjamin Netanyahu, who vehemently opposed the agreement, said in reaction, “We will not allow Iran to acquire a nuclear weapon.” Netanyahu was speaking at an official ceremony to mark the annual Memorial Day held at the Mount Herzl military cemetery in Jerusalem.

The nuclear watchdog for the United Nations has said that Iran is continuing to comply with the terms of the deal.