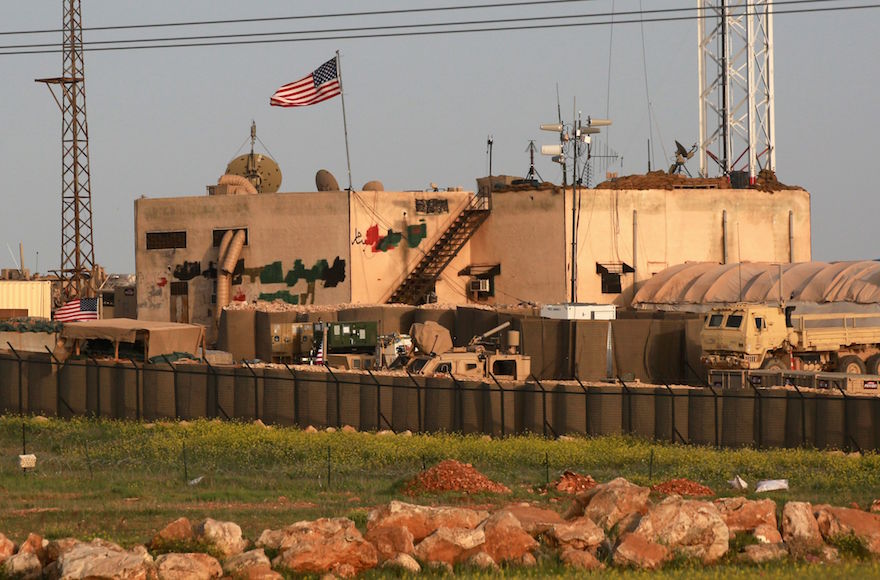 (JTA) — President Donald Trump defended his decision to pull out of Syria by saying Israel is able to defend itself thanks to aid from the United States.

His comments follow quiet criticism from Israel and public disapproval from some major Jewish groups that the pullout of troops will leave a vacuum in Syria that will be filled by Israel’s bitter enemy, Iran.

“I spoke with Prime Minister Benjamin Netanyahu. I told Bibi, you know we give Israel $4.5 billion a year. And they are doing very well at defending themselves,” Trump told reporters Wednesday after a surprise visit to U.S. troops in Iraq.

“I’m the one that moved the embassy to Jerusalem. I was the one who was willing to do that. So that’s the way it is  — we are going to take great care of Israel. Israel is going to be good. We give Israel 4.5 billion a year. And we give frankly a lot more than that if you look at the books. They’ve been doing a good job,” he also said.

Trump launched a full and accelerated pullout of the 2,000 U.S. troops in Syria last week, confirming the news in a tweet in which he wrote: “We have defeated ISIS in Syria, my only reason for being there during the Trump Presidency.”

The pullout leaves an opportunity for Iran to exert more influence over a Syrian regime locked in a civil war, and to take up a position on Israel’s northern border.

Last week the American Israel Public Affairs Committee, the influential pro-Israel lobby, retweeted a series of comments by lawmakers deeply critical of Trump’s pullout announcement. AIPAC said in a statement that “Iran must not be allowed to have a permanent military presence in Syria.”