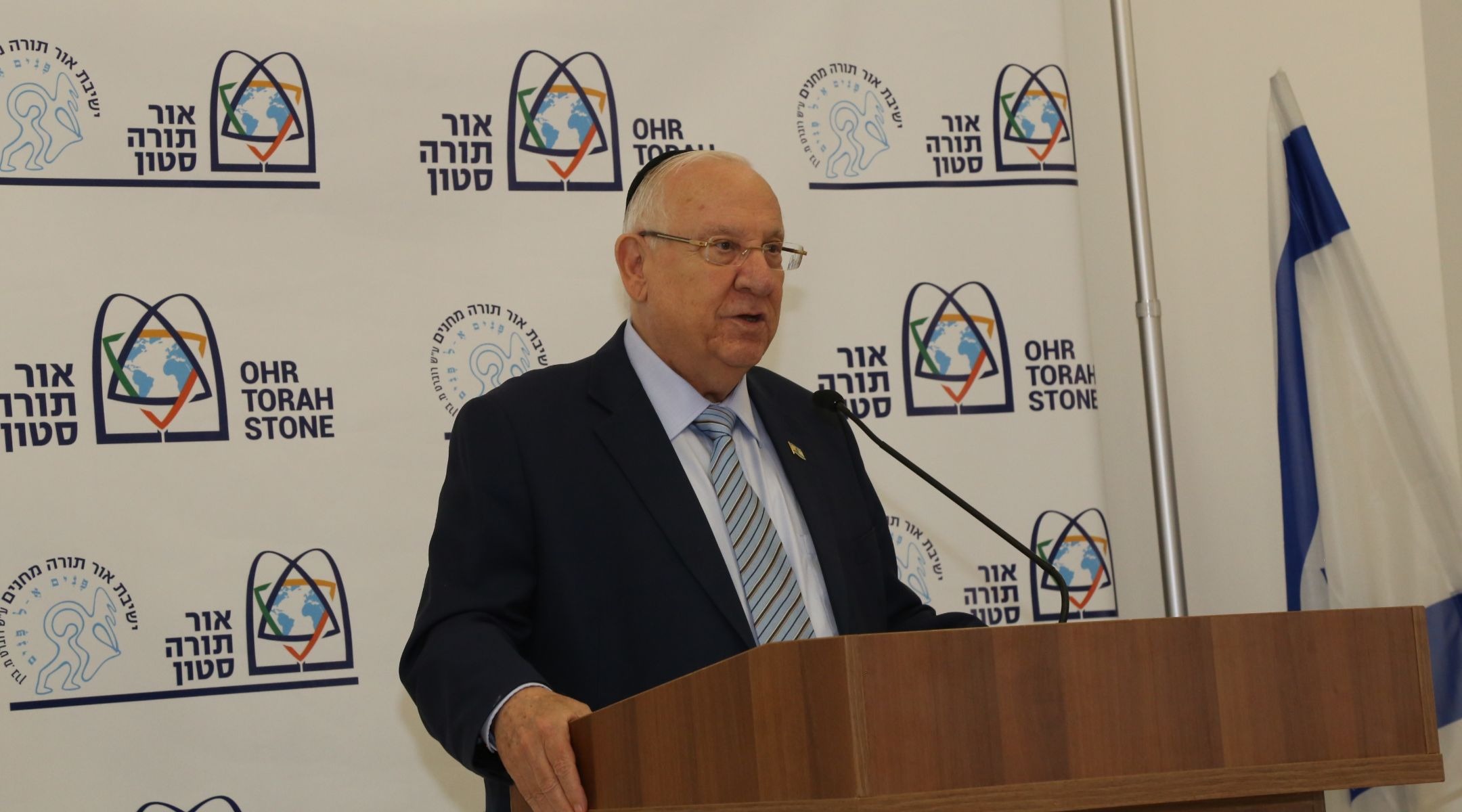 Israeli President Reuven Rivlin, seen in September 2019, said the "name-calling, the ridiculing and the contempt must stop" in the annexation debate. (Gershon Ellinson)
Advertisement

JERUSALEM (JTA) — Israeli President Reuven Rivlin said that arguments about annexation should take place but called for an end to “verbal violence.”

Rivlin released a statement, including a Hebrew-language video, on Thursday as the rhetoric surrounding Prime Minister Benjamin Netanyahu’s decision to unilaterally annex parts of the West Bank next month continues to rise to a fever pitch.

“Discussing fateful questions — and the question of annexation is indeed a fateful one — must take place,” Rivlin said.

“We do not flinch at the critics or the questioners, but we must beware of those who silence the conversation. We must not prevent questions, doubts or criticism from any political side. Disagree — yes. Argue — absolutely. But the verbal violence, the name-calling, the ridiculing and the contempt must stop. I, who remember well the attempts to silence the critics at the time of Oslo and the disengagement and remember how hard we worked to recover from that shutdown, make this request of you – enough.”

On Thursday, Jordan Valley Regional Council head David Elhyani, a leader of the settlers who are against the Trump peace plan, which provides for the annexation alongside the resumption of peace talks with the Palestinians, compared the plan to being forced to eat cake at gunpoint.

“If someone comes to me with a cake while holding a gun to my head, will I just take some cake and then say goodbye?” he said in an interview with Army Radio. “My duty is to save us from the existential threats.”

Several other settler leaders have called for his resignation as the head of the strategic region.

The leader of the left-wing Meretz party, Nitzan Horowitz, during a tour of the Jordan Valley called a map for the Trump peace plan “an apartheid map. It reminds me of South Africa.”

Avigdor Liberman, head of the opposition Yisrael Beiteinu party, who lives in a West Bank settlement, told The New York Times on Thursday that Netanyahu should have annexed the Jordan Valley 14 months ago when he first had a window and accused the prime minister of using the issue now to deflect from his legal troubles. Netanyahu is on trial for corruption charges.

Also Thursday, Israel Police told organizers of a planned march in Tel Aviv against annexation that they have denied permission to hold the event set to end at Rabin Square, expected to bring about 10,000 people, citing restrictions due to the coronavirus, though other protests have been held under the regulations, Haaretz reported.

The Supreme Court has upheld allowing demonstrations as long as proper social distancing is practiced.