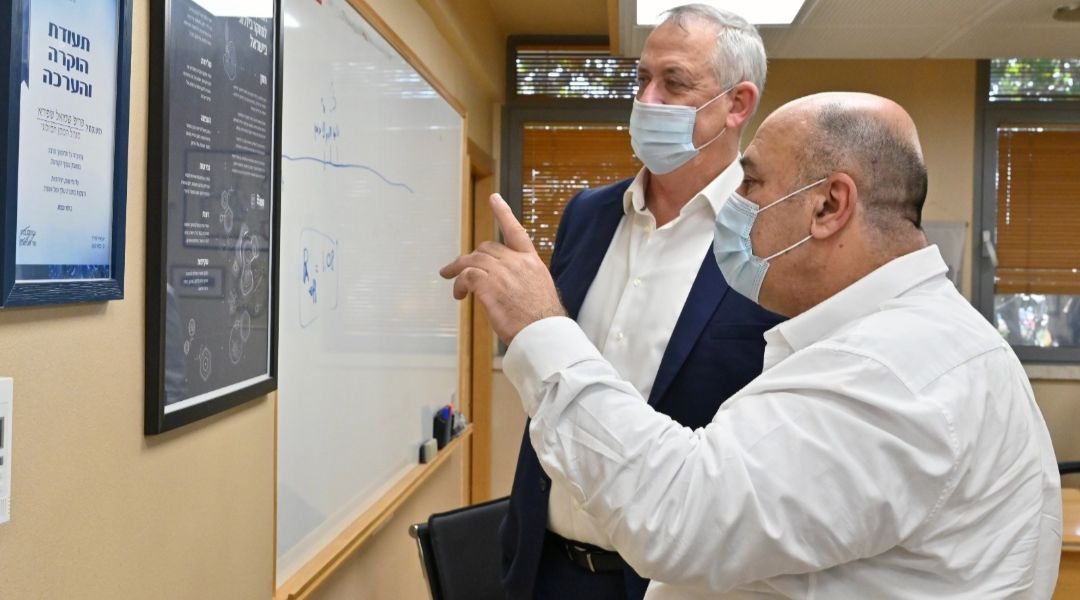 Defense Minister Benny Gantz, with jacket, is briefed on the progress of the development of a vaccine against coronavirus at the Israel Institute for Biological Research by its director general, Shmuel Shapira. (Ariel Hermoni/Defense Ministry)
Advertisement

JERUSALEM (JTA) — An Israeli national research institute will begin human trials of a coronavirus vaccine after the High Holiday season ends in October.

Israeli Defense Minister Benny Gantz made the announcement Thursday after visiting the Defense Ministry’s Institute for Biological Research in central Israel, about 13 miles from Tel Aviv.

The vaccine has already been tested successfully on animals.

The human trials will be undertaken “in coordination with the Ministry of Health and in line with medical safety protocol,” Gantz said in a statement following his visit to the institute.

In June, Israel signed a deal with the American biotech company Moderna for a potential COVID-19 vaccine.

Also Thursday, Israel’s so-called coronavirus czar, Ronni Gamzu, told reporters that Israel has the highest per-capita morbidity rate in the world, though it is not clear if he was referring to the number of Israel’s cases overall or over the past several weeks, when the number of new cases per day has skyrocketed.

Gamzu criticized a wedding held the day before in Jerusalem in the Belz Hasidic community in which thousands of people participated, calling it a kind of Russian roulette.

“What we saw at the wedding yesterday is the potential for mass infection,” he said. “It drives me crazy; it makes me angry.”