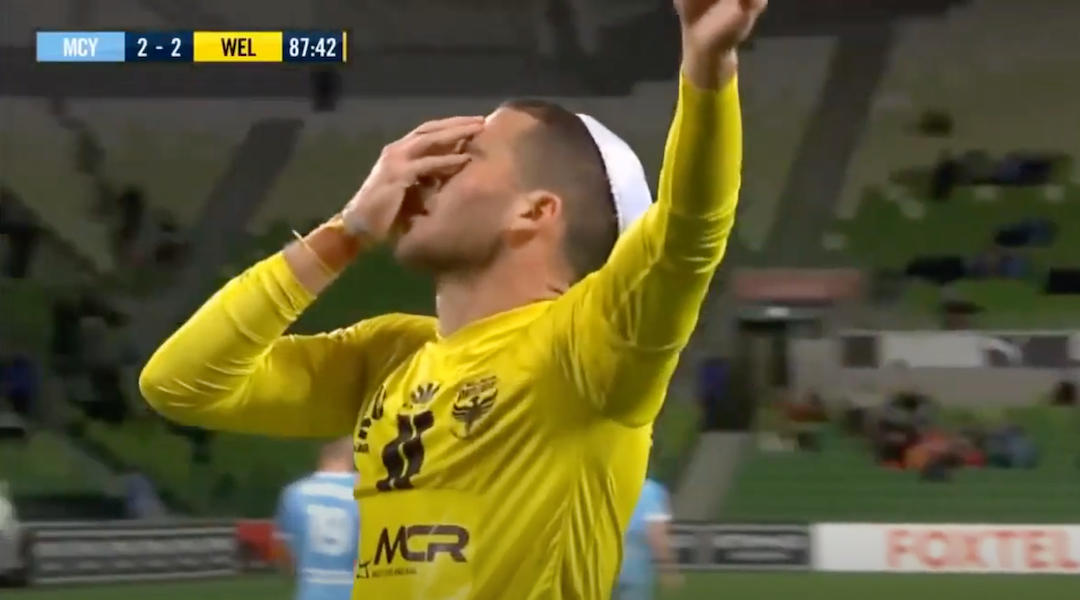 Tomer Hemed celebrates a goal with a kippah. (Screenshot from YouTube)
Advertisement

(JTA) — Israeli soccer player Tomer Hemed scored two goals for his New Zealand club Wellington Phoenix in a crucial match on Sunday and celebrated in Jewish style: with an Israeli flag and a kippah.

Following his first goal on a penalty kick against Melbourne City, a rival team in Australia’s top soccer league, Hemed ran past the goal to fans in the front row who were wearing and waving Israeli flags. They gave one to Hemed, who draped it over his head as his teammates rushed to celebrate with him.

Late in the match, Hemed tied the score on a spectacular sliding kick, then donned a kippah he had tucked into his jersey. He looked to the sky and began reciting the Shema prayer before again rejoicing with the Jewish fans.

The display earned him a yellow card penalty because the league prohibits facial or head coverings of any kind.

“I said after, and you can see on my social media, when I support my country I hope for peace. I want peace and for people to return to normal life,” Hemed told the New Zealand site Stuff. “My parents, my family, everyone in the family has had a tough year because of COVID, my parents couldn’t go out of their home for a year and when they think their life is back to normal, they cannot go out and my heart is with them.”

After the match, Wellington Phoenix banned fans from bringing any flags except those of New Zealand and Australia to upcoming games because of the heightened tensions around the Israel-Gaza conflict. Despite the statement, the team stood up for Hemed’s move.

“I know for a fact that when he does that celebration, he’s praying for peace,” Phoenix General Manager David Dome said. “He’s proud of his country, and as an Israeli abroad he’s trying to express solidarity with his country, but I also think we have to look at the flipside of it as well and there’s a very real human tragedy that’s going on in that part of the world and we have to be sensitive to both sides.”

Hemed’s goals salvaged the match, leaving it a tie, and gave Wellington a chance to finish in the league’s top tier. The 34-year-old, who has played for Israel’s national team, has seven goals this season for the Phoenix.