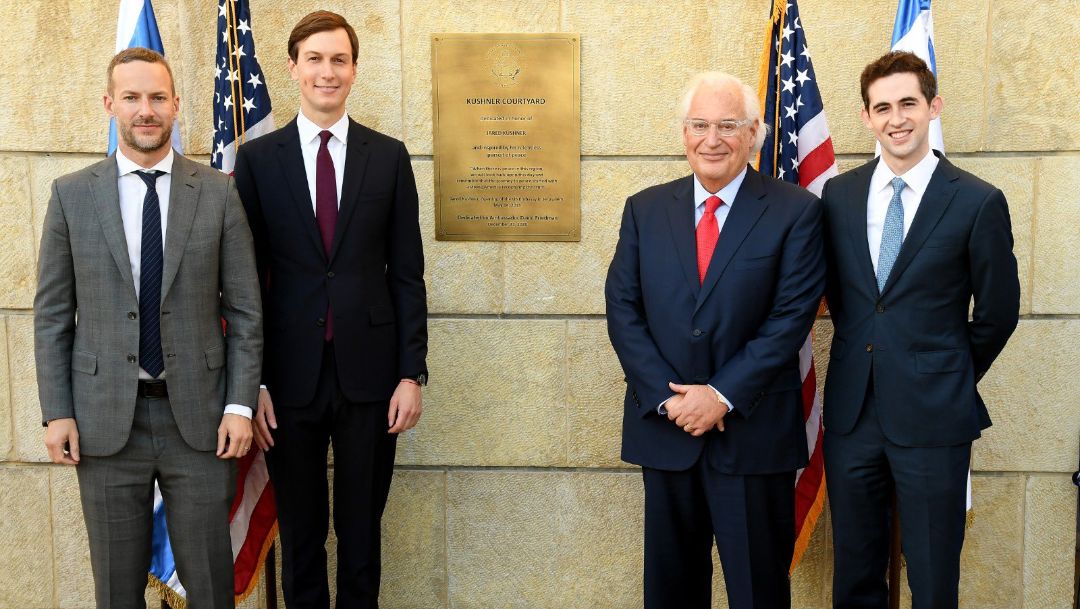 (JTA) — Jared Kushner is getting some parting gifts in Jerusalem weeks before his father-in-law’s presidency ends.

David Friedman, the U.S. ambassador to Jerusalem, on Monday named a courtyard to the embassy after Kushner, a senior White House adviser to President Donald Trump who is in Israel for meetings with Prime Minister Benjamin Netanyahu. The plaque includes Kushner’s quote from the embassy dedication on May 14, 2018.

“When there is peace in this region we will look back upon this day and remember that the journey for peace started with a strong America recognizing the truth,” Kushner said at the time.

Trump broke with decades of U.S. policy when he recognized Jerusalem as Israel’s capital and ordered the embassy move from Tel Aviv.

Kushner heads from Israel to Morocco to bring to fruition the third normalization agreement between Israel and Arab countries under the Abraham Accords launched this year by Trump. Bahrain and the United Arab Emirates have already formalized agreements, and Sudan and Israel are close to a pact.

Kushner is hastening to solidify the deals before Trump leaves office and Joe Biden, who was elected in November, assumes the presidency. Biden has said he will honor the agreements.

Separately, Netanyahu on Monday dedicated 18 trees in Kushner’s honor at the Grove of Nations in the Jerusalem Forest.

“You have left through the Abraham Accords a mark on our region Jared,” Netanyahu said. “I don’t think it’s a passing mark. I don’t think the seasonal rains will wash it away. I think it’s here to stay. It’s a great thing and something that we truly treasure.”

The Grove of Nations is a section of the forest administered by the Jewish National Fund that honors foreign leaders.