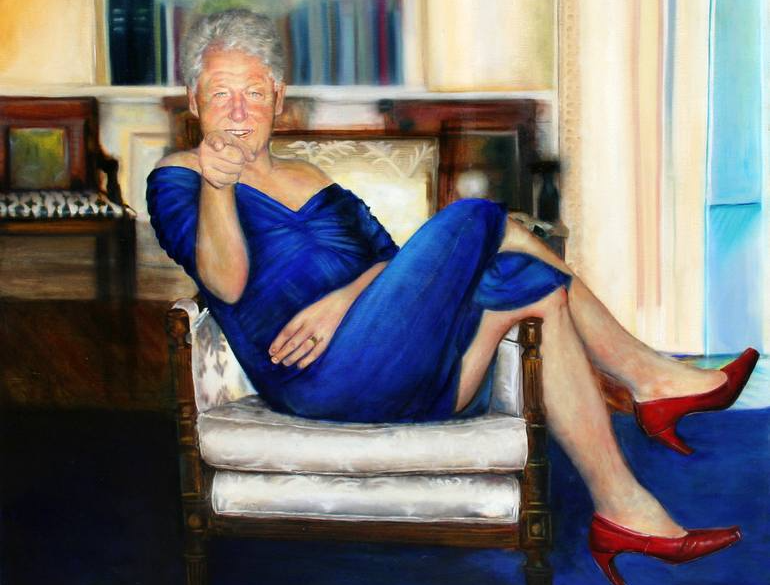 The Daily Mail reported Wednesday that the painting featured the former American leader lounging in a blue dress in the Oval Office. A blue dress played a prominent role in Clinton’s own sex scandal — his affair with White House intern Monica Lewinsky. The painting was identified as “Parsing Bill” by artist Petrina Ryan-Kleid.

Epstein, a Jewish financier, hanged himself in a New York jail over the weekend while awaiting trial on sex trafficking charges.

Clinton and Epstein had numerous contacts over the years, with the former president even riding on Epstein’s private plane on more than one occasion.

Epstein’s death has fueled conspiracy theories, one of which appeared to be shared by President Donald Trump. On Sunday, Trump retweeted a Twitter post claiming that Epstein “had information on Bill Clinton & now he’s dead.”

According to The Washington Post, an autopsy showed that the 66-year-old Epstein had broken bones in his neck, including one commonly found broken in cases of strangulation. However, this is not necessarily an indication of foul play, given that older people who hang themselves sometimes break that bone.

Following his death, it emerged that guards at the Manhattan jail had failed to check Epstein’s cell every 30 minutes per procedure. In addition, the jail had transferred his cellmate and allowed Epstein to be housed alone just two weeks after he had been taken off suicide watch, a violation of regular procedure.