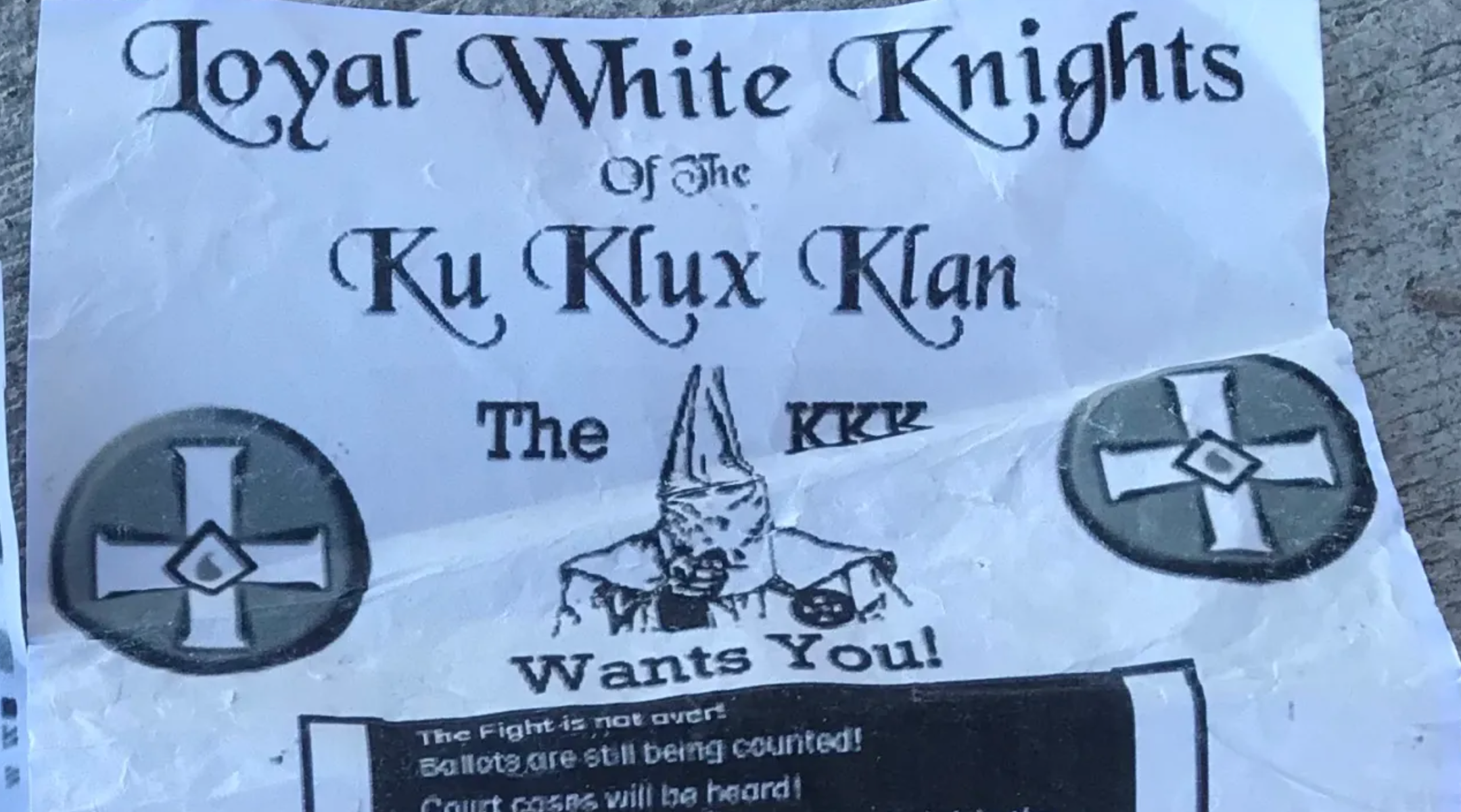 (J. the Jewish News of Northern California via JTA) — Recruitment flyers for the Ku Klux Klan that also espoused false claims made by President Donald Trump alleging fraud in November’s election were found outside more than a dozen homes and businesses in a small Northern California town.

The flyers, which were discovered over the weekend in Tulelake, advertised the Loyal White Knights sect of the hate group. They were weighted down in rice-filled Ziploc bags and tossed into front yards, Police Chief Tony Ross said.

“This is the second time that it’s occurred since I’ve been chief,” Ross said Wednesday. “The last time was about 10 years ago. They threw 20, 25 of ’em into different yards in town.”

The Loyal White Knights, a virulently racist and anti-Semitic group based in North Carolina, is “perhaps the most active Klan group in the United States,” according to to a 2016 report from the Anti-Defamation League’s Center on Extremism titled “Tattered Robes.”

The flyers, first reported by the local newspaper, the Herald and News, said “The KKK Wants You!” with a picture of a hooded klansman pointing a la Uncle Sam. They advertised a weekly call-in talk show and the web address for the Loyal White Knights.

“The radical Left,” the flyers read, “is giving Your hard earned money To countries and programs That are benefiting their Communist agenda instead Of Helping the American people Keep a roof over their heads.”

Referring to the voting in November, the flyers said that “The Democrats pulled every foul trick in the book to steal this election from Trump! The Fight is not over! Ballots are still being counted!”

Tulelake has been heavily populated by military families since the 1940s.

“We’re a community of veterans,” Mayor Henry Ebinger told the Herald and News. “Those were certainly not the ideals they fought, and sometimes died for, to preserve in our great nation.”

In a tweet, the ADL’s Central Pacific regional office in San Francisco lauded Ebinger “for rejecting the expression of hate” and commended Ross for investigating.

“The promotion of KKK bigotry in Tulelake is disturbing and offensive,” the ADL said.

KKK membership has waned significantly in recent years, according to the 2016 ADL report, which said there were “approximately 3,000 Klan members nationwide.”