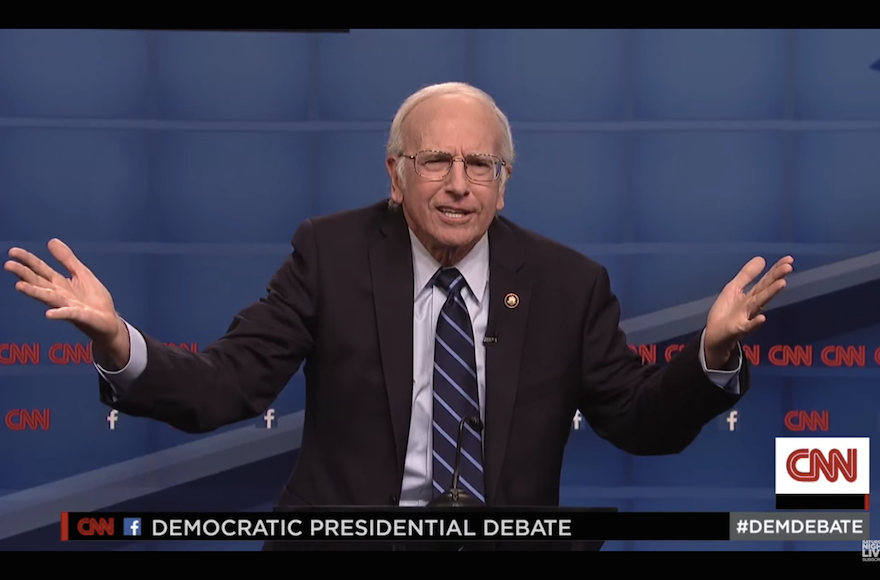 (JTA) — Larry David, the Bernie Sanders doppelganger who often portrays the presidential candidate in skits on “Saturday Night Live,” says the senator from Vermont should drop out of the race for the Democratic nomination for president and throw his support behind Joe Biden.

“I feel he should drop out,” David told The New York Times in an interview published Saturday. “Because he’s too far behind. He can’t get the nomination. And I think, you know, it’s no time to fool around here. Everybody’s got to support Biden.”

He said in the far-ranging interview with Times columnist Maureen Dowd that he is relieved not to be flying back and forth to New York on weekends to do his Sanders imitation for “SNL.”

“Imagine if he had become president, what would have happened to my life?” said David, who is holed up at his Los Angeles home amid the coronavirus pandemic.

In a public service announcement for the state of California last week, David called on “the idiots out there” to stay home and watch TV in an effort to curb the spread of the disease.

David told Dowd that he is just fine with social distancing and hunkering down in his home. “I will say that the lack of invitations, OK, that’s been fantastic,” he said. “Yeah, that I love. You don’t have to make up any excuses.”

He said he is watching “Ozark” and “Unorthodox” on Netflix and reading Woody Allen’s controversial memoir, which was released last month after its original publisher dropped it.

Sanders — who is David’s distant cousin — has said he will remain in the race despite being about 300 pledged delegates behind Biden, while several states have postponed their primaries to June as they work to halt the spread of the coronavirus.