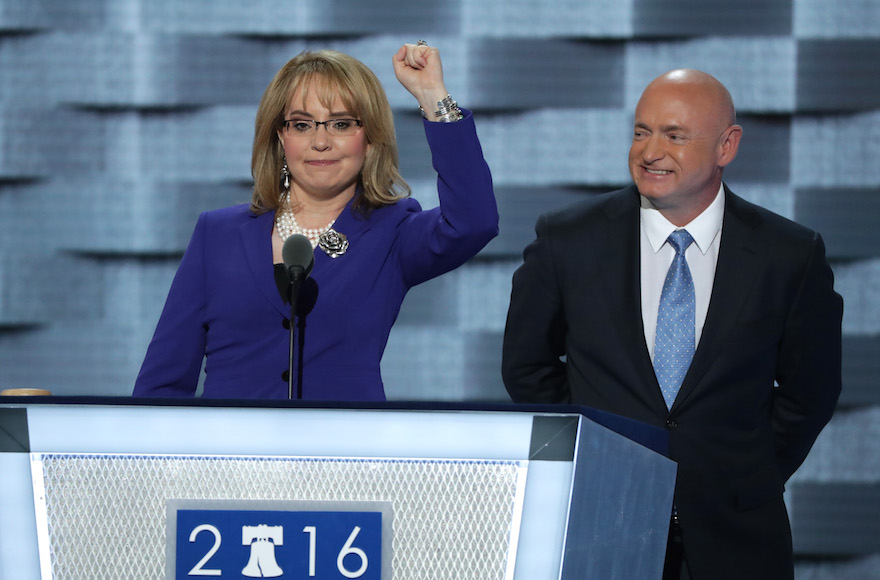 Gabby Giffords waving to the crowd as her husband, retired NASA Astronaut and Navy Captain Mark Kelly, looks on after speaking on the third day of the Democratic National Convention at the Wells Fargo Center in Philadelphia, July 27, 2016. (Alex Wong/Getty Images)
Advertisement

(JTA) — Mark Kelly, a retired astronaut and the husband of former U.S. Rep. Gabrielle Giffords, said he will run for the U.S. Senate seat in Arizona vacated by the death of John McCain.

Kelly is reported to be the top Democrat in the 2020 run against former U.S. Rep. Martha McSally, a Republican who was appointed to fill the seat in the wake of McCain’s passing.

Kelly has been active as a gun-control advocate since his wife was shot in the head and seriously injured while meeting with constituents outside a Tucson supermarket. Six people died and 13 were injured in the January 2011 attack.

Giffords, who resigned her seat a year later after serving as a lawmaker for five years, figures prominently in a four-minute Kelly campaign video released on Tuesday titled “My next mission.”

The race would be a match between veterans: Kelly from the Navy and McSally, a former Air Force fighter pilot.

The Senate seat will come up for election to a full term in 2022.