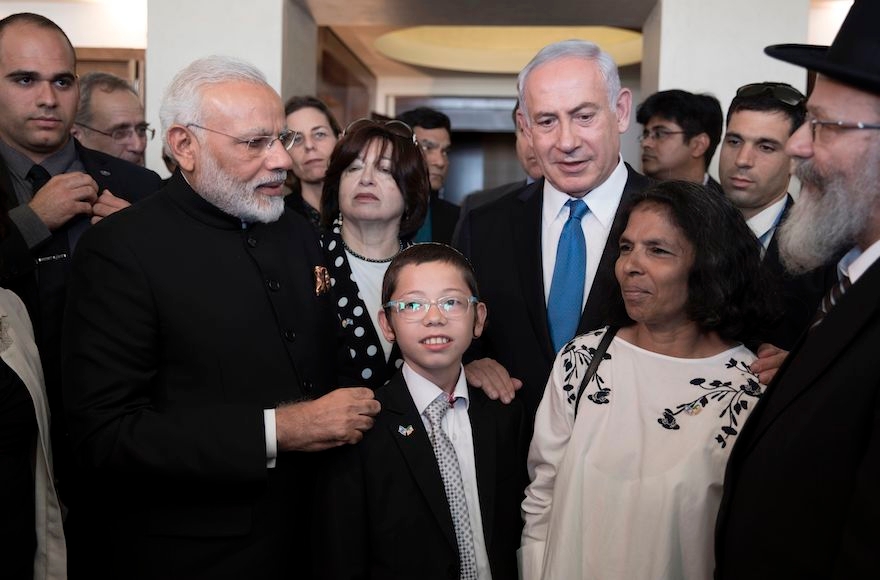 Indian Prime Minister Narendra Modi, left, and Israeli Prime Minister Benjamin Netanyahu, in the blue tie, meet with Moshe Holtzberg and his nanny Sandra at an event at the Nariman Chabad House in Mumbai, the site of the 2008 shooting that killed Holtzberg's parents, July 5, 2017. (Atef Safadi/AFP/Getty Images)
Advertisement

(JTA) — Moshe Holtzberg, whose parents were killed in the 2008 terrorist attack in Mumbai when he was 2, was called to the Torah as a bar mitzvah.

Holtzberg celebrated on Saturday in his hometown of Afula, in northern Israel, Chabad.org reported. A party was held on Sunday night in Kfar Chabad.

“As you make this important transition and cross a significant landmark in the journey of your life, the courage of [nanny] Sandra and prayers of the people of India will continue to bless you for a long, healthy and successful life,”  Indian Prime Minister Narendra Modi wrote in a letter to Moshe, COLLive reported. “Your story continues to inspire everyone. It is one of miracle and hope overcoming tragedy and immeasurable loss.”

“We know that there is life amidst this tragedy. There is revival and there is hope,” he wrote. “You come now with the love of the entire Jewish people, all citizens of Israel and very many outside Israel.”

Moshe’s parents, Rabbi Gabi and Rivky Holtzberg, were the directors of the Nariman Chabad House when it was attacked on Nov. 26, 2008. Four other Israeli and American visitors to the house also were killed.

The Chabad House was among 12 targeted locations in coordinated attacks by Lashkar-e-Taiba, an Islamic terrorist organization based in Pakistan.

The child was dubbed “Baby Moshe” when a photo of his terrified-looking nanny running from the besieged Chabad House clutching the little boy was splashed on the front pages of newspapers around the world.

In January, 2018, Moshe returned to Mumbai, accompanying Netanyahu on a state visit.

In September, Moshe celebrated the ceremony of Hanachat Tefilin, or putting on the tefillin for the first time, during a ceremony in Stony Point, New York, and visited the grave of the Lubavitcher Rebbe, Rabbi Menachem Mendel Schneerson.