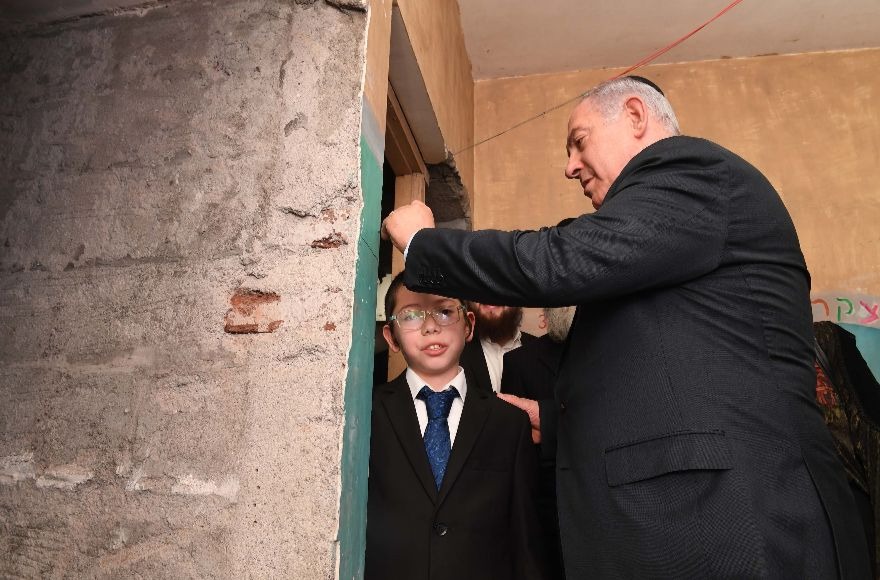 (JTA) — Moshe Holtzberg, who lost both his parents in a 2008 terror attack at the Chabad House in Mumbai, visited his old room accompanied by the Indian nanny who saved his life and by Israel’s prime minister, Benjamin Netanyahu.

Moshe, 11, known even now in the Indian media as “Baby Moshe,” found the marks on his wall where his mother had measured his height as a toddler. Netanyahu marked his present height on the same wall during their visit on Thursday.

It is the first time that Moshe, who lives in Israel with his grandparents, has returned to the building since being spirited away by his nanny during the attack.

In July, Indian Prime Minister Narendra Modi visited Israel to mark 25 years of diplomatic relations between the two countries; it was the first visit to Israel by an Indian head of government. During the visit, Modi met with Moshe, who said he missed India. Modi invited the boy to return at any time. Netanyahu offered to bring Moshe with him on his next trip to India.

Sandra Samuel, the Indian nanny who ran out of the Chabad House carrying 3-year-old Moshe, accompanied him to Israel, remaining with him out of loyalty and love. She also returned with him on his visit to India.

The Chabad House attack was one of several carried out in Mumbai over four days in November 2008 by a Pakistani Islamist group that left 166 dead — including Moshe’s parents, Rabbi Gavriel and Rivkah Holtzberg — and hundreds injured. In addition to the Holtzbergs, four other Jewish visitors to the Chabad House were killed in the attack.

Natives of Israel, the Holtzbergs moved to Mumbai in 2002, where they opened the city’s first Chabad House, a synagogue and community center for Jewish residents and tourists.

During Thursday’s event, Moshe and Netanyahu unveiled a plaque in memory of the attack. The top floors remain in the same condition as they were after the attack, with bullet holes marking the walls, as part of a memorial and education center that Chabad calls a “living memorial” to the Holtzbergs and the other victims.

Following the unveiling of the plaque and museum, Moshe spoke to the guests and reporters gathered in the building. He thanked Netanyahu for inviting him to India and invited Netanyahu to return with him in two years to celebrate his bar mitzvah.

“My heart beats, my heart is moved, to return to my parents’ home, the Chabad House that has been rebuilt and refurbished,” the boy said. “Here I was born, and here I spent two years. I have absorbed my beloved parents’ sense of mission, to leave the Promised Land on behalf of the rebbe. From the lowest of places. The house that is open to everyone, to Jews from around the world, who sought a warm corner. My beloved parents did what they did here for the Land of Israel.”

Netanyahu said to Moshe: “The Jewish people have been with you throughout and there is a good reason for this. What happened here expressed many things. It expressed hatred of Israel and love of Israel. Your dear parents’ love of Israel, that of the Chabad emissaries here and around the world, which embraces every Jew and has a home for every Jew everywhere, including here in the heart of Mumbai.”

Following the event, Netanyahu met with leaders of the local Jewish community. The visit to Mumbai was the last stop on the prime minister’s five-day visit to India. 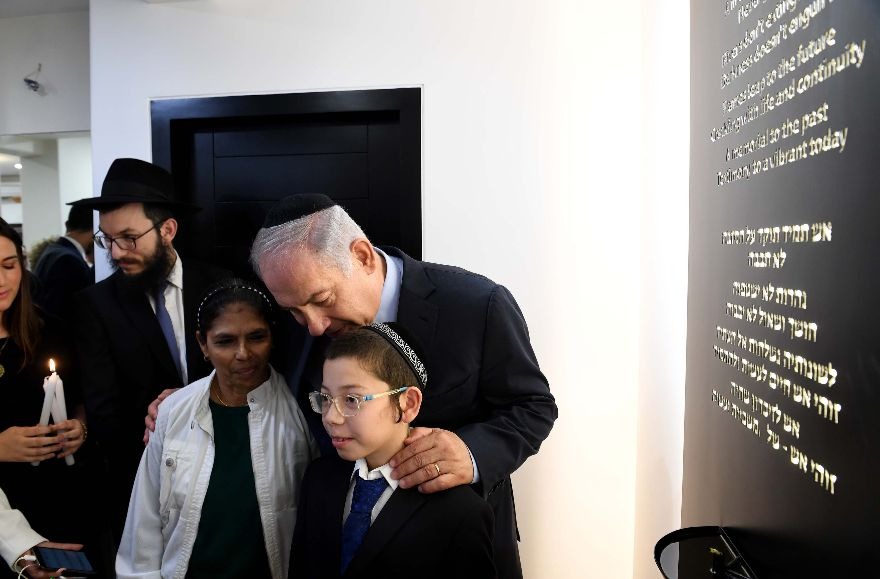