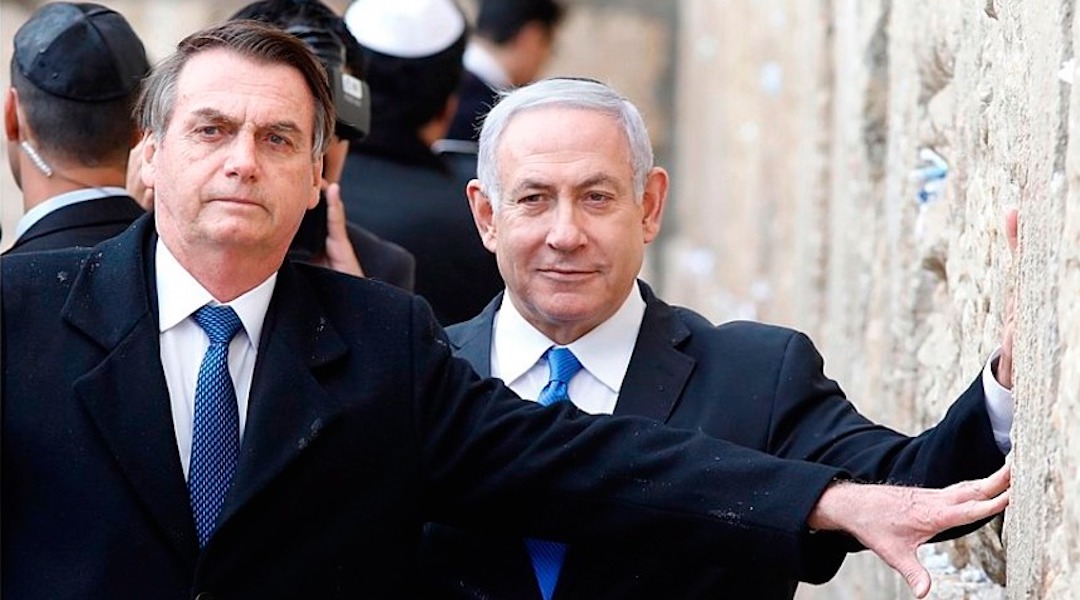 JERUSALEM (JTA) — Brazil’s president visited the Western Wall on Monday escorted by Israel’s prime minister in what may be seen as tacit recognition of the Israeli sovereignty over that part of Jerusalem’s Old City.

“We are here in this sacred place, where my soul feels deeply moved by the faith,” Jair Bolsonaro said. “This is the base of everything if we want to think about peace to our peoples.”

The ardently pro-Israel Christian leader and right-wing populist, whose four-day visit to the Jewish state began Sunday, became the first head of state to tour the most sacred place of Judaism at the side of an Israeli prime minister. Protocol usually dictates that visits by heads of state to the site in the Old City are treated as private affairs. In 2017, for example, President Donald Trump treated his visit to the site as a private one.

Less than two weeks before Israel’s elections, Netanyahu was eager to be seen in the company of a world leader who has said he is prepared to move his embassy to Jerusalem.

On Sunday, the Israeli prime minister greeted Bolsonaro as he stepped off his airplane, which was seen as a special deference. He also made room on his agenda to be with the Brazilian president at six events.

Bolsonaro opened his first speech by saying “Ani ohev et Israel,” Hebrew for “I love Israel.” He signed six bilateral agreements and announced a new Brazilian “business office” to be opened in Jerusalem.

“I hope that is a first step toward the opening, in time, of the Brazilian Embassy in Jerusalem,” Netanyahu declared in reference to Bolsonaro’s campaign pledge to transfer the embassy.