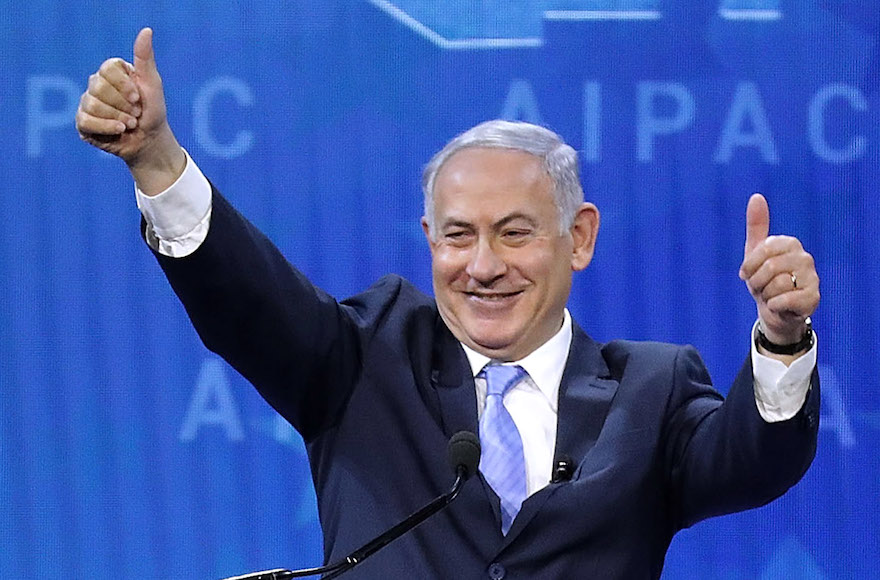 (JTA) — After slamming Benjamin Netanyahu over shepherding the merger of a right-wing party and a farther-right wing party that subscribes to anti-Arab racist views, AIPAC confirmed that the Israeli prime minister will “speak live” at the pro-Israel lobby’s annual policy conference.

The announcement tweeted on Saturday night indicates that Netanyahu will appear at the conference in Washington D.C. in person as opposed to via satellite.

The conference comes two weeks before national elections in Israel, in which Netanyahu is facing a serious challenge from the Center-Left bloc. Benny Gantz, Yair Lapid, and Moshe Ya’alon of the combined Blue and White Party reportedly have been invited to speak to the conference, but it is not known if they will.

AIPAC on Friday tweeted agreement with a statement released by the American Jewish Committee, which read, in part: “The views of Otzma Yehudit are reprehensible. They do not reflect the core values that are the very foundation of the State of Israel.”

“Historically, the views of extremist parties, reflecting the extreme left or the extreme right, have been firmly rejected by mainstream parties, even if the electoral process of Israel’s robust democracy has enabled their presence, however small, in the Knesset,” the AJC statement also said.

“We agree with AJC. AIPAC has a longstanding policy not to meet with members of this racist and reprehensible party,” AIPAC tweeted nearly a full day later.

On Thursday, eight left-leaning American Jewish organizations released a joint statement in which they called on the American Jewish community to “affirm that Kahanists have no place in the Knesset.”

We agree with AJC. AIPAC has a longstanding policy not to meet with members of this racist and reprehensible party. https://t.co/WBkCScx4U3