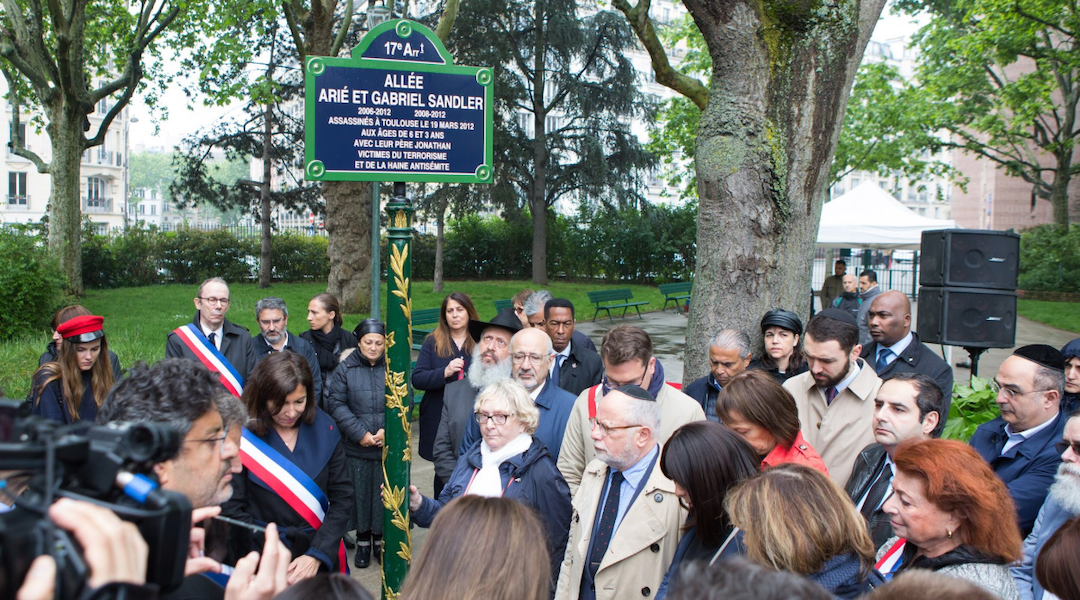 Paris Mayor Anne Hidalgo attended a ceremony honoring the victims of the 2012 Toulouse Jewish school shooting. Two alleys in the city were named after the three victims. (Anne Hidalgo/Twitter)
Advertisement

(JTA) — Two alleys that make up a city square in Paris were named for the three children killed in an attack by an Islamist gunman on a Jewish school in Toulouse.

Mohamed Merah killed a teacher, Rabbi Jonathan Sandler, and two of his children, Arie and Gabriel, ages 6 and 3, and Miriam Monsonego, 8,  in March 2012 at the Otzar Hatorah school in Toulouse.

The alleys located in Paris’ 17th arrondissement, or district, were dedicated Sunday.

Paris Mayor Anne Hidalgo and former French President Nicolas Sarkozy, who was in office at the time of the attack, attended the ceremony, as well as the deputy mayor of Toulouse, Laurence Arribage.

“The families wanted these plaques to be in a square, a place alive with laughter and swings, to pay homage to their children,” Hidalgo said at the ceremony, the Huffington Post France reported.

The street signs note that the children were “victims of anti-Semitic terror and hatred.”

Toulouse has not paid tribute to the victims of the school attack. Toulouse Mayor Jean-Luc Mouden reportedly is in favor of such a tribute, the French-language LaDepeche reported, and the Toulouse City Council is expected to debate the issue on June 14.