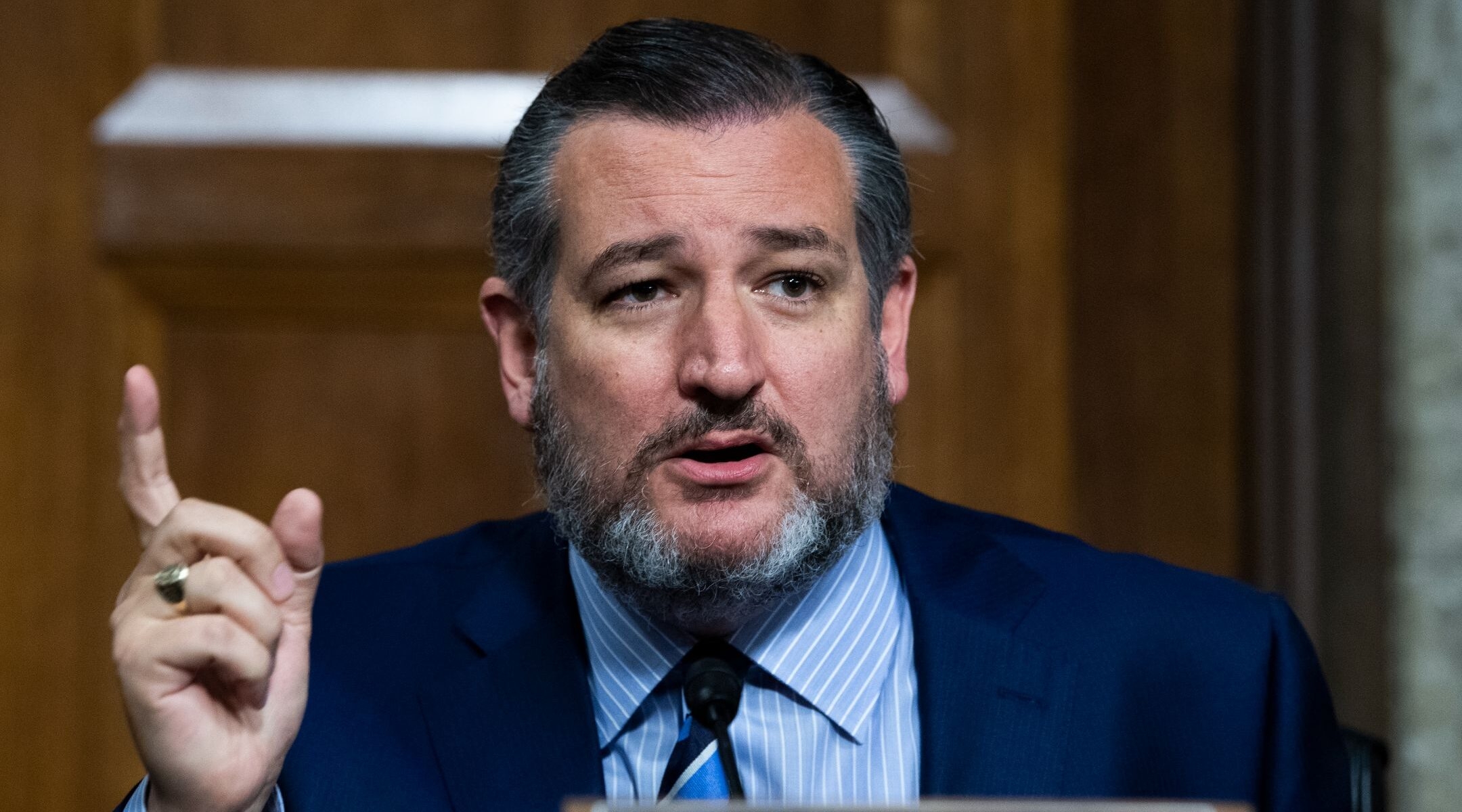 Sen. Ted Cruz said "it's not the place of American diplomats to dictate to our allies what to do with their sovereign territory." (Tom Williams/CQ-Roll Call, Inc via Getty Images)
Advertisement

(JTA) — Sen. Ted Cruz is blocking the advance of a bill that would promote normalization between Israel and Arab states because it includes language enshrining a two-state solution as the preferred U.S. outcome to the Israeli-Palestinian conflict.

Cruz is proposing amended language that does not remove a reference to a two-state outcome, but makes it clear that it should be Israel’s prerogative.

“Senator Cruz believes that America should support our allies and that it’s not the place of American diplomats to dictate to our allies what to do with their sovereign territory,” a spokesman for Cruz, a Texas Republican, told the Jewish Telegraphic Agency on Thursday. “Until recently there was bipartisan agreement in Congress mandating support for our Israeli allies in negotiations, but this bill is a radical departure that would change U.S. policy from supporting Israel to pressuring Israel. Senator Cruz opposes that change.”

Cruz is using his prerogative as a senator to impede swift passage of the bill, the Washington Free Beacon, a conservative news outlet, first reported. JTA confirmed the move.

Otherwise there is bipartisan support for the bill, which has a Republican, Rob Portman of Ohio, as a lead sponsor. The measure would mandate the U.S. government to build on the success of last year’s Abraham Accords, which normalized relations between Israel and the United Arab Emirates, Sudan, Morocco and Bahrain, and which were brokered by the Trump administration. The accords are one of the rare areas of foreign policy agreement between the Trump and Biden administrations.

Last month, the Senate Foreign Relations Committee advanced the bill to the full Senate. Cruz had backed the measure before the two-state language was added shortly before its consideration by the committee.

An official in Cruz’s office told JTA that the senator would lift the block if the sponsors would again consider his amendment to change the language. Only two other Republican senators on the committee joined Cruz in favoring the amendment.

The Cruz official told JTA that Cruz would lift his block on the bill even if the amendment were again rejected.

The official pointed to language in existing laws relating to U.S.-Israel cooperation that refers to supporting Israel in its efforts to reach a two-state solution but does not enshrine the two-state outcome as U.S. policy.

“The vast majority of American Jews and most American voters support a two-state solution,” J Street’s director of government affairs, Debra Shushan, said in a release this week. “Unfortunately for Senator Cruz, just like the status quo of occupation and injustice in Palestinian territory, this position is untenable. A majority of Democrats and Republicans in Congress recognize that a comprehensive two-state peace agreement is the only way to ensure that both the Israeli and Palestinian peoples can have freedom, self-determination and safety.”