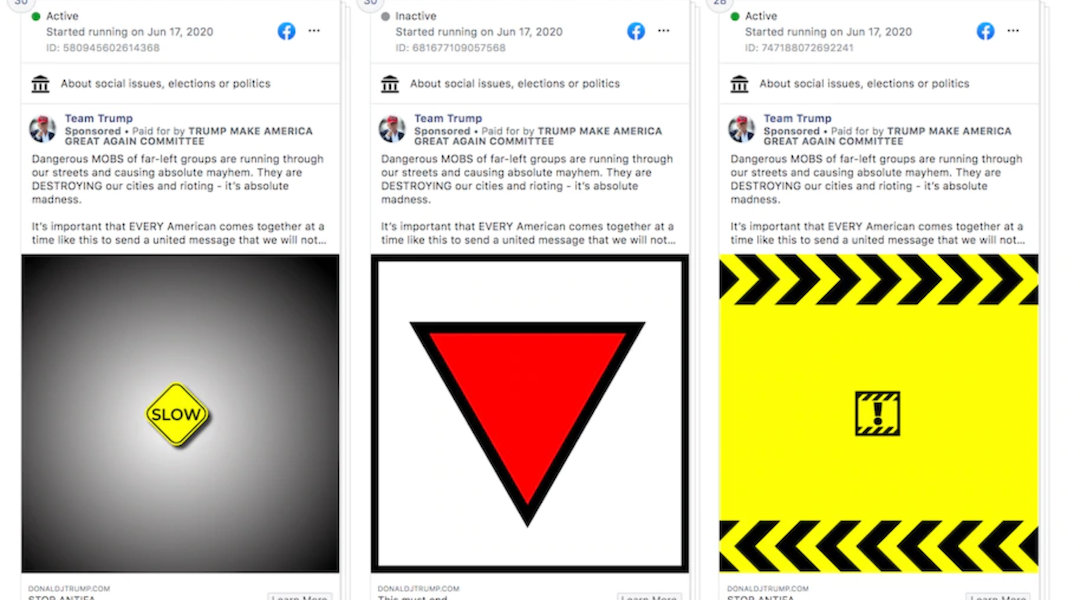 The ADL says the red triangle in a Trump campaign Facebook ad resembles a symbol used by the Nazis. (Screen shot from Facebook)
Advertisement

WASHINGTON (JTA) — President Donald Trump’s reelection campaign pushed back against claims that it knowingly used a Nazi symbol in an ad.

A series of the campaign’s Facebook ads targeting antifa, a loose coalition of local groups that confront the far right, and that Trump and his followers insist is a terrorist group, feature an upside down red triangle. Facebook removed the ad after the Anti-Defamation League said the triangle closely resembled the badge the Nazis used to identify political prisoners in concentration camps, The Washington Post reported.

The Trump War Room account, an arm of the reelection campaign, said the symbol is not in the ADL’s database of hate imagery.

An ADL spokesman told the Post that the symbol is not in their database because it does not contain “historical Nazi symbols.” Instead it tracks “symbols commonly used by modern extremists and white supremacists in the United States,” he said.

“It is not difficult for one to criticize their political opponent without using Nazi-era imagery,” ADL CEO Jonathan Greenblatt said in a statement. “We implore the Trump campaign to take greater caution and familiarize themselves with the historical context before doing so. Ignorance is not an excuse for appropriating hateful symbols.”

It’s not immediately clear from the ads why the inverted triangle, which the Nazis used to identify political prisoners in concentration camps, appears in the antifa ads. Other Trump campaign ads with identical text use yellow and back symbols similar to traffic signs that warn drivers to slow down or stop, the Post reported. The ad text warns that “dangerous MOBS of far-left groups are running through our streets and causing absolute mayhem.”

The Trump War Room account tweeted that Antifa used the red triangle first and provided a link to an example of an antifa poster with the symbol.