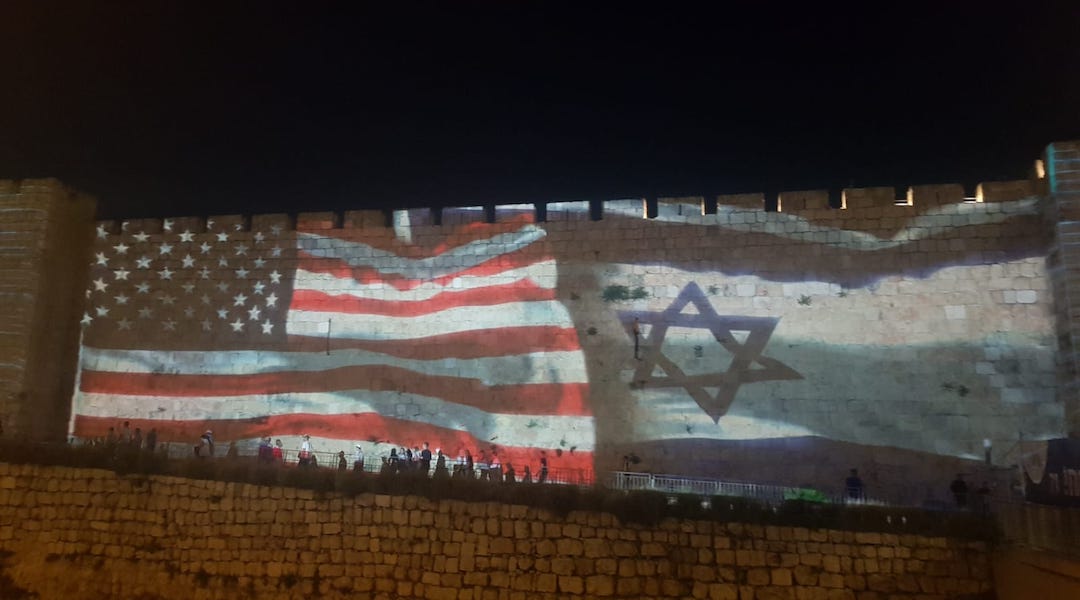 The Jerusalem municipality marks the anniversary of the U.S. Embassy move date by projecting Israeli and American flags onto the walls of the Old City, May 14, 2019. (Jerusalem Municipality)
Advertisement

(JTA) — One year after the United States moved its embassy to Jerusalem, President Donald Trump called it “a proud reminder of our strong relationship with Israel.”

Today marks the one-year anniversary of the opening of the United States Embassy in Jerusalem, Israel. Our beautiful embassy stands as a proud reminder of our strong relationship with Israel and of the importance of keeping a promise and standing for the truth.

The Jerusalem municipality marked the date by projecting Israeli and American flags onto the walls of the Old City.

The anniversary gave rise in the Israeli media to both celebration and articles exploring the effects of the embassy opening. Critics had predicted the move would lead to an increase in violence in the already tense region, although defenders of the move said no such backlash came about. The last year did however see deadly riots at the Gaza border and this month’s rain of rocket fire by the Hamas and Islamic Jihad terrorist groups.

The U.S. ambassador to Israel, David Friedman, wrote in Israel Hayom that the move “places the United States firmly on the right side of history.”

“Contrary to all the negative predictions, the Jerusalem embassy has been an extraordinary success, advancing peaceful coexistence, bilateral cooperation and cultural exchange between and among Israelis, Palestinians and Americans,” Friedman said in the article published Sunday.

The Palestinian Authority’s news agency, Wafa, did not share such a positive view. In an article published Tuesday, it said that 60 Palestinians had been killed and more than 100 injured due to Israel’s response to protests against the move.

Only Guatemala has permanently followed suit in moving its embassy to Jerusalem in the past year. Paraguay opened an embassy in the city in May, but then closed it and returned to Tel Aviv after a new president was elected.