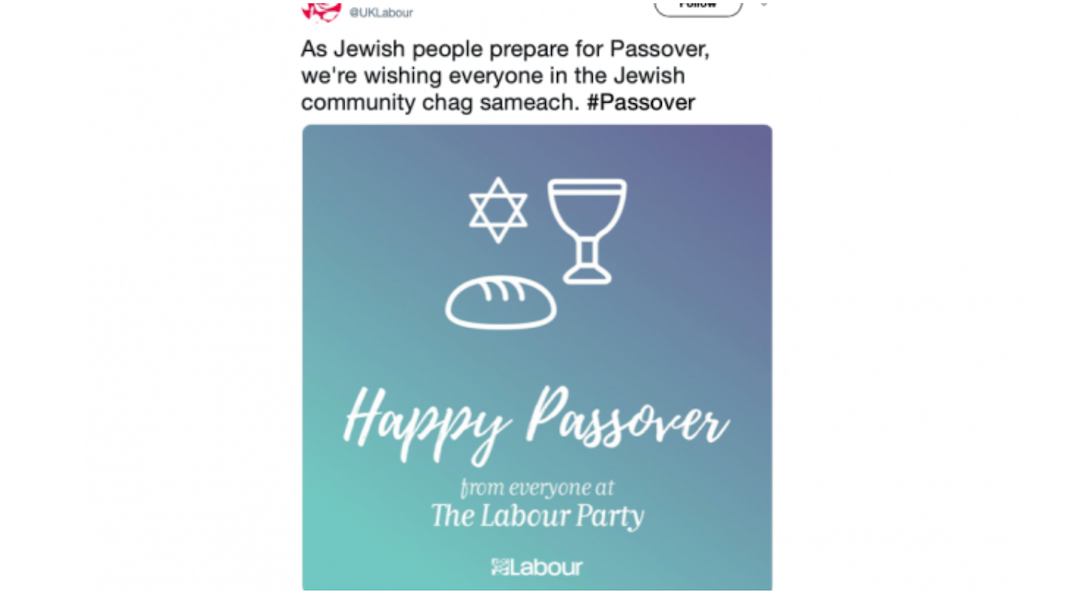 (JTA) — Britain’s Labour Party tweeted and then deleted a Passover greeting to Jews because it made a salient mistake: It featured a picture of a loaf of bread, a foodstuff banned during the weeklong holiday.

The tweet, which was ridiculed online, was posted Friday and removed within two hours. The updated greeting, which originally featured a Star of David and wine glass along with the bread, featured only the star.

Matzah, the unleavened cracker eaten to commemorate the Hebrews’ hasty departure from Egypt, is the usual symbol for Passover.

To some, the snafu underlined the current lack of trust between Labour and Jews in Britain and beyond.

The British Labour party, which has been wracked by anti-Semitism scandals for years, tweeted a Passover greeting—featuring bread. They had to correct it. You cannot make this up. pic.twitter.com/K7ExQakMwY

Whose half-baked idea was this? https://t.co/qx9LGQ37ez #Passover

Why is @UKLabour’s #Pesach message different from all others?

It has a loaf of bread on it….https://t.co/Vn2PKYIpmI …#Passover #matzah

Labour’s leadership under Jeremy Corbyn is accused of tolerating anti-Semitism in the party’s ranks and even encouraging it with anti-Israel as well as what some have deemed anti-Semitic rhetoric.

“I’m not ready to laugh about this yet. I’m genuinely appalled,” David Hirsh, a senior lecturer at Goldsmiths, University of London, and author of the 2017 book “Contemporary Left Antisemitism,” wrote on Facebook.

Hirsh, who left Labour in protest earlier this year, wrote: “The Labour Party is trolling the Jewish community now” with the bread graphic.

“The thing is — they have no credit with us; we have no reason to interpret anything in a friendly way; they’ve used it all up,” he added.