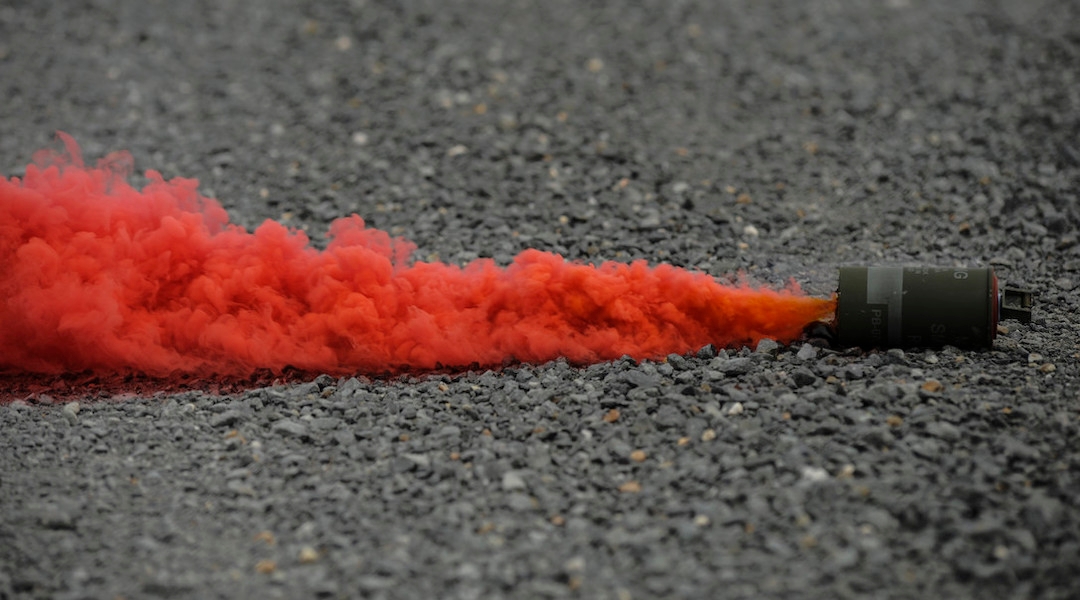 (JTA) — Ultranationalists in Ukraine protested outside a Jewish community building with smoke grenades.

Men from the National Corps group, a namesake of a unit of the Azov Battalion militia set up in 2014 by the Ukrainian government, set off the grenades Monday in front of the building in Kharkiv.

Protests outside Jewish institutions are rare in Ukraine, which saw some of the worst pogroms perpetrated against Jews anywhere before and during the Holocaust.

The protesters spray-painted the words “Feldman thief” on the sidewalk in front of the building. Alexander Feldman, who was born in Kharkiv, is a Jewish philanthropist and president of the Ukrainian Jewish Committee group.

Separately, the Israeli and Polish ambassadors to Ukraine signed a joint letter to the mayor of the Ukrainian city of Ivano-Frankisvsk protesting the unveiling there of a monument honoring Roman Shukhevych, a collaborator with the Nazis who is implicated in the murder of countless Jews and ethnic Poles.

Poland and Israel rarely speak out out on the rampant glorification of collaborationists in Ukraine, a country which is seen by many in the West as a key buffer against Russian expansionism. Joint Israeli-Polish action on the issue is rarer still — especially since the eruption last year of diplomatic crises over disputed allegations of Polish complicity in the Holocaust.

Shukhevych, who is celebrated as an anti-Soviet patriot, was “personally responsible for” murdering tens of thousands “by bullets, fire, rape, torture and other beastly methods — only because they prayed to God in Polish or Hebrew,” Ambassadors Joel Lion and Bartosz Cichocki wrote.