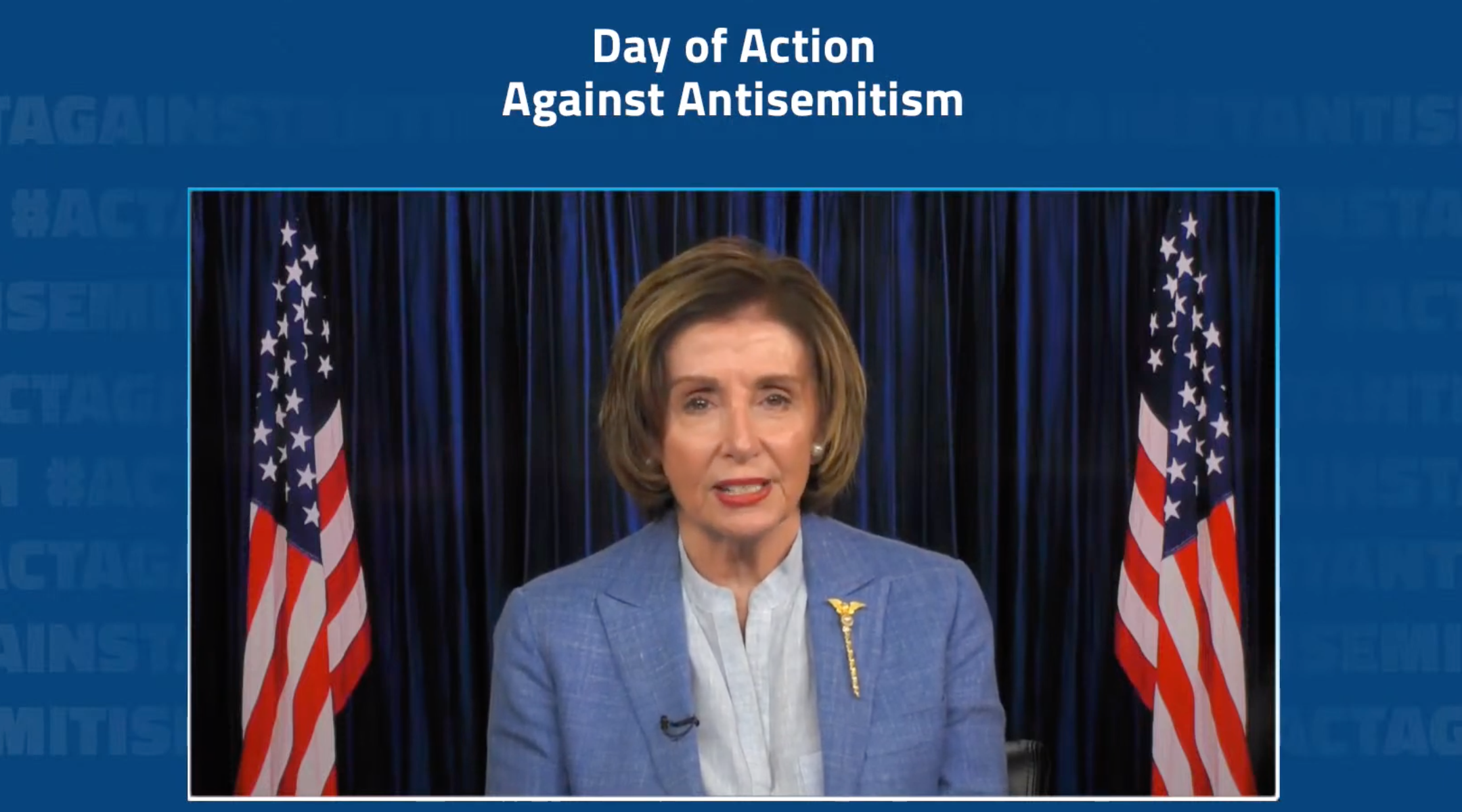 House Speaker Nancy Pelosi speaks at a virtual rally to combat antisemitism on May 27, 2021. (Screenshot)
Advertisement

(JTA) — A “virtual rally” to combat antisemitism exhibited rare agreement between the leading Republicans and Democrats in Congress on the need to fight hatred of Jews.

The Zoom event, which approximately 23,000 people attended Thursday, was held in the wake of an increase in antisemitism nationwide surrounding the recent conflict in Israel and Gaza. Jews have been assaulted and synagogues and other Jewish establishments vandalized in cities across the country.

The event, which was organized by the Anti-Defamation League as well as all four major Jewish religious movements and other leading Jewish groups, was devoid of the partisan battles that have often accompanied accusations of antisemitism in recent years. A representative for President Joe Biden touted his administration’s actions to fight hate, and Republicans mentioned a bill they’ve proposed to combat antisemitism, but neither side called out the other by name.

“In the last few weeks we have seen a disturbing spike in bigotry and violence against Jewish communities across the country and around the world,” Pelosi said. “This hatred is horrific and heartbreaking. We must not hesitate to call it for what it is: antisemitism.”

McCarthy vowed that “the monsters who are attacking Jewish Americans [will] face swift, durable justice.” Schumer said “antisemitism is vile, reprehensible and countering everything that America stands for.” McConnell said “the modern world knows too well what happens when this evil is met with silence.”

The event featured a roster of politicians, celebrities and religious leaders, from NBA Hall-of-Famer Ray Allen to Timothy Dolan, the Catholic archbishop of New York, who spoke while standing next to a menorah. There were representatives of organizations representing Black, Latino, Chinese, Muslim and Indian Americans, among others. Several of the speakers emphasized the need to root out all forms of hate, an approach that some have criticized for diminishing the unique problem of antisemitism.

The event recalled last year’s march against antisemitism in New York City, which drew 25,000 people to walk across the Brooklyn Bridge protesting a spate of attacks in late 2019 against Jews in the New York area. That event, despite its impetus, had an uplifting air, with loud music, people chatting with their friends and a rally following the march.

There have been smaller in-person rallies in support of Israel and against antisemitism in recent weeks as well. The energy at Thursday’s event, held remotely, was calmer and more formal. Some speakers lamented that, after years of rising antisemitism, these gatherings were still necessary.

“I wish we didn’t have to be here, rallying in defense of Jewish communities around the world and right here in our own country,” said Rep. Ted Deutch of Florida, who is Jewish. “But we do. We always do, because none of us will remain silent as Jews are intimidated, threatened, attacked and even killed because of who we are.”