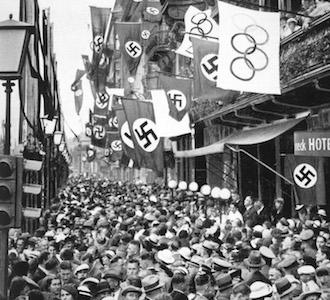 The Associated Press, in a dispatch from Garmisch-Partenkirchen, scene of the Olympic Winter games, reports that Rudi Ball, German “non-Aryan” ice hockey player who was a self-exile in Paris and Milan, has joined the German Olympic team at the invitation of the Reich sports leader, Captain Hans von Tschammer Osten.

“He is Germany’s sole Jewish Olympic representative thus far,” the A. P. reports. “Rated as the nation’s best hockey player, he came here a fortnight ago. His presence became known generally only today (Saturday) when he appeared suddenly as a driving power for the national Olympic squad.

“In the training match between the Olympic team and another picked team, strengthened by three Canadian professionals, Ball scored one goal and paved the way for a second.

“He had left the country for France and Italy when the Nazis started their anti-Semitic campaign, leaving behind him a weakened national team which had never regained its old power, despite the efforts of Canadian trainers.”