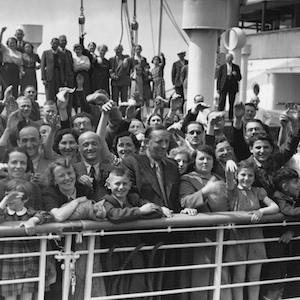 The Dominican Republic today became the first country in the Western Hemisphere to open its doors to the political refugees of Europe under the auspices of the Intergovernmental Committee on Refugees.

General Rafael Trujillo, army chief and former president of the Republic, told reporters at his Legation here that 500 refugee families will immediately be admitted to his nation under a plan developed by the committee. General Trujillo made the announcement just prior to attending a luncheon of officers of the committee.

He said that the refugees will not be subject to the payment of $500 per person as established by the Dominican immigration laws. He revealed also that he will personally make himself responsible for the upkeep and education, for a period of two years, of a number of unmarried persons among the refugees.

“These refugees,” General Trujillo said, “will not be considered immigrants. They will be considered as refugees going to work under colonization plans whom my government will receive with humanitarian feeling. We will give them every opportunity to work. In accordance with the plans which are being worked out with the refugee committee, 500 families will be admitted. I will personally make myself responsible for the upkeep and education, for a period of two years, of a number of unmarried young men and girls who will come with these families.”

General Trujillo praised President Roosevelt’s declarations to the Intergovernmental Committee, adding that “we have taken positive measures to solve this problem of humanitarian importance.”

Meanwhile, the White House announced that Paul van Zeeland, former premier of Belgium and president of the Coordinating Foundation, will confer with Mr. Roosevelt at noon tomorrow. The committee, which has been engaged in informal discussions since its meeting last week, will resume its formal conferences tomorrow at the State Department.

Under the plans of the committee, the 500 families who will find new homes in the Dominican Republic will be drawn from the German refugees in the neutral states of the Netherlands, Belgium, Switzerland and the Scandinavian countries. These governments have been particularly hard pressed to care for the approximately 60,000 refugees who successfully fled Germany.

General Trujillo, speaking with Minister Pastoriza as interpreter, quoted the categories statements of Secretary of State Cordell Hull and the British Admiralty in denying that his nation harbored German submarines. Refuting allegations of pro-Nazi influences in the Republic, the General said that his Government was the “first to request the cooperation of the United States for the patrol of the surrounding seas and the American navy and aviation corps have cooperated in this task with the Dominican authorities.”