200 Policemen Keep Order During Funeral of the Rosenbergs 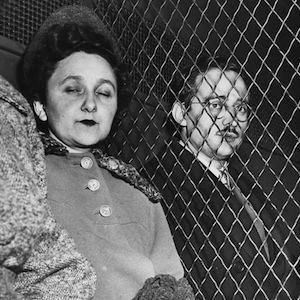 About 200 policemen were put on special duty today during the funeral of Julius and Ethel Rosenberg who were executed Friday at Sing Prison for supplying the Soviet authorities with secret data on atomic discoveries. The two were buried in Wallowed Cemetery at Pinelawn, L. I. The funeral services were conducted by Rabbi Abraham Cronbach of Cincinnati, one of the three clergymen who Urged President. Eisenhower last week to grant clemency to the Rosenbergs.

Differences of opinion were expressed yesterday by rabbis in New York in the course of their sermons tin the Rosenbergs’ execution. Rabbi Ira Eisenstein said from his pulpit the Synagogue of the Society for the Advancement of Judaism (Conservative) that “Jewish tradition is unalterably opposed to capital punishment.” Rabbi David J. Seligson, in a sermon at the Central Synagogue (Reform) declared that “a true judgment was passed upon the Rosenbergs in accord with our American principles of evidence.”