Drive on for More Jewish Cops 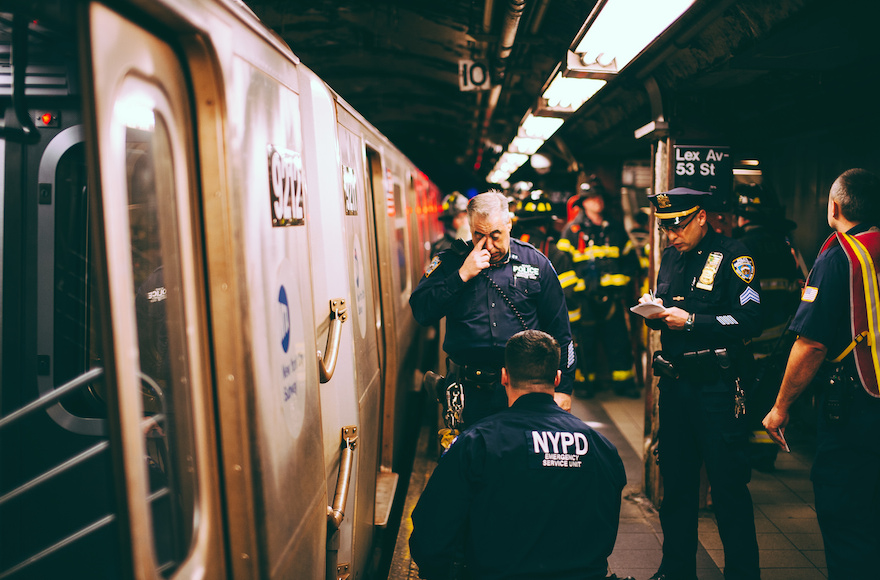 Three Jewish policemen have been assigned to carry out the first recruiting campaign in the history of the New York City police department to increase the tiny proportion of Jews in the force. Among the 29,000 New York’s “finest,” there are currently” only 806 Jewish men and women, which adds up to 2.7 percent of the total. The total number of Jews in the city is around two million, or about 23.2 percent of the total city population.

It is easy to see discrimination in those figures and, in fact, Joel Frankel, president of the Shomrim Society of New York City, the socio religious organization of Jewish police officers did make that charge in July. He added that Jews were the smallest minority in the police department and that no effort was being made to recruit Jews for the force.

A charge of anti-Jewish discrimination would necessarily be based on the proposition that Jews have regularly sought to become police and have regularly been rejected. Again, the fact is that Jews historically have considered police work as of low social status, a problem compounded by the low pay of earlier years.

For Jews with a long history of living in self-contained communities in the “old country,” in which police were never needed or viewed with suspicion and hatred as minions of the oppressor, and with Jews themselves often victims of police brutality, police work has hardly been a high priority career choice for young Jewish people. Another inhibiting factor, by no means confined to Jews, has been concern over the physical dangers of police work.

Partly in response to criticism over the small number of Jewish police officers and partly in an effort to reach young adults in all sections of New York’s fantastically variegated population, Police Commissioner Donald F. Cawley introduced this summer a new approach to recruitment methods. His announced goal was to achieve a more balanced police department “responsive to the ethnic needs of New York City.”

College-trained Jewish policemen were added to the recruiting department, headed by Captain Michael J. McNuity. The assignment for police officers Lewis A. Berns, 32, Barry J. Lichtenstein, also 32 and George Drucker, 26, is to try to reach as many young Jews as possible to inform them of “the excellent career opportunities” in the police department.”

Berns and Lichtenstein began their 120-day assignment on Aug. 1.. Drucker was assigned to their team shortly thereafter. In an interview with the Jewish Telegraphic Agency, Berns and Lichtenstein said they had no target figure for additional Jewish recruits. But they cited the fact that in the early 1940s, when many Jews took police jobs because jobs generally were scarce, a record proportion of eight percent of a much smaller force than the present one were Jews. Noting that peak came without organized recruiting, they indicated they hoped to achieve a higher proportion by the time their assignment, ends on Nov. 30.

The two officers stressed that they were still largely in the organizing stages of their project. They have visited or received assurances of cooperation from such organizations as B’nai B’rith, the American Jewish Committee, the New York Board of Rabbis, the American Jewish Congress and the Federation Guidance and Employment Service, and a number of Jewish Ys. Rabbi Alvin Kass, spiritual director of the New York Shomrim Society and Jewish chaplain in the police department, has helped, as has Louis Weiser, executive vice-president of the National Conference of Shomrim Societies.

RABBIS WILL BE ASKED TO HELP

Once the school year is under way next month, the three Jewish recruiters plan to contact Hillel directors throughout the metropolitan area. They have planned a mailing to 150 rabbis in Brooklyn, as a first step toward reaching the city’s hundreds of rabbis. They are developing a poster for Jewish organizations, stressing the availability and desirability of police jobs.

They can make a persuasive economic case. In recent years, salaries and fringe benefits for police have risen rapidly. A New York City police officer now gets a starting salary of $11,200, which rises to $14,300 after three years, with every likelihood of still higher pay in upcoming contracts. Unlimited sick leave with full pay, four weeks vacation after one year; fully-paid medical and hospitalization insurance, financial support for college attendance, an excellent retirement plan and 11 paid holidays are among the other economic attractions, Berns and Lichtenstein pointed out. The educational requirement is a high school diploma or its equivalent.

They insisted they found almost no manifestations of the traditional Jewish reluctance or hostility toward the idea of police careers in all of their meetings so far with Jewish communal officials. On the contrary, they said, the receptions given them have been unanimously warm and helpful.

NO PLANS FOR ORTHODOX JEWISH RECRUITS

The Jewish recruiters have no plans to seek out Orthodox Jews as recruits. The police department is a quasi-military structure which must operate around-the-clock seven days a week. The question of fitting the special religious needs of observant Jews into such a structure has been discussed, and the conclusion reached is that it would be practically impossible to fit the needs of such Jews into the police system.

The problem of personal safety has been raised in their preliminary talks, and the recruiters expect it to come up more frequently when they begin to accept invitations to speak at functions planned in schools, synagogues and Jewish centers. One of their answers is that there are, of course, hazards but that, statistically, the probability of injury or death is relatively low.

They assert that 90 percent of modern police activity is in the nature of “social work.” Neither Berns nor Lichtenstein, in a decade of police work, has ever had to fire his gun while on duty. Another answer is their finding that police are not considered in the risk category by insurance companies and can obtain insurance without paying a special premium.