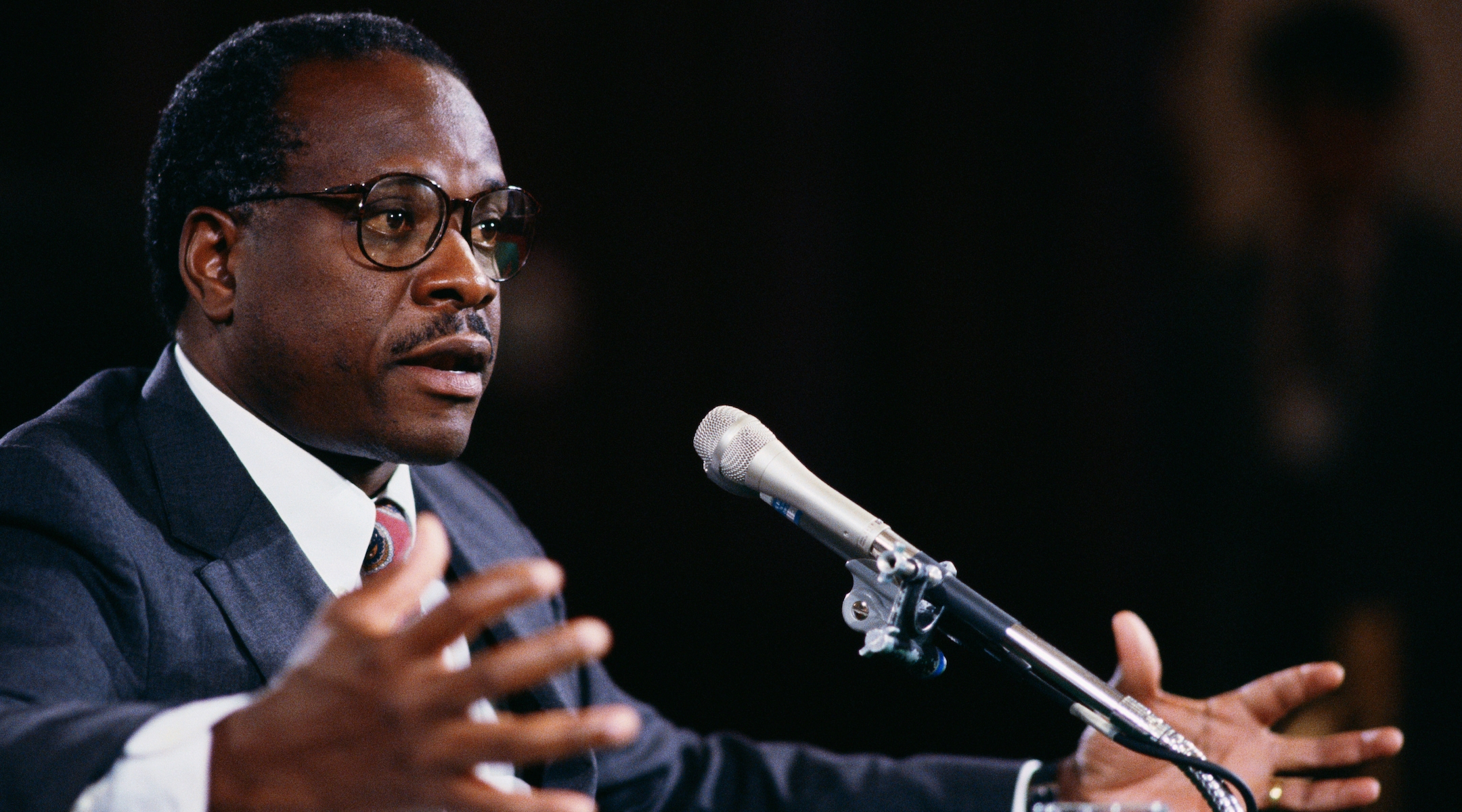 At least some Jewish groups are insisting that Thomas, who is President Bush’s nominee for the U.S. Supreme Court, unequivocally repudiate Farrakhan, not simply the anti-Semitism he has been spouting since 1972.

Thomas issued a statement Friday saying he could not “leave standing any suggestion that I am anti-Semitic,” and denied that he was.

The uncertainty arose when the Dallas Times Herald disclosed that statements in praise of Farrakhan and his self-help programs for blacks were included in two speeches prepared for delivery by Thomas in the fall of 1983, when he was chairman of the Equal Employment Opportunity Commission.

The texts of the two speeches have Thomas describing Farrakhan as “a man I have admired for more than a decade.”

Thomas, a black conservative, currently sits on the U.S. Court of Appeals for the District of Columbia Circuit. Bush selected him to replace retiring Supreme Court Justice Thurgood Marshall, a liberal who is the first and only black to sit on the nation’s highest bench.

In his statement Friday, Thomas said, “I am, and always have been, unalterably and adamantly opposed to anti-Semitism and bigotry of any kind, including by Louis Farrakhan.”

He added: “I repudiate the anti-Semitism of Louis Farrakhan or anyone else. While I support the concept of economic self-help, I have never supported or tolerated bigotry of any kind.”

MAY HAVE ‘DISQUALIFIED HIMSELF’

But Abraham Foxman, national director of the Anti-Defamation League, maintained Friday that it is “not possible to separate Farrakhan’s message from Farrakhan the messenger.”

He expressed “hope that Judge Thomas, who has always eschewed bigotry, will publicly acknowledge the danger in attempting to distinguish elements of a bigot’s program which might be considered positive from an overt message of vicious racism and anti-Semitism.

“Failure to acknowledge this only legitimizes Farrakhan’s overall message of hate,” he added.

Henry Siegman, executive director of the American Jewish Congress, stated flatly Friday that if Judge Thomas expressed admiration for Farrakhan, “he has disqualified himself from service on the Supreme Court.”

But Siegman acknowledged that at this point there is no hard evidence whether or not Thomas actually made the remarks attributed to him.

Armstrong Williams, a Washington public relations consultant who was Thomas’ spokesman when he headed the EEOC, confirmed in news reports Friday that two speeches prepared for Thomas in 1983 contained a quote by Farrakhan which Thomas could identify with because it promoted black self-help.

Williams said Thomas abandoned the prepared text in a September 1983 speech to black journalists at the Capital Press Club in Washington, but used it in a speech the following month to the Association of Black MBAs in Atlanta.

Williams pointed out that in 1983, Farrakhan had not yet made his now infamous slur on Judaism as a “dirty religion” or called Adolf Hitler a “wickedly great” man.

NEEDS TO ‘CLARIFY HIS VIEWS’

The American Jewish Committee appeared to take that into consideration when issuing a statement of concern on the matter Sunday.

“While it is important to remember that Judge Thomas’ speeches occurred before Minister Farrakhan’s anti-Semitism became common knowledge in 1984, it would be appropriate for the Senate Judiciary Committee to inquire about this matter,” said Alfred Moses, the agency’s president, and David Harris, executive vice president.

The Senate panel is expected to hold confirmation hearings for Thomas in September.

Other Jewish leaders maintained that the Black Muslim minister’s diatribes against Zionism and charges that Jews controlled the American news media had been public knowledge for more than a decade.

In Los Angeles, the Simon Wiesenthal Center released a brief statement Friday saying, “We are much concerned about a Supreme Court nominee who expresses admiration for Louis Farrakhan.” It urged Thomas “to immediately clarify his views on Farrakhan in light of Farrakhan’s public anti-Semitic statements made subsequent to 1983.”

Later, Rabbi Marvin Hier, dean of the Wiesenthal Center, was quoted by The New York Times as saying, “We accept Judge Thomas at his word, that he has never been anti-Semitic and repudiates Louis Farrakhan.”

But Siegman of AJCongress said the remarks attributed to Thomas “warrant the closest scrutiny by both the White House and the Senate Judiciary Committee.”

He urged Thomas, the White House and the Senate to “respond to these allegations, so that the nation may determine whether in fact Judge Thomas has allied himself with one of the nation’s most notorious anti-Semites.”