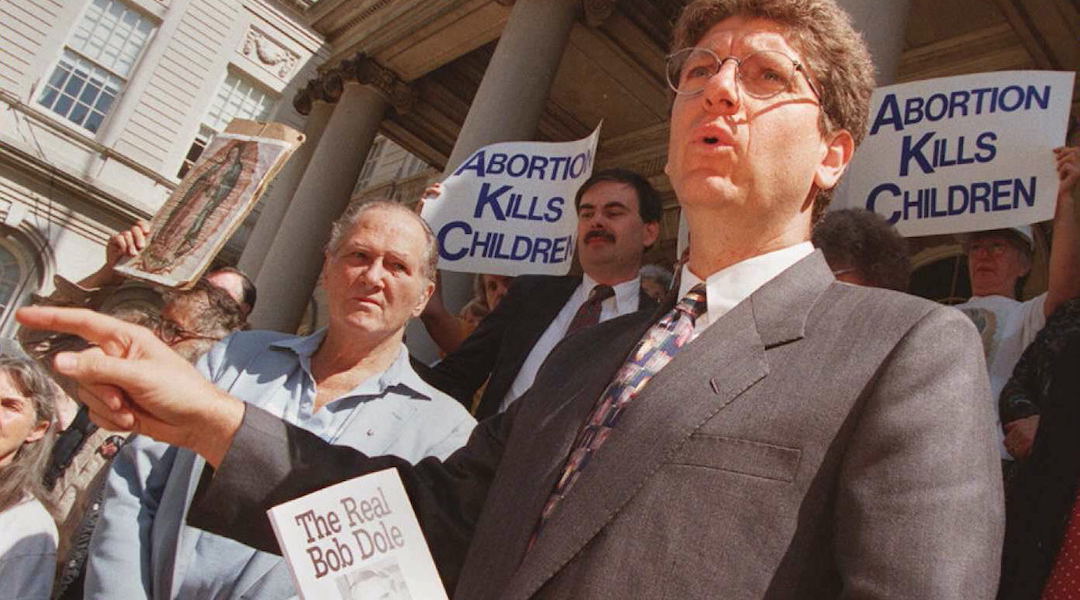 Anti-abortion activist Randall Terry speaks out against New York Mayor Rudolph Giuliani and Republican presidential candidate Bob Dole on the steps of New York City's City Hall, June 27, 1996. Terry said his group, the Loyal Opposition, would withdraw support for Dole if he did not take a strong anti-abortion stand in his platform. (Bob Strong/AFP via Getty Images)
See Original Daily Bulletin From This Date
Advertisement

“We believe the unborn child has a fundamental right to life that cannot be infringed,” begins the Republican Party’s platform plank on abortion.

“We believe this language has no place in the party’s resume of ideas,” counters Susan Cullman in her argument to drop the language from the platform altogether.

In less than three months, Republican activists will gather in San Diego for their nominating convention. But before Bob Dole is crowned as the party’s choice to face off against President Clinton, delegates will write the party’s platform.

The quadrennial ritual, though largely symbolic, has inflamed passions on both sides of the abortion debate.

For everyone arguing that Dole cannot win in November if the GOP retains its call for a constitutional amendment banning abortion, there are other activists arguing that he cannot win without it.

The fight over abortion rights serves as one of the galvanizing issues for the Republicans. Although it is arguably the most divisive issue in America today, the pro-life/pro-choice battle is emblematic of a host of social issues dividing the Republican Party – and the country.

Skirmishes over abortion give rise to schisms over other issues, such as homosexual rights, school prayer and the future of welfare.

Many Jewish Republicans, who for the most part tend toward liberal positions on social issues, were among those moderates in the party who were turned off by the strong influence of Pat Buchanan and other right-wing conservatives during the 1992 convention.

“You can’t underestimate the significance of the debate,” said one high-level Jewish official in the Republican Party. “People walked away from the 1992 convention believing the party was intolerant and had been taken over by the right wing,” the official said. “We’re petrified of leaving the same impression in 1996.”

“The intolerance of the 1992 convention hurt us,” said Alan Steinberg, deputy commissioner of the N.J. Department of Commerce and N.J. Gov. Christine Todd Whitman’s de facto liaison with the Jewish community. “We have to show that there is room in the party that supports all points of view,” he said.

The issue of abortion will continue to dominate center stage, activists say, until the platform is settled by the party faithful.

Proponents and opponents of the party’s position have begun a very public and acrimonious debate that in the end will determine whether the party remains rigidly pro-life or shifts its position to welcome the growing number of pro- choice members among its rank-and-file.

The platform plank on abortion calls for “a human life amendment to the Constitution” and endorses “legislation to make it clear that the 14th Amendment’s protections apply to unborn children.”

Emotions are already running high as the jockeying over abortion has moved from back-door negotiating sessions to the public eye.

Whitman and like-minded pro-choice governors of Massachusetts, New York and California recently banded together to all on the GOP’s to drop its pro-life stance.

The call prompted pro-life forces to threaten a loud walkout from the convention if the language is changed. Pro-choice forces countered with a threatened walkout of their own.

With this in mind, party insiders have begun the potentially elusive quest to find an acceptable compromise that would include all views on choice.

Republicans on both sides of the issue hope to work out their differences before the convention and avoid a “bloodbath on the floor in San Diego,” a Republican Party official said. “The last thing we need is grandstanding at the convention. This will be worked out behind closed doors,” said the official, who asked not to be identified.

Jewish Republicans plan to throw their political weight behind the moderate forces in the party. While the overwhelming majority of Jews traditionally vote along Democratic lines, Republican activists are working hard to attract more Jewish voters.

“Our sense is that the question of choice is a personal decision,” said Matthew Brooks, executive director of the NJC. “What is important to convey is that people can disagree on this and still be good Republicans.”

Although Republican Jews – like the rest of the Jewish community – are not monolithic on the issue of abortion rights, those organizing for the convention favor a change in the platform’s language.

The NJC has not embraced any specific language of the platform but supports language that recognizes the differences in the party over the abortion question, Brooks said.

“We need to demonstrate that the Republican Party is an inclusive party,” he said.

Dole has stayed on the sidelines since the recent flap that started when Ralph Reed, executive director of the conservative Christian Coalition, recently offered to revisit the platform language. Reed’s public flirtation with flexibility was immediately rejected by others associated with the party’s right wing.

Buchanan argues that the party must adhere to the firm rejection of abortion.

Speaker of the House Newt Gingrich (R-Ga.) entered the fray, declaring that “it would be unrealistic to try to dramatically change” the platform’s abortion language.

“The reality is, we’re a pro-life party,” he said.

The party, in fact, named a staunch opponent of choice, Rep. Henry Hyde (R- III.), to head the platform committee.

While much attention is focused on the platform debate, one Dole campaign official tried to put the flap into perspective. “When was the last time you saw anyone pull a copy of the platform out of his pocket to refer to?” he said.

“This election will be fought on the issue of whether Bill Clinton can govern, not on who wins the abortion battle in San Diego.”

But opponents of the party’s current language on abortion take the debate very seriously and are “openly worried about the outcome in November: if the plank is changed.

“The public is becoming more and more aware of what the platform is and they don’t like it,” she said.

While activists continue to research the views of the delegates selected to represent the candidates and states at the convention, pro-choice forces are calling for local supporters to join their cause. “It’s important for people to find out who their delegates will be and let them know how you feel,” Cullman said.