Behind the Headlines: Israel Opposes International Court, Fearing It Would Target Settlements 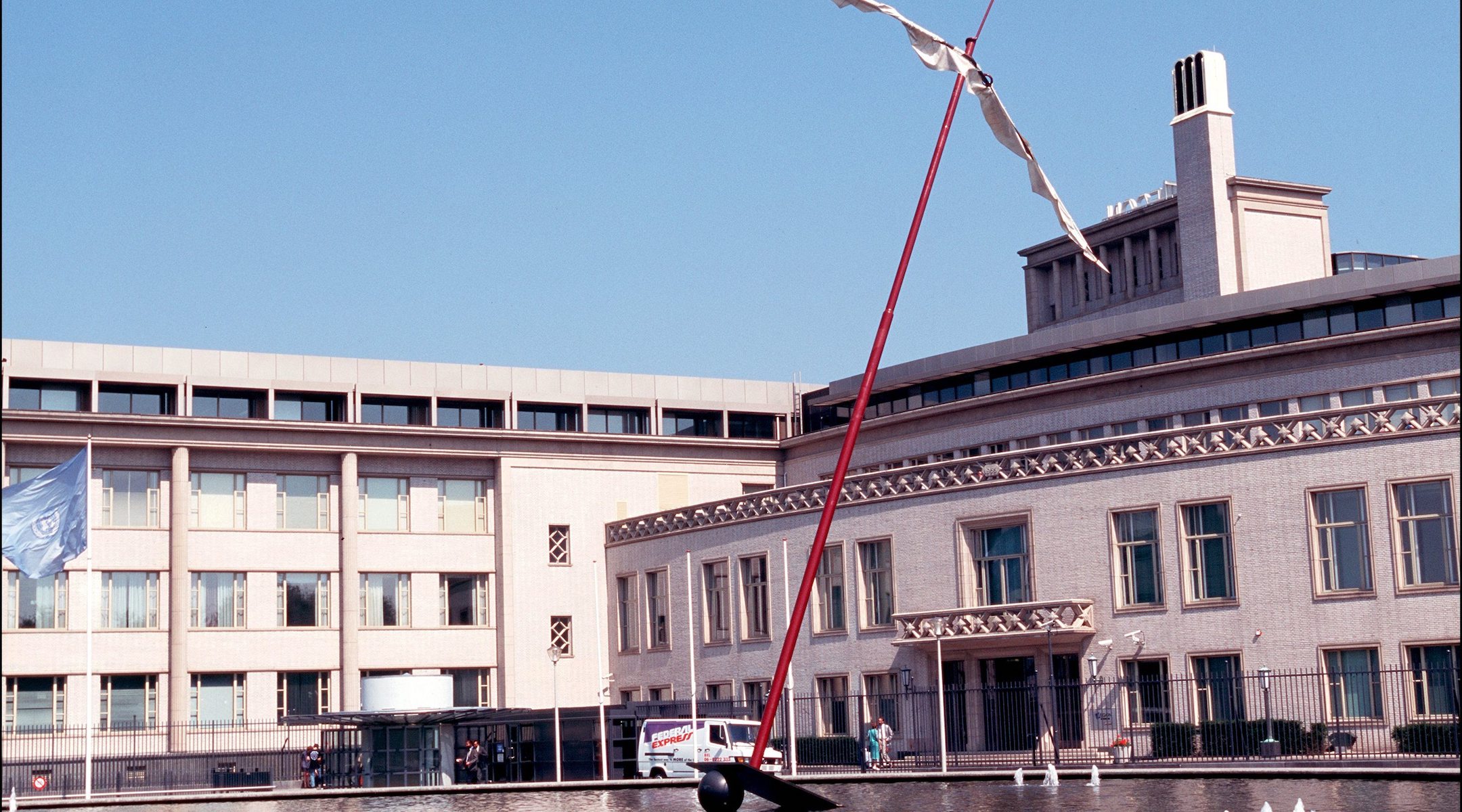 The seat of the International Criminal Tribunal for the former Yugoslavia (ICTY) in The Hague, Netherlands in June, 1995. (Raphael Gaillarde/Gamma-Rapho via Getty Images)
See Original Daily Bulletin From This Date
Advertisement

For 50 years, Jewish jurists in Israel and abroad were among the prime supporters of an international court that could prosecute war crimes whenever and wherever they were committed.

But now Israel is among a handful of nations opposing a resolution, adopted over the weekend at a U.N.-sponsored conference in Rome, calling for the creation of what is being called the International Criminal Court.

The Jewish state’s opposition is based on a single clause in the resolution under which Israeli settlement activity could be interpreted as a war crime.

Israel, which stands alongside the United States in opposing the resolution, is concerned that the clause would be used to justify the prosecution of any Israeli involved in settlement activities, Alan Baker, legal adviser to the Israeli Foreign Ministry, said in an interview.

Outside of Israel, Jewish observers have a mixed view of the court, with some expressing solidarity with Israel’s position and others pointing to the legacy of the Holocaust as a reason Jews should support it.

Richard Goldstone, the former chief prosecutor of the international war crimes tribunals for the former Yugoslavia and Rwanda, said Israel’s opposition to the court is particularly disappointing in light of the Jewish experience during the Holocaust.

He said that because the very concept of genocide and crimes against humanity has its roots in the Holocaust, the issue “should resonate in every Jewish heart, if not every Jewish vein.”

The concept of a permanent war crimes tribunal was born half a century ago, when the first such court was convened in the German city of Nuremberg to try Nazi war criminals.

The idea languished during the Cold War, but was revived a few years ago, when the ad-hoc tribunals that Goldstone headed were set up to prosecute war crimes committed during the civil war in the former Yugoslavia and the 1994 genocide in Rwanda.

Some 160 nations took part in the Rome conference, which saw weeks of haggling and compromises over the document’s wording.

Israel had long sought the court’s creation. But it began encountering difficulties two years ago, when Egypt and Syria introduced the issue of Israeli settlement activity into a draft of the resolution, Baker said.

“We fought very hard against the Arab initiative. We tried to convince others to steer away from politics, but we were the victims of political deals among the countries concerned,” said Baker. “It is very frustrating that now the court may be used against us.”

The clause in the resolution that disturbs Israel refers to the “transfer, directly or indirectly, by an occupying power of parts of its own civilian population into the territory it occupies, or the deportation or transfer of all or part of the population of the occupied territory within or outside this territory.”

Reflecting on the bind Israel was put in by the Arab-sponsored clause, Israel’s attorney general, Elyakim Rubinstein, wrote in the Israeli daily Yediot Achronot that Israel was “forced” to vote against the resolution and “did so with real regret.”

“Our only concern was to ensure as much as possible that this noble idea does not turn into yet another international political forum,” wrote Rubinstein, who headed the Israeli delegation to the Rome conference.

The clause has provoked mixed reactions among Jewish observers.

Harris Schoenberg, the director of U.N. affairs for B’nai B’rith, has long supported the court’s creation.

He noted that the resolution — which must still be ratified by 60 nations before it goes into effect, a process that could take up to five years — would create a court with jurisdiction over four broad areas, each with its own specific definition: genocide, crimes against humanity, war crimes and aggression.

He hailed one aspect of the resolution, which calls for redress — in the form of rehabilitation, restitution and reparations — for the victims of such crimes.

Schoenberg, the only representative of the organized American Jewish community to participate in the sessions leading up to the weekend decision in Rome, interpreted the clause that provoked Israeli concerns as referring to ethnic cleansing.

But just the same, he said he regretted the “potential for abuse” of the clause, adding that only a “misreading” of it could form the basis for action against Israel.

Ambassador Morris Abram, the chairman of U.N. Watch, a Geneva-based non- governmental agency, had a more grim assessment, saying the clause would be used “inevitably as a hammer against Israel and Israel alone.”

Abram, in a telephone interview, made clear that he had long favored the creation of an international tribunal — a commitment dating back to when he was a young lawyer serving on the staff of the chief prosecutor at the Nuremberg Trials.

Just the same, he said, he was “very distressed by what has come out of this process.”

Given Israel’s treatment at the hands of the international community over the decades, he said, the clause regarding population transfers “will make it possible for the [Israeli] prime minister and others to be hauled before an international court for reasons that are political.”

“No one would ever think of other occupations, such as those in Tibet or Sri Lanka,” he said.

He predicted that the court’s activities would also be directed against the United States.

But Goldstone disagreed. He said he does not believe any country, including Israel, could have a “valid objection” to the way the new court defines war crimes because the definition is based upon standards “that have been accepted by the international community.”

At the same time, Goldstone, a South African Jew who sits on that country’s constitutional court, said he was “sympathetic with an Israeli fear that any international institution is going to treat Israel partially, because Israel on many occasions has been treated unjustly by the international community.”

As one example, he cited Israel’s exclusion from participation in a United Nations regional group, a pariah status that, among other things, prohibits the country from holding a rotating spot on the U.N. Security Council.

Meanwhile, the United States, citing a range of concerns, said that if changes are not made to the treaty, it would “actively oppose” ratification and implementation.

U.S. State Department spokesman James Rubin said the United States objects mainly to what it calls inconsistencies in the treaty that would allow countries that sign the document to avoid prosecution of their nationals for war crimes for the first seven years of the court’s existence, while nations that do not sign could face prosecution.

Rubin also said the court “could inhibit the ability of the United States to meet alliance obligations and participate in multinational peacekeeping operations.”

Echoing a concern expressed by Israel, Rubin said, “In short, it could let U.S. forces be subject to politically motivated or ill-considered or unjustified prosecutions.”

The Arab League, for its part, praised the decision to set up the court. The league’s secretary-general, Esmat Abdel Meguid, said he was pleased that the resolution creating the court “regards Israeli settlements in occupied lands as a war crime.”

“We hope the court plays its desired role as an efficient and independent international jurisdiction body,” he said.