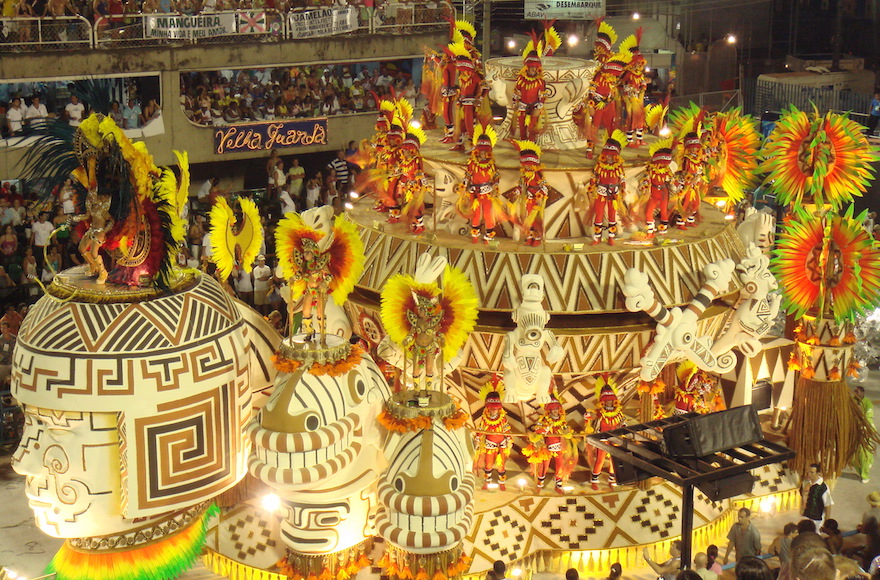 RIO DE JANEIRO, Feb. 13 (JTA) — A Brazilian Jewish group has touched off a controversy with its decision to sponsor a presentation at this year’s Carnival celebrations. Last December, the Jewish Culture Center in Sao Paulo launched a partnership with the Mangueira samba school with an eye toward having a Ten Commandments presentation at the Rio de Janeiro Carnival, which is being held on March 2 and 3 this year. Reports that the center was sponsoring Mangueira to the tune of $1 million fueled the controversy. Some Jewish activists blasted the center for being willing to spend so much, charging that the money could be better spent helping financially strapped Brazilian Jewish institutions. But the Jewish center defended its decision. “The samba parade in Rio is the largest popular culture expression in the world. This is an opportunity for the Jewish community to promote its values,” David Feffer, president of the center’s board, said in an open letter to the Jewish community. The Rio Carnival, an annual two-day event that draws some 200,000 spectators, is broadcast to more than 200 countries worldwide. In 2002, Mangueira was the winning school in Rio’s Carnival. According to Flavio Bitelman, the director of the Jewish Culture Center, the widely reported $1-million sponsorship figure is untrue. “It’s much less. People like to publish any kind of information just to satisfy their obligation to write anything,” he told JTA. Moreover, Bitelman said, the center is not spending a single penny of its own, adding that the money came from “friends” of the center, “The Jewish Culture Center decided to support this project because it matches the institution’s mission to deliver Jewish culture to the society of this country, which has received us Jews so warmly,” he said. “I am certain that everyone in the Jewish community will be very proud when they see Mangueira’s parade boasting the story of the Jewish slaves in Egypt being freed by Moses.” Mangueira will show how the Ten Commandments “have become not only the fundamentals of the Jewish religion and ethics, but also of the Christians and Muslims. The idea also to show how these peoples and religions live in peace, harmony and happiness in Brazil,” Bitelman added. Criticism of the center comes at a time when several Jewish organizations in Brazil have been facing serious financial difficulties — particularly among Sao Paulo’s 60,000 Jews and Rio’s 40,000-member community. Together, the two communities represent the vast majority of Brazil’s estimated 120,000 Jews. The difficulties stem from the general financial crisis affecting Brazil, as well as from a series of other factors, including the growing numbers of assimilated Jews who no longer support their Jewish institutions. Among those opposing the center’s sponsorship is the Sao Paulo State Jewish Federation, the umbrella organization for some 54 Jewish institutions, which has decided not to support the initiative nor raise funds for it. “As a Jewish federation, we must focus on our people — and the Jewish community’s needs come first,” said the federation’s newly elected president, Jayme Blay. On the other hand, Rio’s Jewish federation is backing the Carnival project, but not financially. When asked if the Rio federation is providing any money for the Carnival project, the federation’s president, Osias Wurman, was categorical: “We can barely pay our own bills.” According to him, the federation is involved primarily to avoid any historical misrepresentations or the improper use of Jewish symbols. Wurman, a journalist, recently wrote a defense of the project in the O Globo newspaper. “The Jewish people was given the duty to disseminate the commandments to all humanity,” he wrote. “It was in this spirit that a group of companies headed by the Jewish Culture Center decided to accept the invitation of the Mangueira samba school to establish the partnership in the Carnival.”