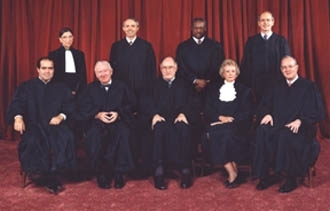 WASHINGTON, June 23 (JTA) — Many Jewish leaders are applauding the Supreme Court´s split ruling on affirmative action programs in college admissions, which declared the concept legal while striking down systems that rigidly benefit minority applicants. Supreme Court watchers say the split decision mirrors the consensus within the Jewish community — a belief that diversity in higher education is important, with concerns about preferences for minority applicants. “A carefully constructed affirmative action program is good for the Jews,” said Ethan Felson, assistant executive director of the Jewish Council for Public Affairs. “A diverse higher education environment is healthy for Jews and healthy for society.” The Supreme Court ruled Monday that the University of Michigan Law School´s program, which gives a small advantage to minority applicants, is legal, by a 5-4 decision. In a companion case, the court ruled, 6-3, that the school´s undergraduate admissions program, which gives “points” to minority applicants, is too similar to a quota and “is not narrowly tailored to achieve the interest in educational diversity,” Chief Justice William Rehnquist wrote. The affirmative action issue has split the Jewish community for more than 25 years. Historically, Jewish groups have been wary of affirmative action quotas because of the numeral limits placed on Jewish enrollment in European and American universities in the 1920s. That led many groups to vocally oppose affirmative action in the 1978 case, Regents of the University of California v. Bakke, which outlawed racial quotas. This time around, Jewish groups were less vocal in expressing their views on the subject. No major Jewish group filed a brief opposing the University of Michigan programs. Instead, the American Jewish Committee and several other Jewish groups — including the Union of American Hebrew Congregations, Hadassah and the National Council of Jewish Women — filed a brief supporting the university´s practices. “Diversity not only provides all students with a richer educational experience, but also prepares them for participation in our pluralistic democracy,” said a brief the American Jewish Committee filed in support of the University of Michigan. “Exposure in universities to those of diverse backgrounds and experiences will better equip those graduates who go on to become the leaders of our future.” Jeffrey Sinensky, the AJCommittee´s general counsel, said the ruling parses the affirmative action issue in an appropriate way. He called the decision a victory, especially given the conservative makeup of the current court. “What the court did is solomonically try to split the baby,” he said. The Anti-Defamation League´s brief supported neither side, arguing that diversity should be a goal in higher education admissions but questioning the University of Michigan´s practices. Abraham Foxman, the ADL´s national director, said the court was able to “strike a delicate balance” between the two interests in the case. “We´re satisfied that there are enough caveats in this decision that will make it a lot more difficult for people to say ‘race is enough´ ” to determine admissions, Foxman said. His main concern was over how schools and other institutions would interpret the law, possibly viewing it as a far-reaching approval of the concept of affirmative action, Foxman said. Rabbi Marc Schneier, president of the Foundation for Ethnic Understanding, said the Jewish community needs to be more cognizant of the importance the African American and Latino communities place on this issue, and not undercut them at a time when the Jewish community is seeking their support on Middle East issues. “We cannot simply impose solidarity with Israel on the other ethnic leaders and be insensitive to what is most important to their communities,” he said, adding that the Jewish communities´ muted voice on the case is in part an acknowledgment of that reality. Foxman countered that both the minority communities and the Jewish organizations agree that diversity in higher education is necessary. “This is a legitimate, bona-fide disagreement of interpretation on what is constitutionally permissible on reaching a goal we all agree on,” he said. David Saperstein, director of the Religious Action Center for Reform Judaism said he believed the undergraduate admissions program was narrowly tailored enough to conform with the Bakke ruling. “On the whole, the message from the court today is an important reaffirmation of the value and vitality of affirmative action,” Saperstein said.