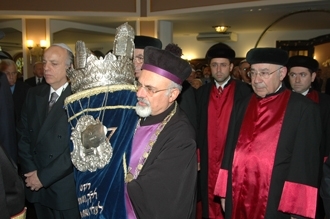 Turkey's chief rabbi holds a Torah at the reopening of Neve Shalom Synagogue in Istanbul on Oct. 11. (Courtesy of Salom)
Advertisement

ISTANBUL, Oct. 12 (JTA) — Almost a year after it was struck by a suicide truck bomb, Istanbul’s central synagogue officially reopened this week, with a ceremony that was both a solemn remembrance of the attack and a celebration of the building’s new life. Speaking to the crowd seated under the synagogue’s stately dome, Silvyo Ovadya, the Turkish Jewish community’s president, said Monday that the nearly simultaneous attacks against Neve Shalom and a second synagogue only a few miles away had a dual purpose. “No doubt the initial purpose of these bombings was killing our people and inflicting pain on us and world Jewry,” he said. Six members of Turkey’s Jewish community died in the attacks. But the bombings were also an attempt to “damage the peaceful social fabric of the Turkish society and to upset and derail Turkey, a country with a Muslim population, a secular democratic state that has continued to develop its relations with and the United States and aims to be part of the European Union,” Ovadya said. Last November’s attack destroyed the Neve Shalom synagogue’s entrance, leaving it a pile of rubble. And though the synagogue’s sanctuary was largely spared any damage, the building — located in Istanbul’s historic Galata neighborhood, where most of the city’s Jews once lived — required extensive rebuilding and reinforcing. The closing of Neve Shalom, the spiritual heart of the community, in the attack’s aftermath meant Istanbul’s Jews had to go for the last 10 months without a venue large enough to hold weddings, Bar Mitzvahs and other events. With the country’s tourism minister and Istanbul’s mayor in the audience, as well as the city’s mufti and the Orthodox and Armenian patriarchs, the ceremony began with Turkey’s chief rabbi making his way into the synagogue’s sanctuary carrying a Torah scroll to the sound of a cantor blowing a shofar. “As far as I know, in every part of the world and in every cultural setting” houses of worship “have been spared acts of violence, religious institutions have been protected by universal moral laws. There are no or very few exceptions to this,” the chief rabbi, Isak Haleva, said. “And these rare acts have always been condemned, sometimes by justice, sometimes in the face of history, but always by the collective conscience. That it remains so is of the utmost importance for the future of mankind.” Community officials said the synagogue’s rebuilding and reopening were also a chance for Turkey’s Jews to connect with the wider Jewish world, with a large part of the reconstruction funds for the synagogue provided by the American Jewish Joint Distribution Committee and by the Maryland-based Harry and Jeanette Weinberg Foundation. Attending the reopening was a delegation from the American Jewish Committee, which presented the synagogue with a Torah from a group of scrolls that recently had been rescued from Vilnius, Lithuania, after having been hidden during the Holocaust. The Torahs were taken to Israel and today, some are being donated to Jewish communities around the world. “When the synagogue was bombed,” said Alfred Moses, a former U.S. ambassador to Romania and a former president of the American Jewish Committee, which helped arrange for the Torah to be repaired and donated, “we felt that we should do something to show solidarity, and the thought occurred to me, what could be more appropriate than a Sefer Torah that was saved from the Holocaust and reborn in Israel? It can now reside in synagogue that survived an attack by those who would seek to destroy Jewish life.” “I got the sense that Jewish community there felt very vulnerable and I wanted to show them that they are not alone,” Moses added. Members of Turkey’s Jewish community, which numbers some 25,000, said the synagogue’s reopening was an important milestone. “After something sad, we need to celebrate. It’s like a Purim, after they tried to kill us, we are still alive. The synagogue looks a lot more beautiful now,” said Izel Ciprut, a 28-year-old cotton trader. Sheila Nassi, 45, said she was looking forward to once again going to weddings and Bar Mitzvahs in the synagogue. “We’ve had so many celebrations in this place and it was a pity not to be able to have them. But now we will have them again.”