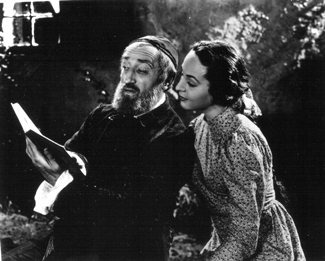 A scene from the 1939 movie ´Tevye.´ (Courtesy of the National Center for Jewish Film)
Advertisement

CHICAGO, Dec. 15 — Special alert for lovers of Yiddish theater: the National Center for Jewish Film at Brandeis University has just released a new DVD version of Maurice Schwartz’s 1939 classic, “Tevye.” The film has been restored with great care in richly textured black-and-white from an original nitrate print. Solomon Secunda’s wonderful score also went through a digital clean-up. Schwartz’s version is loosely based on two of Sholem Aleichem’s eight Tevye the Dairyman stories: Chava from 1905 and Lekh-Lekho from 1916 (with one comic scene thrown in out-of-context from the first story, Tevye Strikes It Rich). Those coming to “Tevye” from stage and/or screen versions of “Fiddler on the Roof” will be very surprised; Hodel, Motel, Perchik, Yente, and other beloved characters are nowhere to be seen. “Tevye” contains a whole new cast of characters, most of whom do not appear in the original stories either. The focus of this version is on Chava’s marriage to Fyedka, and more than anything else, it captures the deep despair and foreboding occasioned by Kristallnacht. Therefore, key roles are played by Fyedka’s non-Jewish parents (the despicable Galagans) and the Russian Orthodox priest. But the darkness is balanced by the introduction of Tzeitel’s two young children: Shloimele and Perele. Cinephiles should also adjust their expectations. 1939 was the extraordinary year when Hollywood released timeless gems such as “Mr. Smith Goes to Washington,” “Ninotchka,” “Of Mice and Men,” “Stagecoach,” “The Wizard of Oz,” “Wuthering Heights” and of course, “Gone With The Wind.” But even though it is relatively primitive cinematically, “Tevye” is extraordinary as a recorded play. Although Schwartz opened the frame with some outdoor location shots, all of the most moving moments occur inside the house. Of particular note are a luminous Havdalah ceremony, the scene in which Tevye tenderly teaches Shloimele how to chant daily prayers, and the wordless but intensely emotional sequence in which Tevye packs his books after he’s ordered to leave the village. These scenes are likely very similar to their original theatrical staging. Schwartz’s “Tevye”: Not like your grandmother’s “Fiddler on the Roof.” Schwartz, who was born in the Ukraine in 1890 and died in Tel Aviv in 1960, founded New York’s world famous Yiddish Art Theatre in 1926. He acted in both American and European films, appearing on screen for the last time as the prophet Daniel in the 1953 Hollywood feature “Slaves of Babylon.” Extras on the new NCJF DVD include clips from two of his best known roles: “Leybke” in the 1924 silent film “Yiskor” and “Moses” in the 1932 screen adaptation of Solomon Asch’s play “Uncle Moses.” In 1991, the Library of Congress added “Tevye” to the National Film Registry, thereby naming it one of the great American films of all time. The new “Tevye” DVD can be ordered directly from the NCJF website (www.jewishfilm.org) or by calling 781-899-7044. Copies will also be available in selected Jewish bookstores and museums in time for Chanukah. Jan Lisa Huttner is the Managing Editor of Films for Two: The Online Guide for Busy Couples. A complete archive of her reviews for the World Jewish Digest, including her review of two recent 40th anniversary revivals of Fiddler on the Roof, can be found in the “Columns” section of www.films42.com.