In Syracuse, with eyes turned to Rome 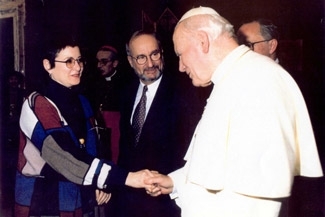 SYRACUSE, N.Y., April 4 (JTA) — The waiters in the hotel banquet room were just serving the apple pie when my cousin came back to our table and whispered, “He died.” The banquet was the celebration lunch following a joyous family simcha, the bar mitzvah of my nephew, Jonah Joseph Meighan Gruber. “He” was Pope John Paul II, the Roman Catholic pontiff who had done the most in history to bridge the gap between Catholics and Jews, and a figure I have been writing about for more than 25 years. When I had left Rome several days earlier to come to Syracuse, I had been well aware that John Paul was in precarious health. On Easter Sunday, I had watched him on Italian television attempting to bless the huge crowd assembled in St. Peter’s Square below his window. It was a heartbreaking image of a suffering man, unable to speak and apparently in pain. I had met the pope and shaken his hand. I had chronicled the dramatic evolution of his policy regarding Jews and Israel. I had been a correspondent in his native Poland during the rise of Solidarity in the early 1980s and had witnessed his role in cracking Communist rule in Eastern Europe. And I had experienced firsthand the way this pope “from a far country” had become a familiar presence in Italy. Part of me had wanted to stay in Rome and wait, along with the rest of the media, for the inevitable end. And it would not have been simply for professional reasons: I wanted simply to be in Rome, and at the Vatican, at a time of historical importance. In addition to Jonah’s bar mitzvah, however, I had other commitments in North America, and canceling my trip was out of the question. News of the pope’s decline accompanied me as I traveled, and it was clear by the end of the week that the crisis had come. In my hotel in Syracuse last Friday, I stayed glued to CNN until it was time to leave for the Temple Society of Concord, one of the oldest Jewish congregations in the United States. My entire immediate family, as well as many other relatives, had come to Syracuse from California, Texas and other parts of the country for the bar mitzvah. We took our places in the chapel for Kabbalat Shabbat, proud of Jonah and delighted to be together for such an important, happy event. But even as Jonah stood at the center of our gaze, remarkably poised but slightly stiff in his bar mitzvah suit, I couldn’t help thinking about what was going on in Rome. I wasn’t the only one to do so: Rabbi Sheldon Ezring felt moved to include the dying pope in his remarks to the congregation. Ezring urged us to think of a man with whom the rabbi frequently had disagreed because of John Paul’s conservative views — but a man, Ezring said, who would leave the world a better place when he died because of his efforts to improve Jewish-Catholic relations. He mentioned John Paul’s historic visit to a Rome synagogue in 1986 and his pilgrimage to Jerusalem in 2000, when he visited Yad Vashem, placed a prayer at the Western Wall that committed him to “genuine brotherhood with the People of the Covenant” and asked forgiveness for past sins against the Jews. At services on Saturday morning, Ezring again mentioned the dying pope, this time offering an informal prayer just before the recitation of Kaddish. Jewish leaders around the world, including the highest authorities in Israel, have joined in the outpouring of tribute and commemoration since John Paul’s death. Still, I found it quite moving that the rabbi in a local synagogue in an ordinary American city also had felt so touched by the pope and his deeds that he had turned thoughts, words and prayers to him from the bimah. And I was glad that it was my nephew’s bar mitzvah service in which they were expressed. As I noted, word of the pope’s death came at the height of Jonah’s post-bar mitzvah celebration. It didn’t stop the party, but it did spark discussion of popes and Catholicism and Jewish-Catholic relations. “People say that Pope John Paul II was good for the Jews,” one of my brothers said. “But I don’t think that’s the way to put it.” When Jews are considered, he said, John Paul was good for the Catholics. “What he said and what he did didn’t really have anything to do with us,” he said. “Their importance was what they did for Catholics. They made Catholics confront their own failings and accept their own moral obligations. They made Catholics more moral.” That, he said, could serve as a lesson for Jews as well, in our own dealings with other peoples and religions.