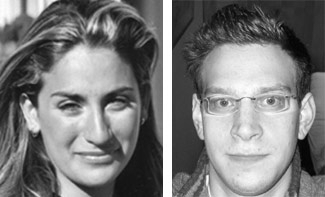 LONDON, April 18 (JTA) — Jewish students have demanded action after warning that Britain’s main student representative organization has failed to address rising levels of anti-Semitism on campus. The issue made national headlines after three Jewish members resigned from leading positions in the National Union of Students to protest the group’s apathy in tackling anti-Jewish prejudice. In front of a packed hall at the group’s annual conference, Luciana Berger, 23, a graduate student at London’s Birkbeck College, announced that she was leaving the union, as were colleagues Mitch Simmons and Jonny Warren. In an emotional speech, Berger, the co-organizer of the union’s anti-racism and anti-fascism campaign, accused the NUS leadership of having failed consistently to address a full year of anti-Jewish incidents on campus. “While I accuse no one of anti-Semitism, this year NUS has been a bystander to Jew-hatred,” Berger said. “In the past three days, at the heart of our democratic union, to my horror, I have seen the events of the year replayed.” Berger said she was disgusted by the union’s failure to take action against anti-Semitic leaflets distributed at the conference — including one that cited the Protocols of the Elders of Zion and compared the Jewish people to the Nazis. She also was angry at the union for not living up to its commitment to provide kosher food for around 70 Jewish delegates at the conference. “I would hope in the next year that you, the membership, don’t just hear this message, but listen and demand from your leadership that they stop hiding behind procedure and bureaucracy and face up to the fact that through their inaction they have created a vacuum where Jewish students do not count,” she said. Berger first appeared in front of the conference as an 18-year-old when she talked about her own experience of anti-Semitism on campus. She was spat at and verbally abused in her first term at Birmingham University, she said at the time. Back then, she felt she had the full backing of the union, she told JTA. “In the past five years the NUS leadership has been very supportive of Jewish students,” she said. “This year they have turned a blind eye.” Berger’s colleagues admit to being baffled by the lack of NUS action over allegations of anti-Semitism. “It’s a controversial issue,” said Simmons, 23, a student of politics at Birmingham University. “Politically it’s easier for the NUS leadership to ignore it and brush it under the carpet.” “Perhaps they’re almost bored of it,” added Warren, 24, a law student. “Since we have resigned it seems like nothing has been done.” He dismissed a statement by NUS’ national president, Kat Fletcher, promising to launch an investigation into the allegations, as “very weak.” The Union of Jewish Students said the situation was so grave that nothing less than a national inquiry on anti-Semitism in the student community would do. The Jewish student group warned that the NUS was in danger of turning to “the politics of hate under weak leadership.” Feelings on British campuses have run particularly high since the start of the Palestinian intifada in September 2000. There are fears that the vote scheduled this week by the Association of University Teachers on an academic boycott of Israel will heighten tensions even more. The School of Oriental and African Studies, part of the University of London, has been of particular concern to Jewish students. Last year the college hosted a conference on resisting what it called “Israeli apartheid,” and in February the students’ union banned a speaker from the Israeli embassy who was set to address a Jewish society meeting. That move eventually was overturned by college administrators. In March, the SOAS student magazine published an article that belittled the concept of “innocent” Israeli victims and described all of Israel as a Jewish colony that must be dismantled. This month, NUS decided that no action had to be taken in response to a comment made during an SOAS event that burning down a synagogue could be considered a “rational act.” Jewish community leaders said such apathy showed a dismal lack of solidarity toward students complaining of anti-Semitism. “I have consistently asked Jewish students to be at the forefront of the fight against racism, prejudice and Islamophobia,” said Britain’s Orthodox chief rabbi, Jonathan Sacks. “They have done so with commendable courage. I would hope that NUS would show similar courage in fighting all attempts to intimidate Jewish students.” “Luciana, Mitch and Jonny have taken a principled decision in the face of a wholly unsympathetic executive,” said Jon Benjamin, chief executive of the Board of Deputies, the representative body of British Jewry. “They have worked tirelessly for all students, not just Jewish students, but when their own rights have been infringed, their union has not supported them.” That was a sentiment echoed by Warren, who traces his own involvement in student politics to his undergraduate days at Leeds University, when he joined efforts to combat campus activities by the youth wing of the extreme-right British National Party. “I want to see the leadership of NUS recognizing the contribution Jewish students make,” he said. “We shouldn’t be the only ones fighting anti-Semitism. Everyone should be fighting all forms of racial prejudice,” Simmons added. “People pay lip service to ideas of equality but don’t seem to care about anti-Semitism.”