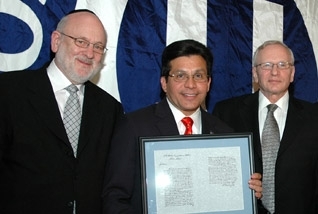 NEW YORK, June 7 (JTA) — Anecdotal evidence has suggested that an increasing number of Orthodox Jews supported President Bush in 2004 — and that more members of this constituency may lean Republican in the future. That burgeoning relationship was on display this week in New York, when the U.S. attorney general, Alberto Gonzales, spoke at the Orthodox Union’s annual dinner. Addressing issues such as religious liberties and the U.S. government’s fight against terrorism, Gonzales received a warm reception from the 1,000 people in attendance at Sunday night’s event. The event marked Gonzales’s first address to a Jewish organization since he became attorney general in February. Gonzales called the USA Patriot Act a necessary means of combating terrorism, citing the importance of constant vigilance and determination and rejecting the view that the legislation violates civil liberties. “There has not been one single verified violation of privacy rights or civil liberties in its three-and-a-half-year history,” he said. “We can and we will protect our civil liberties and our citizens from terrorism. The two are not mutually exclusive.” Turning to religious issues, Gonzales noted the importance of the Religious Land Use and Institutionalized Persons Act of 2000, which protects religious groups from discrimination in zoning and requires the government to make religious accommodations for prisoners. He named several cases the Justice Department has successfully prosecuted under it. The department is “committed to fighting religious-based discrimination and prosecuting religious-based crimes,” he said. The attorney general also praised the contributions of Jews to American life, comparing their status as immigrants to his own experiences growing up as a poor Mexican American. In 2004, Bush earned about 24 percent of the Jewish vote, marking a 5 percentage-point increase from the 2000 election. Post-election studies suggest the increase was due in large part to the influence of the Orthodox, who are generally more hawkish in foreign policy and more supportive of the role of religion in domestic policy than other Jews. A poll released last year by the American Jewish Committee found that 60 percent of Orthodox Jews supported Bush. According to Brandeis University historian Jonathan Sarna, author most recently of “American Judaism: A History,” Orthodox Jews’ growing sympathy for the GOP has led the administration to cultivate their support. “I think it is very telling that the Republicans are making time to see them,” Sarna said. “If you were a Republican” trying to nurture Jewish votes, “this wouldn’t be a bad group to build on.” Sarna noted that the administration’s outreach to the Orthodox Union, the main group of centrist Orthodoxy, reflects a recognition that the Orthodox are a key electoral demographic. “The party is eager to be grateful to Orthodox Jews to show that they are grateful for these votes, but I don’t think they have by any means turned their back on other Jews,” he said. O.U. officials said they appreciate the attention. “We’ve developed a close working relationship with the Bush administration and particularly the Justice Department,” said Nathan Diament, director of the O.U.’s public policy arm, the Institute for Public Affairs. So did many of those in attendance. “I was very impressed by his speech,” said Shmulik Rosenberg, a student at Yeshiva University in New York who attended the dinner. “I thought the cases that he brought really showed where the government stands in terms of religious freedom and support for the Jewish community.” In particular, Diament said, the White House has been especially receptive to the Orthodox community’s concerns on religious liberty issues. In March the union issued a statement strongly supporting President Bush’s faith-based initiative, which seeks to increase the role of faith-based groups in providing social services. On other religious issues, the Orthodox Union has supported the display of the Ten Commandments on government property, the intervention of Bush and Congress in the case of Terri Schiavo, and the power of the U.S. attorney general to restrict assisted suicide. Diament noted, though, that the O.U.’s decision to host Gonzales should not be viewed as an official endorsement of the Republican Party platform. Previous guests of honor at O.U. dinners have included Sen. Hillary Clinton (D-N.Y.) and former Vice President Al Gore. At the same time, the Orthodox Union publicly distanced itself from the administration on the hot-button issue of stem-cell research. In May the group issued a statement hailing passage of a bill that would allow for federal funding of stem-cell research. Bush has vowed to veto the bill. “We have a very different position, but it’s a very respectful disagreement,” Diament said. There are some areas where the administration and the Orthodox community may differ, if Sunday night is any reflection. Following Gonzales’ speech was an address by Malcolm Hoenlein, executive vice chairman of the Conference of Presidents of Major American Jewish Organizations. Hoenlein praised the Bush administration’s policies on terrorism and religious liberties. In particular, he praised the administration for designating as a terrorist group the Elehssan Society, a charitable front for Islamic Jihad. But Hoenlein also pressed Gonzales on the administration’s position on Saudi Arabia, which Hoenlein described as a major sponsor of hatred and terrorism. Saudi influence is “something which we hope will get on the agenda of the attorney general in the near future,” he said. Sarna said Hoenlein’s public rebuke may reflect a desire to emphasize that support for the White House depends on certain policies. “No Jewish community wants the administration to believe that their votes are in the bag,” he said.