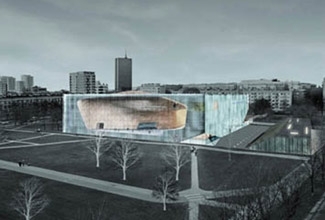 WARSAW, July 26 (JTA) — With the selection of a design from a Finnish architect, the Museum of the History of Polish Jews is closer to becoming a reality. Rainer Mahlamaeki of the Helsinki firm Lahdelma and Mahlamaeki Architects was chosen June 30 from a group of 250 architects, including Daniel Libeskind, the designer of the Jewish Museum in Berlin who is at work on the Freedom Tower in lower Manhattan, and Peter Eisenman, whose newly completed Berlin Holocaust Memorial opened in May. “The concept of the museum is to provide narrative context for the Jewish story in Poland,” Jerzy Halbersztadt, the project director for the venture, told JTA. The idea for the Polish museum started in 1994, after the creation of the U.S. Holocaust Memorial Museum, in Washington, for which Halbersztadt also served as project director. It will be located on the site of the Monument to the Ghetto Heroes, designed by Natan Rappaport, the current memorial to the Warsaw Ghetto Uprising, which stands in the old Jewish section of Warsaw. Halbersztadt said not disturbing the Rappaport monument, which was unveiled in 1948, was of particular concern because it has long stood as a symbol of Jewish resistance. “The architect had to have respect for the monument,” he said. “It’s the most important emotional space, and we didn’t want it diminished.” One of the main design elements of the new museum is a bridge that symbolizes the passage of Jews through history. Land for the museum was donated by the city of Warsaw, which also donated $13 million to the project. Poland’s federal government contributed an additional $13 million. Halbersztadt estimates the total cost of the building to be between $33 million and $35 million, with the balance being raised through private donations. The total cost of the project including materials is estimated at $55 million. In 2003, the Sejm, or Polish Parliament, made the decision to allocate funds for the museum. Stephen Solender, the former president of the North American federation system, United Jewish Communities, and the co-chairman of the North American Council for the museum said the U.S. House of Representatives’ Subcommittee on Foreign Operations recently put money for the project into its budget for the coming year. Solender told JTA that many people ask him why this museum should be built in Warsaw and not Jerusalem. His answer: Many Jews visit Poland each year and see only the death camps and cemeteries, never learning about the rich history of the country’s Jews, which spans a millennium. He hopes the museum — slated to break ground by the end of 2006 and open by 2008 — will teach Jewish visitors about this long history as well as the lessons of the Holocaust. “To see only death and not life is wrong,” he said. “We should remember both our tragedy and our lives.” Equally important, he said, will be for Poles to visit the museum and learn the history of Polish-Jewish coexistence. Solender hopes that the museum, which will house 58,000 visual items, will ultimately be a required field trip for all Polish school students. Halbersztadt anticipates that the museum will receive between 250,000 and 500,000 visitors each year. He hopes that the museum will play a pivotal role in supporting dozens of other Jewish-related projects and sites throughout Poland. With its educational and resource center for teachers and visitors, “it’ll serve as an orientation center to the rest of the country,” he said. Before World War II, Poland was home to nearly 3.5 million Jews. Today there are an estimated 8,000 Jews in the country, according to the World Jewish Congress. Additionally, thousands of Jewish tourists visit Poland each year, and many non-Jewish Poles have taken a serious interest in Jewish history and culture. The American businessman and philanthropist Tad Taube, whose Taube Foundation for Jewish Life and Culture is a major supporter of the museum, said he is so actively involved in the museum’s creation because he feels it is necessary to promote Poland’s storied Jewish heritage. “The museum isn’t just a beginning but an exclamation point,” he said. For Halbersztadt, telling the story of the Jews in Poland before the Holocaust “is not a contradiction” but “a necessity.” He said he recently took an American visitor to the sites of prewar Jewish Warsaw. When the tour was finished, the visitor, awed by all he had seen, asked Halbersztadt, “Is there a museum where I can learn more?” Halbersztadt smiled. “That’s exactly what we’re trying to do.”