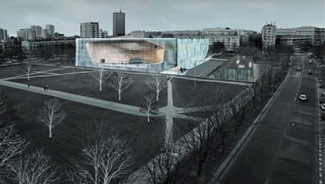 An architect´s rendering of the planned Museum of the History of Polish Jews.

(Courtesy of the Museum of the History of Polish Jews)

PRAGUE, June 25 (JTA) — Anyone who thinks the planned $58 million Museum of the History of Polish Jews doesn’t have the support of general Polish society might have to reconsider. Eleven leaders from the country’s top business and employer associations joined forces recently to announce their endorsement of the museum and to urge members to contribute financially. “For all Poles, the memory of the Jewish people is part of the history of the Polish commonwealth that should — no, must — be remembered, with all its positives and negatives,” Slavomir Majman, president of the Managers Association in Poland and a museum supporter, told JTA. Majman and his colleagues signed a petition calling on businesspeople to make donations to the museum, which is set to open in 2009 but still is short of the millions of dollars it needs to fund high-quality exhibitions. About 60 businesspeople attended the event, where association heads said they would circulate pledge sheets at their annual meetings. “When I saw these guys standing in front of the TV cameras, signing this petition without fear, I thought, ‘Is this the Poland I’ve been reading about?’ ” asked Ewa Wierzynska, the museum’s deputy director. She was referring to media coverage since the League of Polish Families, a party with a history of anti-Semitism, joined the governing coalition in April. In addition, several high-profile incidents in the past six months, including anti-Jewish comments on a well-known Catholic radio station, text-message threats against Jewish students and a physical attack on the country’s chief rabbi, have raised fears in the Diaspora for Polish-Jewish relations. It’s in this environment that some in Jewish circles privately have voiced concerns over public support for the museum project. Wierzynska has been working behind the scenes with groups like the Business Center Club, the Polish Employers Federation and the Association of Entrepreneurs, who she says have shown a very positive attitude to the museum. Museum advocates also view it as a way to show the world that the Holocaust should not be the starting and stopping point for those learning about Polish Jewry. “The museum will help people all over the world learn not just how we died in Poland, but how we lived for nearly 1,000 years,” said Stephen Solender, co-chairman and president of the museum’s North American council. “Visitors will also learn what contributions Polish Jews made to Poland and the world.” For example, he said, “Did you know that most of the early leaders of Israel were Polish-born?” The city of Warsaw donated $13 million and a plot of land for the museum next to the Warsaw Ghetto Uprising Memorial. The state provided $13 million for the museum building. The German government donated $6.31 million to the museum, and international fund-raising brought in $7 million, mostly from the United States. Still, more money is needed for an educational center and installations that will depict Jewish life over the centuries. “I was talking with the former mayor of Warsaw, Marcin Swiecicki, and we both felt the Polish business world was underrepresented” in terms of donations, Wierzynska said. “But we were a little bit shy about approaching Polish business leaders.” With the highest unemployment rate in the European Union, Poland has a lot of social needs that require charitable attention, she continued. In addition, cultural philanthropy is in its infancy in the former Communist bloc, where private support for projects the state used to pay for is still a novelty. But then she and Swiecicki, head of the Polish support group for the museum, became bolder, approaching business associations over the past few months with the attitude: “Why would Polish business leaders want to support us? The same reason we want the Polish public to support us, because it’s a part of our Polish heritage, one that has so long been neglected and forgotten.” The proof will be in the pledges, but Wierzynska thinks that signing the petition and distributing it to association members representing hundreds of thousands of businesses is a great start. “We would like the Polish business world to contribute 5 percent to 10 percent of the total cost of the museum,” she said. From a pragmatic point of view, former Foreign Minister Wladyslaw Bartoszewski told the assembled group that the museum was their “passport” to foreigners and could be a “talking piece” when they present themselves to clients. “I remember the time when 30 percent of Warsaw’s population was Jewish,” Bartoszewski reportedly said at the gathering. “The world must know that this museum is being raised by Polish hands.” Wierzynska, who recently returned to Poland after a 22-year stint in the United States, said she took heart from the developments. “Reading the Polish press, there is constant discussion of the problem of anti-Semitism, and I wondered, not as the museum deputy director but as a private person, ‘Are we going backward?’ “But this ceremony was really heartening,” she continued. “I felt we as Polish people had made progress, and it cannot be stopped.”