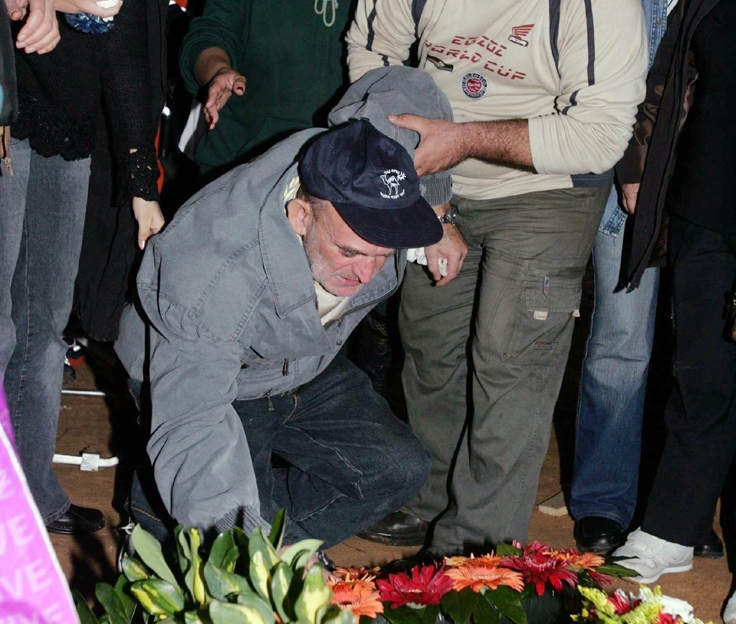 Sderot resident Michael Slotzker touches the grave of his wife Faina, who was killed by a Palestinian Kassam rocket Nov. 15. (Israel Sun/Courtesy of SELAH)
Advertisement

PARIS (JTA) – Sderot-area residents came here trying to tell the world how Kassam rockets fired at their town by the Palestinians were ruining their lives.They arrived in the French capital armed with stories like this one from Miri Levin, a high school art history teacher in Sderot who lives nearby on Kibbutz Erez, next to the Gaza border:”The Kassam rockets fall every morning around 7 a.m. when the kids are going off to school,” Levin said. “The Palestinians know that is a very sensitive moment every day. So the kids don’t go to school anymore. Their lives are ruined now.”The Israelis hope that increased attention might speed diplomatic efforts to halt the attacks. Unfortunately for Levin and the others in her group, few outside the local Jewish press were interested in passing along their stories.”We called our friends in the press, but they didn’t show up,” said Nina Ben-Ami, a spokeswoman at the Israeli embassy here.Levin was one of four visitors from Sderot and the Erez and Nir-Am kibbutzim who had come to speak at a press conference in Paris as part of a European tour to drum up coverage for the Israelis as the Kassams rained down on them from the Gaza border.About 40 French- or English-speaking residents from the area are visiting cities such as Brussels, Bern, The Hague, London and Paris in a mission organized by the Israeli Ministry of Foreign Affairs, the Jewish Agency and the World Zionist Organization.Along with the local Jewish press, Israeli correspondents from Ma’ariv and Yediot Achronot were on hand at the Paris news conference. So were a couple of television stations.George Adjedj, an official in the Sderot mayor’s office, said he spoke with a journalist from Radio Monte Carlo, an important Arabic-language radio station that broadcasts to the Middle East and North Africa.”He was Algerian and we even talked about Algiers, where I was born and raised,” said Adjedj, a Sderot resident since 1970. “But I didn’t speak with any French French journalists.”Ben-Ami said she did not know what the coverage was like in the other European cities Sderot residents traveled to.”The press is a tricky business,” she said. “There are a lot of other things on the French media agenda. But I would not call this a failure.”The visitors later told their stories over lunch at the headquarters of the umbrella group of Jewish religious organizations in France, the Consistoire de Paris.”I was returning to my car in the center of Sderot after buying cigarettes when I heard the whistle of the Kassam passing overhead,” Adjedj said. “It landed two meters from me and did not explode.” He touched the kipa on his head.”My 5-year-old grandchild Adar tells me to come play with her in the safe room of my house,” he added. “She refuses to sit in the living room.”Adjedj said the “uncertainty is killing us. And I am sure that on the other side of the border, there is a Palestinian grandfather who is saying the same things as I am. He is fed up also, but cannot convince the Hamas people to put down the rockets.”Avi Kadoch, a community affairs manager and resident of Kibbutz Nir-Am – near the Palestinian town of Beit Hanoun in Gaza – talked about how the dreams of developing the region have been broken.”How can we talk about cultural and industrial projects now?” Kadoch asked.He said he would support a group that brings together Gaza and Sderot-area residents to do a joint tour of Europe.”I’m sure that a joint delegation would attract more press and might bring some kind of awareness and pressure from the Europeans,” Kadoch said. “Then again, perhaps it is not possible to organize a joint delegation.”Consistoire President Joel Mergui said he would like to bring the Israelis’ suffering to the attention of more French politicians.”The first step in that process was the French press,” he said.Adjedj noted that the largest numbers of foreign delegations visiting Sderot under the rocket attacks have been coming from France, but added that others have also come.”We had a delegation of Eskimos who came and did a religious ceremony in full dress in the streets,” he said with a smile. “They sang and danced to push back the rockets. It didn’t work, but it made us feel good for the day.”The 10 people at the Consistoire lunch laughed for a moment.Levin then turned serious as she looked for the words to express her feelings.”I am not afraid and I am not angry,” she said. “I would like to be able to talk to the Palestinians in Gaza. We used to have regular contact with them, but not anymore.”Our young people know nothing about them, but are afraid and angry. Even though a rocket hit a classroom in school recently, we decided to keep the school open. I go every day to school but we have no students. It is very sad.”With a determined look, Levin added, “I have been on Kibbutz Erez for 35 years. I am not going to leave. That’s for sure.”