Court will rule on anti-Zionist’s kids 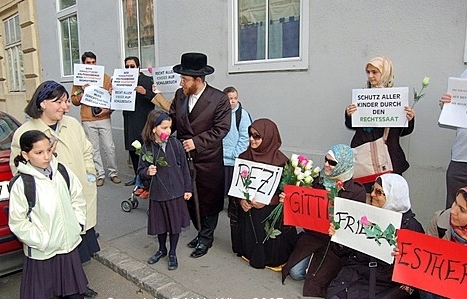 PRAGUE (JTA) – Moishe Ayre Friedman’s children may be paying for the infamy of their father, an anti-Zionist Jew who attended a Holocaust denial conference in Tehran.Five of his children were expelled from their private Orthodox Jewish school in Vienna about a month after Friedman, dressed in Chasidic attire, was shown in media outlets worldwide warmly shaking hands with Iranian President Mahmoud Ahmadinejad.Despite a court order, hundreds of thousands of dollars in fines and the threat of closure, Machzikei Hadas won’t let them return – a position that apparently is receiving unqualified support from the school’s parents, the umbrella group of Vienna Jewry and a number of Orthodox rabbis who serve the parents. The Friedman children are in educational limbo while a trial to determine whether Machzikei Hadas had the legal right to expel them starts Tuesday in a Vienna district court. Some legal experts predict the case may go on for months or even years.Meanwhile, the children are not attending school. The Ministry of Education offered them placement in public schools, but Friedman said those schools were were not suitable for religious children.At the heart of the conflict is the question of whether the school is punishing the children because of their father’s actions or, as the school maintains, protecting its students from youngsters who parents fear enthusiastically
support their father’s anti-Israel opinions and Holocaust revisionism.The Friedman children were told they would not be welcomed back
to school following their monthlong vacation in the United States at the end of January.Friedman, 35, sued to demand their re-entry, but a Vienna district court upheld the expulsions. In March, however, a federal court ruled that until the case was
concluded, the four older children – girls aged 8 to 13 – must be
allowed back into Machzikei Hadas. The court accepted Friedman’s argument that the children were being
unfairly punished for his activities.The Austrian Supreme Court upheld that ruling
June 1.Machzikei Hadas, however, is defying the court order to allow the children to return. It has incurred fines of 600,000 euro – about $800,000 – plus several thousand more for each day the children are not permitted entry.Still, parents of
Machzikei Hadas students are sticking by the school, the oldest of four Jewish schools in Vienna and one of only two that serves mainly the fervently Orthodox. Several spoke with JTA on
condition of anonymity, saying they feared Friedman would retaliate
against them.”This is a private school for the needs of our
community, we should have the right to decide who our children should
mingle with,” said a father with two children at the school.
“Friedman’s kids cheer every time there is a suicide bombing in
Israel. This is not something I want my children exposed to.”A
father with three children at the school told JTA, “Is it right to
punish the children for their father’s misdeeds? Absolutely not. But if
the kids are affected by the way the rabbi acts, that’s something else.”Josef
Klein, the principal at Machzikei Hadas, offered several arguments
on why the school had a right to keep the children from
returning, including the non-payment of school fees over
eight years. He also said Friedman signed a contract stating
that the children’s behavior must be in accordance with school
standards “Following a suicide bombing in Israel, his son who
has finished the school already cheered and told his fellow students
that he too would like to be a suicide bomber,” Klein said. “He also
came to school and said my father is the most important rabbi in
Vienna, he has contacts with all the police and if you say something he
will get your father in jail.”

Klein said the parents did not want a repeat of such an experience. He also said they had pushed for Friedman’s children to be expelled well before Friedman attended the Tehran conference.Friedman,
incensed when informed of such accusations, said his children had
always received top marks, which the school confirmed. He also said they were model pupils in their behavior. Friedman also denied ever signing a contract with the school.”The school is using Nazi methods against their own Jews,”
Friedman said in a phone interview with JTA. “They are Jewish gangsters; there
is an Israeli security guard who is physically keeping my children out
of the school every day.”
Friedman moved to Vienna from Belgium in 1988 and has been at odds with the local Jewish community for nearly as long. He infuriated
its leaders by making anti-Israel statements while claiming to be
the chief rabbi of Vienna and, according to the Jewish Community of Vienna, trying to take over a synagogue for his own
financial gain. The congregation is now defunct.The
Jewish Community, an umbrella group with 7,500 members, claims Friedman was never ordained. He
is without a congregation and is unwelcome at Vienna synagogues.Friedman, who is from a New York Satmar family, was ejected from the community following a cherem, or ban, by several major Orthodox groups after his participation in the
Tehran conference. At the conference, Friedman reportedly said 1 million
Jews were killed in the Holocaust rather than the historically accepted
figure of 6 million.Further complicating the school case, the
building’s owner is an Auschwitz survivor who refuses to
allow Friedman’s children into the school.