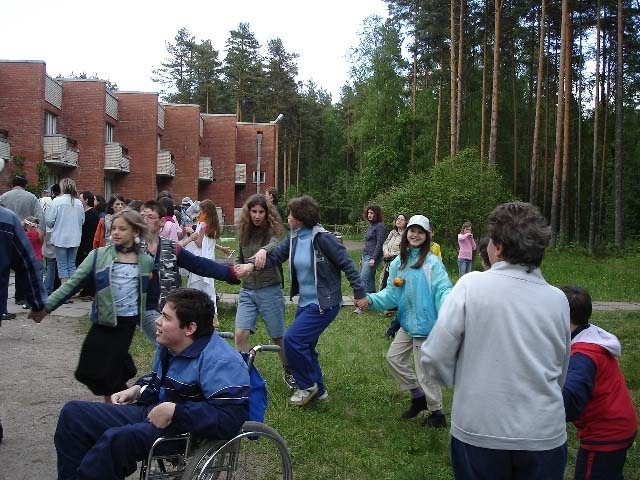 ST. PETERSBURG, Russia (JTA) – Spending part of last summer at a Jewish camp near St. Petersburg was somewhat of a culture shock for Texas-raised Jenny Mayants – and she can’t wait to go back.Mayants, 17, spent several weeks at the camp speaking Russian, her native tongue but one she left behind as a child when her parents moved to the United States. The camp outside Russia’s second-largest city is thousands of miles from her home in Sugar Land.Her parents wanted their daughter to get to know their homeland and improve her Russian, the language still spoken at home.The Mayants family isn’t alone. Increasing numbers of immigrants from the former Soviet Union are eager to pass on their language and cultural heritage to their children, and summer programs in the Old Country seem an effective way to accomplish the goal.Yevgenia Lvova runs the Adain Lo Jewish family network in St. Petersburg, which operates eight kindergartens, a Jewish day school, and summer and winter youth camps. A few years ago she discovered that some of the applicants for her summer camp were the children of Russian-born parents now living in the United States.”To them this is always a big culture shock,” Lvova said of the American campers’ experience. “Many of them don’t have enough Russian. But after a few days they are fully integrated.”Mayants recalls the first few days being difficult. All she knew about youth camps in Russia was the Young Pioneer camp her father attended as a youth.”He told us how they’d pick berries,” she said. “I was so afraid I’d have to do that. People joked that I was going off to a labor camp.”But as one of the few Americans there, Mayants quickly found herself a minor celebrity. “It was really cool,” she said. “I’d never experienced people being fascinated with me because I was American.”Until this year Lvova never made any special attempts to reach out to Russian-speaking parents in North America. But this year she said she will reach out to these families using her ties with some North American Jewish federations, letting these former Soviet citizens know that the St. Petersburg Jewish camp is open to them and their children.Lvova believes that bringing children from the former Soviet Union to these camps helps in many ways. It helps the Russian Jewish children feel a part of the global Jewish family.”This global Jewish link is something our children may still be missing,” she said.And it helps the Russian Americans get in touch with their parents’ cultural heritage.”We very much want to help these families transmit their Russian culture, their Russian values, to their American kids,” Lvova said. After only a few days in the camps the American children – most of whom speak Russian only at home – begin to speak better Russian.Vera Yudovina left St. Petersburg in 1998 when her son Zachary was a year-and-a-half old, settling in Cleveland. Three years later they came back for a visit, Zachary’s only return home until last summer, when he attended the four-week Jewish day camp in St. Petersburg.Yudovina and her husband went with him because he was just 9 years old and had no relatives to host him.”We sent him to keep the language, first of all,” Yudovina said. “Some of our children forget Russian completely. Even if they speak Russian – and our son does – they think of it as an ‘adult’ language. Only adults speak it. And as teens, whatever adults do is not cool. It was important for him to see other children speaking Russian.”The immigrants of 30 years ago rarely passed on the Russian language to their children, Yudovina said, as the Russian-speaking community in North America wasn’t large enough for that to be realistic. She hopes it will be different for Zachary because of his Russian camping experience.Yudovina figures it’s even more important for her and her husband that Zachary keep up his Russian than it is for him. As her generation ages, she says, their English will recede and they will only be able to express themselves in Russian.”We’ll never be able to fully communicate with him in English; Russian is our language,” Yudovina said. “We will definitely lose something if we only speak to our children in English.”Galina Golant lives just outside Portland, Ore., with her husband and two children. The boys, 11 and 9, spent two weeks at the camp last summer. Galina and her husband left St. Petersburg in 1991, before Aaron and Benjamin were born. “We sent them for a few reasons,” Golant said. “I want them to hear the Russian language, to see the place where I was born, to visit my parents. The camp was a good opportunity for them to be with other kids, communicate with them.”Lvova thinks the American children can teach their Russian peers, too, without even knowing it.”These children are more free, they are more open and more aimed at success in life,” she says. “Our kids can learn from them.”Mayants, who speaks fast, accentless English, led English lessons for her fellow campers last year at the suggestion of the camp director. Eight or nine girls her age spent an hour with Mayants each day.”They were so fascinated by me,” she said. “Sometimes they’d ask me to talk about
my life, what my house is like, what I do in my free time. They don’t
get cars at 16 like we do. And they’d tell me about their lives. It’s
so different, but so cool.”

Cool, too, was the new Russian slang she picked up.”I
learned a lot of slang that even my parents don’t know,” she said.JTA correspondent Sue Fishkoff in California contributed to this story.