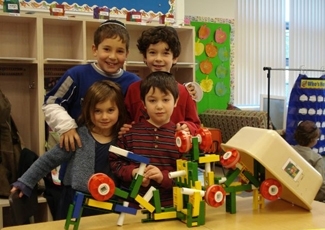 Third-graders and their kindergarten reading buddies at the Posluns Education Centre, one of 11 Toronto Jewish day schools that will be helped by a $2 million gift. (Courtesy of Associated Hebrew Schools of Toronto)
Advertisement

TORONTO (JTA) – Cash-strapped elementary Jewish day schools in Toronto will get an annual infusion of $2 million for at least four years.

Longtime Canadian philanthropists Henry and Julia Koschitzky are giving the 11 schools half the amount; the remainder will be matched by the United Jewish Appeal-Federation of Greater Toronto.

A UJA-Federation spokesman, Howard English, said the money will go to the schools based on the number of subsidized students. The funding will be retroactive to the beginning of this school year.

Of the approximately 5,000 students in Toronto’s Jewish elementary schools, about 1,500 receive tuition subsidies.

“The school can use it as they wish, but we certainly hope that by benefiting the bottom line they’ll be able in turn to benefit tuition-paying parents,” English said.

Toronto’s Associated Hebrew Day Schools has run deficits for the past few years. Henry Koschitzky is a past president.

“We recognized the fact that all the day schools are in financial crisis, and the main reason is federation money only goes part way towards covering their deficits,” he said.

Koschitzky said he was motivated to act when he learned that community subsidies cover only half of the actual subsidies schools allot to families who cannot afford full tuition.

“If something wasn’t done, eventually you’d find that the only schools that would survive are the elitist schools that don’t have any subsidized parents,” he said. “So you’d just get a situation where you only have the schools where parents can pay full tuition. The majority of day schools could not survive.”

Koschitzky said schools that qualify for the new money will need to have a minimum number of hours of instruction in Hebrew and Tanach, or Bible.

Excluding the new funding, which was announced last week, the federation currently provides about $8 million in tuition subsidies.

Tuition at Toronto elementary day schools ranges from $10,500 to more than $14,000 a year. Ontario is one of three jurisdictions in Canada where the provincial government provides no public funds for Jewish education.

Koschitzky said he wasn’t motivated by the recent loss in the provincial election of the Progressive Conservative Party, which had promised if elected to fund all faith-based education in Ontario. The move would have placed Jewish schools on par with Catholic schools, which have received full funding since 1984.

“Sure, it would have a lot to do with it if they had given us a lot of money,” Koschitzky said. “Then I wouldn’t have to worry about it. [But] the fact of the matter is, I didn’t really expect anything anyway.”

Koschitzky said the new funding is targeted only to elementary schools. Otherwise, “you’d just get more people cutting into the pie.”

English, who called the Koschitzkys’ gift “extraordinary,” said he expects the money to continue beyond the four-year period.

Last year, a federation report on the future of Jewish day schools in Toronto recommended setting up a $100 million education endowment fund.

English said the federation is working on establishing such a fund by next spring and that donors are being approached to form partnerships “in the same fashion as with the Koschitzkys.”

As a result of the new funding, UJA-Federation of Greater Toronto will be investing more than $15 million annually toward formal and informal Jewish education.